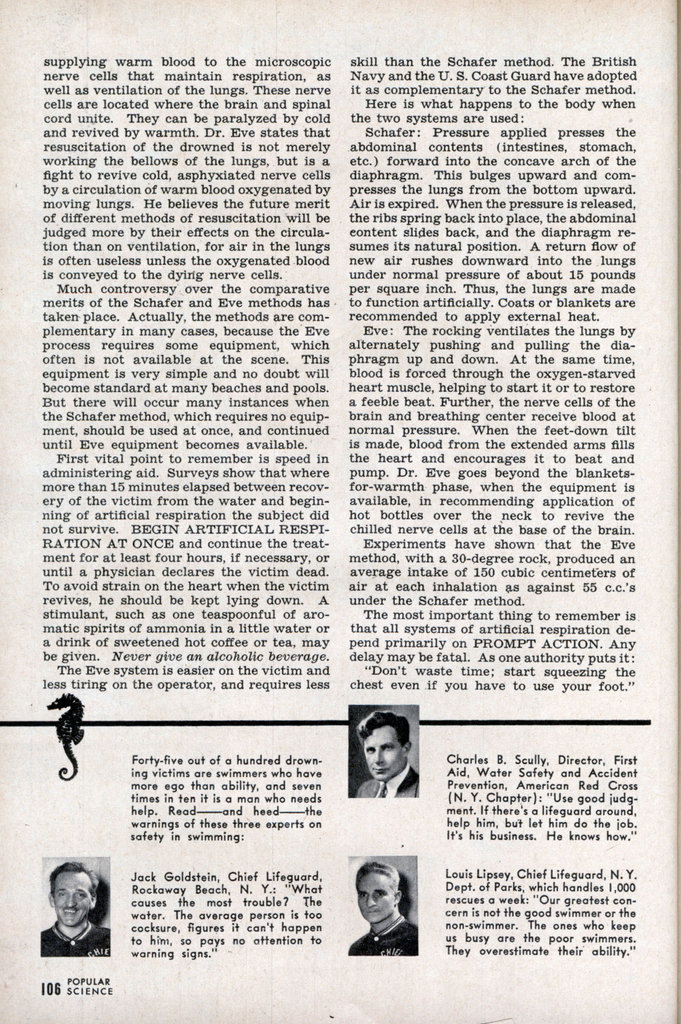 Fifty Chances a Day to save a life!

EVERY day in July and August an average of 50 persons will drown in the United States. Between May 1 and September 1, no other type of accident will take a greater toll of life, except possibly automobile mishaps, which caused more than 28,000 deaths in 1945 (See PSM, Apr. ’46). The grim race between the two destroyers will be close.

Drownings rank fourth in the annual accident rate, being outstripped by automobiles, falls, and burns, but between May Day and Labor Day they are the prime contender for Public Accident Enemy Number One. This year, a tremendous pilgrimage from the cities to water resorts is expected. Approximately 100,000,000 people will go swimming. Nearly 200,000 will be rescued from drowning. About 10,000 will drown!

The country’s lifesaving organizations have done a monumental job of protection. During the past 33 years the number of swimmers has increased five-fold, yet the number of drownings has been cut in half. Despite this, there is still one chance in 500 that you will need the help of rescuers every time you enter the water. Last year, when drownings dropped sharply, they still accounted for more deaths than any other type of public accident except automotive.

Swimming accidents are not the only water peril. Nearly 20 percent of immersion deaths occur to persons who are fishing, working in the water, or boating. The popular postwar surge to boat ownership gravely concerns safety authorities. Thousands are buying war-surplus vessels ranging from rubber life rafts to amphibious landing craft. Boatbuilding companies are swamped with orders. All these customers are potential victims of immersion, especially those who are novices at seamanship and navigation.

The safety organizationsâ€”National Safety Council, Red Cross, Boy Scouts, U. S. Coast Guard and othersâ€”know why there are so many drownings. Basically, the reason is that 90 percent of those who seek recreation in and on the water either are poor swimmers or can’t swim at all. Men are watched most closely by the lifeguards, because two-thirds of the time it is a man who needs help. The average fellow thinks he is quite an aquatic performer, is susceptible to dares, and usually is ignorant of the hidden dangers created by shifting sands, currents, tides and winds.

Will you, or a member of your family, or a friend be one of the 50 daily victims of drowning this and next month? Not if you adhere to the list of DON’Ts, prepared for PSM by leading water safety authorities and pictured on the two following pages.

If you get in trouble, and IF you are gotten onto land, and if you require artificial respiration, there is about one chance in four that you will be revived. In cases where others require this service, you may have the opportunity to save a life, so you should know what happens when a person drowns, and you should know the most efficient methods of artificial respiration.

When a person drowns, he is actually suffocated by inhalation of water during violent efforts to breathe. The brain is denied its customary supply of oxygen and begins to lose its function. The victim becomes unconscious, stops breathing. Life may or may not be extinct. The body is wet and evaporation is reducing body temperature, making death all the more certain. Artificial respiration is required immediately.

Modern artificial respiration was first attempted, in a primitive fashion, in 1774, on the advocacy of the Royal Humane Society. The pipe of a bellows was inserted in one nostril and the other nostril was closed. Air was forced into the lungs and then expelled by pressing the chest. Thus respiration was imitated. About the middle of the 19th century improved methods were introduced by Drs. Hall, Silvester, and Howard. In 1903 Dr. E. A. Schafer of Edinburgh, Scotland, devised the prone-pressure method. In 1927 the U. S. Public Health Service adopted a standard technique for this method, and many other American organizations followed suit. The Red Cross is its particular champion.

Two years ago Dr. Frank C. Eve, of- England, disclosed a new method of resuscitation. The Eve method stresses circulation and warmth directed to supplying warm blood to the microscopic nerve cells that maintain respiration, as well as ventilation of the lungs. These nerve cells are located where the brain and spinal cord unite. They can be paralyzed by cold and revived by warmth. Dr. Eve states that resuscitation of the drowned is not merely working the bellows of the lungs, but is a fight to revive cold, asphyxiated nerve cells by a circulation of warm blood oxygenated by moving lungs. He believes the future merit of different methods of resuscitation will be . judged more by their effects on the circulation than on ventilation, for air in the lungs is often useless unless the oxygenated blood is conveyed to the dying nerve cells.

Much controversy over the comparative merits of the Schafer and Eve methods has taken place. Actually, the methods are complementary in many cases, because the Eve process requires some equipment, which often is not available at the scene. This equipment is very simple and no doubt will become standard at many beaches and pools.

But there will occur many instances when the Schafer method, which requires no equipment, should be used at once, and continued until Eve equipment becomes available.

First vital point to remember is speed in administering aid. Surveys show that where more than 15 minutes elapsed between recovery of the victim from the water and beginning of artificial respiration the subject did not survive. BEGIN ARTIFICIAL RESPIRATION AT ONCE and continue the treatment for at least four hours, if necessary, or until a physician declares the victim dead. To avoid strain on the heart when the victim revives, he should be kept lying down. A stimulant, such as one teaspoonful of aromatic spirits of ammonia in a little water or a drink of sweetened hot coffee or tea, may be given. Never give an alcoholic beverage.

Here is what happens to the body when the two systems are used:

Schafer: Pressure applied presses the abdominal contents (intestines, stomach, etc.) forward into the concave arch of the diaphragm. This bulges upward and compresses the lungs from the bottom upward. Air is expired. When the pressure is released, the ribs spring back into place, the abdominal content slides back, and the diaphragm resumes its natural position. A return flow of new air rushes downward into the lungs under normal pressure of about 15 pounds per square inch. Thus, the lungs are made to function artificially. Coats or blankets are recommended to apply external heat.

Eve: The rocking ventilates the lungs by alternately pushing and pulling the diaphragm up and down. At the same time, blood is forced through the oxygen-starved heart muscle, helping to start it or to restore a feeble beat. Further, the nerve cells of the brain and breathing center receive blood at normal pressure. When the feet-down tilt is made, blood from the extended arms fills the heart and encourages it to beat and pump. Dr. Eve goes beyond the blankets-for-warmth phase, when the equipment is available, in recommending application of hot bottles over the neck to revive the chilled nerve cells at the base of the brain.

Experiments have shown that the Eve method, with a 30-degree rock, produced an average intake of 150 cubic centimeters of air at each inhalation as against 55 c.c.’s under the Schafer method.

The most important thing to remember is that all systems of artificial respiration depend primarily on PROMPT ACTION. Any delay may be fatal. As one authority puts it:

“Don’t waste time; start squeezing the chest even if you have to use your foot.”