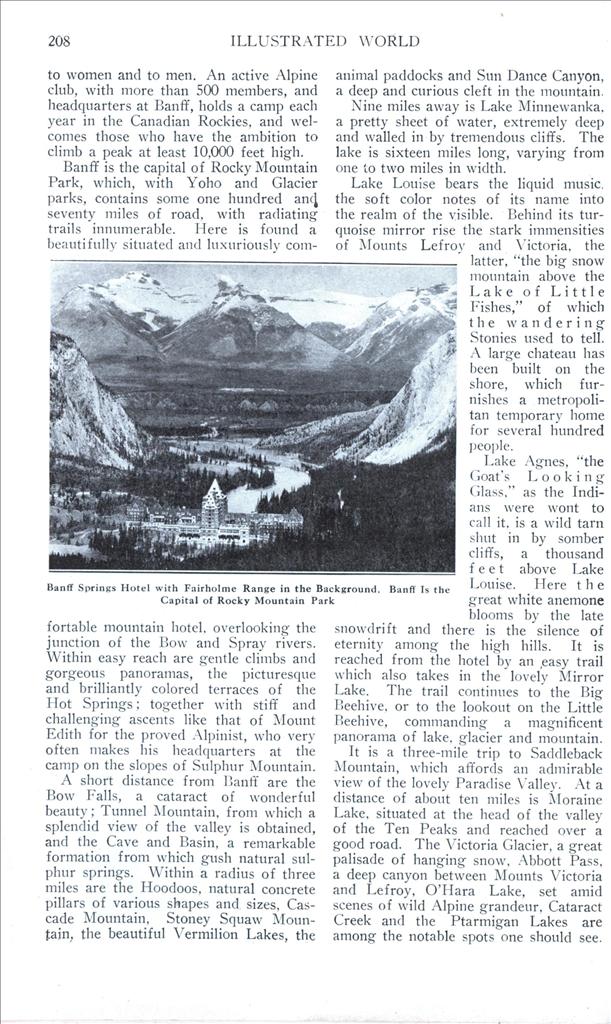 Edward Whymper, the hero of the majestic Matterhorn, after exploring the Canadian Rockies, described them aptly as “fifty Switzerlands thrown into one.” And those who have visited both series of mountains agree that this mountaineer did not in the least exaggerate the truth.

Snowy peaks, glaciers, rugged precipices, waterfalls, foaming torrents, canyons, lakes like vast sapphires and amethysts set in the pine-clad mountains —these have been flung together in unparalleled profusion on a scale which Europe has never known.

Here in this wonderland on the roof of the world, this bit of the raw glacial era let down into neat and finished North America, the Canadian Government has preserved four National Parks. Altogether there are more than 500 miles of the most wonderful carriage roads in the world; pony trails innumerable, between straight pine trunks; blue valleys that yawn to extreme depths; automobile roads galore, such as the Highway of the Great Divide.

It is difficult to imagine anything more fascinating than to start out in the early morning, stepping in half an hour from the perfect civilization of a luxurious hotel into the primitive glory of cliff and crag, winding waterway and frozen grandeur, to spend the day among the mountains.

With a blue sky overhead, the air soft with the sweet resinous space of the forest, and all cares left far behind, one sees only beautiful sights, hears only wonderful sounds, and for a whole long day lives close to the very heart of nature in her most splendid mood.

There are climbs both strenuous and easy, long and short, appealing equally to women and to men. An active Alpine club, with more than 500 members, and headquarters at Banff, holds a camp each year in the Canadian Rockies, and welcomes those who have the ambition to climb a peak at least 10,000 feet high.

Banff is the capital of Rocky Mountain Park, which, with Yoho and Glacier parks, contains some one hundred and seventy miles of road, with radiating trails innumerable. Here is found a beautifully situated and luxuriously comfortable mountain hotel, overlooking the junction of the Bow and Spray rivers. Within easy reach are gentle climbs and gorgeous panoramas, the picturesque and brilliantly colored terraces of the Hot Springs; together with stiff and challenging ascents like that of Mount Edith for the proved Alpinist, who very often makes his headquarters at the camp on the slopes of Sulphur Mountain.

A short distance from Banff are the Bow Falls, a cataract of wonderful beauty; Tunnel Mountain, from which a splendid view of the valley is obtained, and the Cave and Basin, a remarkable formation from which gush natural sulphur springs. Within a radius of three miles are the Hoodoos, natural concrete pillars of various shapes and sizes, Cascade Mountain, Stoney Squaw Mountain, the beautiful Vermilion Lakes, the animal paddocks and Sun Dance Canyon, a deep and curious cleft in the mountain.

Nine miles away is Lake Minnewanka. a pretty sheet of water, extremely deep and walled in by tremendous cliffs. The lake is sixteen miles long, varying from one to two miles in width.

Lake Louise bears the liquid music, the soft color notes of its name into the realm of the visible. Behind its turquoise mirror rise the stark immensities of Mounts Lefroy and Victoria, the latter, “the big snow mountain above the Lake of Little Fishes,” of which the wandering Stonies used to tell. A large chateau has been built on the shore, which furnishes a metropolitan temporary home for several hundred people.

Lake Agnes, “the Goat’s Looking Glass,” as the Indians were wont to call it, is a wild tarn shut in by somber cliffs, a thousand feet above Lake Louise. Here the great white anemone blooms by the late snowdrift and there is the silence of eternity among the high hills. It is reached from the hotel by an ,easy trail which also takes in the lovely Mirror Lake. The trail continues to the Big Beehive, or to the lookout on the Little Beehive, commanding a magnificent panorama of lake, glacier and mountain.

It is a three-mile trip to Saddleback Mountain, which affords an admirable view of the lovely Paradise Valley. At a distance of about ten miles is Moraine Lake, situated at the head of the valley of the Ten Peaks and reached over a good road. The Victoria Glacier, a great palisade of hanging snow, Abbott Pass, a deep canyon between Mounts Victoria and Lefroy, O’Hara Lake, set amid scenes of wild Alpine grandeur. Cataract Creek and the Ptarmigan Lakes are among the notable spots one should see.

Emerald Lake, green as its name, is a seven-mile drive from Field. Takakkaw means “It is wonderful!” And even the stoical Indian had to admit that the falls in the Yoho Valley that now bear this curious name deserved the exclamation.

In the heart of the Selkirks, an admirable center for Alpine climbing-, is Glacier. There are two very fine glaciers within easy reach of the hotel—one, indeed, the Illecillewaet Glacier, may be said to be in the yard of the hotel. Glacier Park covers 468 square miles and is a paradise for those in search of Alpine flowers—over 500 varieties blooming every summer.

Farther to the left are sharp peaks—Uto, Eagle. Avalanche, and Macdonald. Rogers Pass and the snowy Hermit Range, the most prominent peaks of which are called the Swiss Peaks, are in full view. Again, to the left, at the west end of the Hermit Range on the south side of Bear Creek, comes Cheops, so named after the Great Pyramid, the tomb of the Pharaoh Khufu, and in the foreground, and far down among the trees, the Ille cillewaet Glacier glistens across the valley.

Less than two miles from the hotel and tumbling from an altitude of 9,000 feet on the sky line, to 4,800 feet at the forefront, the great Illecillewaet Glacier covers ten square miles and is easily reached in one hour over an excellent trail.

Away beyond the magnificent Jasper portals of the charming Athabaska Valley, through which the new trans-continental rail-way traverses the Canadian Rockies, southwest of Edmonton, lies a vast, wide, wild, unsubdued Alpine wonderland, rich in peerless scenic grandeur, and wild regions hallowed by history, by Indian legend and by the romance of picturesque voyageurs, the coureurs dc bois and the path-finders of the fur trade, who built the foundations of an empire under the setting sun.

This glorious heritage of the Canadian people—a heritage which never can be alienated, as it has been vested forever in the name of the nation as the Jasper National Park—is an illimitable sanctuary for the work-a-day world, far from the strife and bustle of the market place and in contact with nature, peaceful, pure and undefiled.

Here is every diversity of natural features to delight and gratify the mountaineer, the explorer, or to interest and revivify the tourist. It is an expanse of indescribably sublime grandeur, with an ocean of glorious, majestic, virgin peaks comprised within the numerous well-defined ranges, snow-capped and glacier-scored, which tower above a continental watershed wherein are the headwaters of five mighty rivers.

Across Jasper Kale lies the site of Hawes (Jasper House), an historical landmark of the early days, but now all semblance of the old times has disappeared. It was built about 1800 and noted by Franchere in 1814. This house was an important post of the Hudson’s Bay Company and in 1817 was in charge of an old clerk, Jasper Hawes, and it was from his Christian name that the house was called “Jasper.” Thus, Canada’s great park is named after a man whose part in early Western history was important.

Mount Robson lies only a few miles north of the Valley of the Fraser, to the west of the Yellowhead Pass, through which the railway threads its way. This territory has been named Mount Robson Park, after the great peak. The view of the mountain from that side is one of the most impressive in the whole range of Alpine scenery.

But Mount Robson is not all of the region. Resplendent Valley, from one point, shows twenty-five towering-peaks and seven glaciers descending into it, all of which have superior ice-falls. The Swiss guide, fresh from the monarchs of his native land, exclaimed in wonder, “I can see as many mountains as there are in the whole of Switzerland;” and he was looking in only one direction.