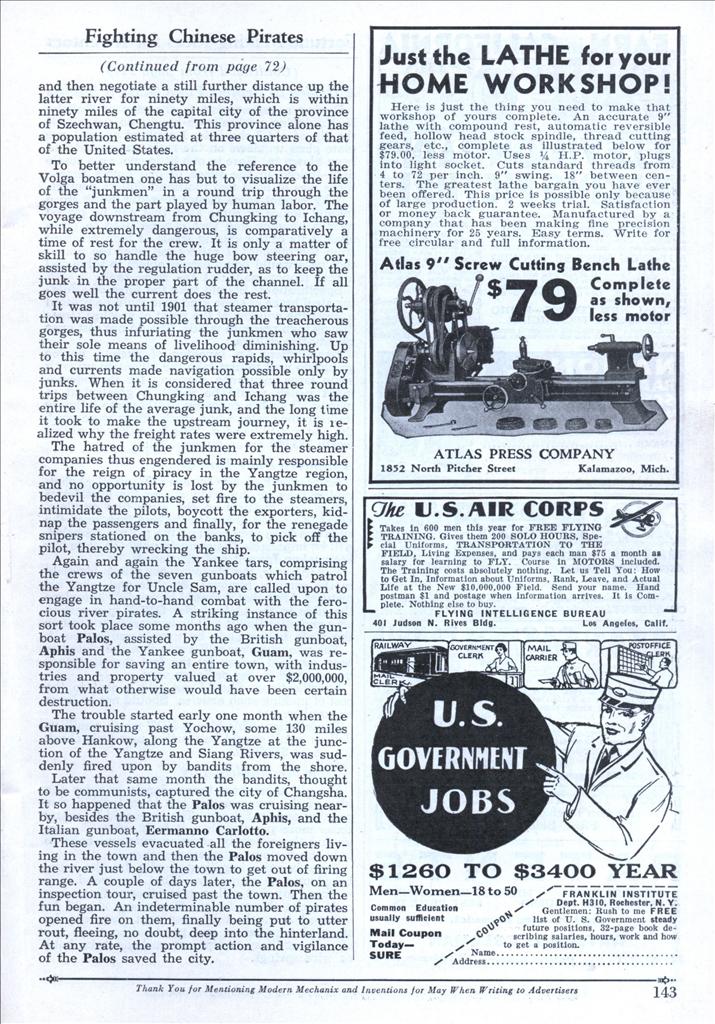 Seven Yankee gunboats, patrolling the Yangtze river in conjunction with those of other nations, wage constant war against the bandits who infest this district which boasts one-third of the world’s population. Little known activities of this romantic branch of the foreign service are described in this article.

WHILE riding through an almost endless succession of dangerous rapids, whirlpools and currents in the Yangtze River, about 160 miles above Hankow, a merchant vessel operated by an American, named Captain Baker, suddenly went aground. It was night-time and a stone’s throw away could be dimly seen the craggy outlines of the shore.

Nine times out of ten such an accident results in a bandit attack in this remote section of China. But hardly had the American given the order to his Chinese crew to arm themselves when things began to happen. Not a single warning sound was heard and yet, within five minutes’ time, every coolie had been disarmed and bound by as villainous a gang of cutthroats as Baker had ever seen. Armed with sawed-off shotguns and wearing filthy rags, they looked as if they would commit murder for a dollar.

However, their leader calmly announced that he would release the American upon receipt of two million dollars! Of course he did not make good on this fantastic demand, but his thugs seized Baker’s boat containing perhaps $10,000 worth of cargo, and kept him prisoner for three months. At which time, thanks to friends, Baker raised a couple of thousand dollars and was freed.

Such instances happen again and again in the region of China’s mightiest river, which rises in the snow-capped mountains of Tibet and winds its way irregularly in a generally seaward direction for nearly three thousands miles to the ocean, emptying into the Yellow Sea a few miles from Shanghai.

Small wonder, what with trade transactions such a tremendous gamble and human life a thing to be sneered at, that the gunboats of our Navy, Great Britain, France, Italy and Japan, regularly patrol the length of the Yangtze for nearly 1,700 miles, a distance as great as that from the mouth of the Mississippi to Hudson Bay, Canada.

The American patrol force consists of seven regular gunboats and, according to the seriousness of the emergency, any one of four “spare” gunboats. Each vessel carries three to four ship’s officers, one doctor, and a crew of about 50 enlisted men. The boats are distributed throughout the Yangtze region as follows: At Hankow, 600 miles up the river, is the regular operations base for the Luzon, flagship of the force, under command of Rear Admiral Yancey S. Williams, besides the gunboats USS Palos, Tutuila and Cahu; 500 miles up the river is the base for the gunboat, Panay, at Mowangtsui; at Ichang, 1,000 miles up the Yangtze, is the gunboat Monocacy; and at Chungking, 1,500 miles up the river, is the gunboat, Guam. At Nanking, 150 miles up the Yangtze, no regular patrol boats operate, but in emergency cases any one of the following seagoing gunboats is utilized: either the Fulton, the Asheville, the Tulsa or the Sacramento.

The British maintain about 12 gunboats with similar personnel and procedure as the Americans; the Japs have about the same number; the French, three boats, and the Italians, one.

Untold millions of dollars worth of foreign capital are tied up in industries located in the Yangtze region patrolled, which region, by the way, contains about a third of the world’s entire population. The city of Hanyang, the Pittsburgh of China, with its towering steel mills, adjoins Hankow, but is separated from it by the Han River and diagonally across the Yangtze on the south bank eight miles away is Wuchung; geographically these three cities are not unlike Manhattan, Brooklyn and Jersey City.

That romance and adventure are not alone the lot of those who “go down to the sea in ships,” but also of those who go up the Yangtze in gunboats, is more readily understood when the nature of their tasks is better known.

Well advertised have been the Volga boatmen, famous in Russian lore. But when one learns of the endless toil of the Chinese in “tracking” junks throughout the countless years in navigating that part of the Yangtze River known as the “gorges,” more than a thousand miles upstream, one wonders how indistinct is the line which divides man and beast.

From Ichang, the head of navigation for moderate draft steamers, 1,000 miles up the river, and 400 miles above Hankow, which is the upstream port for oceangoing steamers, the river enters the famous Ichang gorgesâ€”a succession of dangerous rapids, whirlpools and currents. From Ichang to Chungking, a city of 300,000, the river port of the rich province of Szechwan, the distance is 358 miles. The stretch from Ichang to Wanhsien, at the upper gorges, has more than its share of “human interest.”

The American shallow draft gunboats, Palos and Monocacy, not only negotiate these dangerous waters year in and year out, but proceed 200 miles further upstream from Chungking to Suifu, at the confluence of the Yangtze and Min Rivers, and then negotiate a still further distance up the latter river for ninety miles, which is within ninety miles of the capital city of the province of Szechwan, Chengtu. This province alone has a population estimated at three quarters of that of the United States.

To better understand the reference to the Volga boatmen one has but to visualize the life of the “junkmen” in a round trip through the gorges and the part played by human labor. The voyage downstream from Chungking to Ichang, while extremely dangerous, is comparatively a time of rest for the crew. It is only a matter of skill to so handle the huge bow steering oar, assisted by the regulation rudder, as to keep the junk in the proper part of the channel. If all goes well the current does the rest.

It was not until 1901 that steamer transportation was made possible through the treacherous gorges, thus infuriating the junkmen who saw their sole means of livelihood diminishing. Up to this time the dangerous rapids, whirlpools and currents made navigation possible only by junks. When it is considered that three round trips between Chungking and Ichang was the entire life of the average junk, and the long time it took to make the upstream journey, it is realized why the freight rates were extremely high.

The hatred of the junkmen for the steamer companies thus engendered is mainly responsible for the reign of piracy in the Yangtze region, and no opportunity is lost by the junkmen to bedevil the companies, set fire to the steamers, intimidate the pilots, boycott the exporters, kidnap the passengers and finally, for the renegade snipers stationed on the banks, to pick off the pilot, thereby wrecking the ship.

Again and again the Yankee tars, comprising the crews of the seven gunboats which patrol the Yangtze for Uncle Sam, are called upon to engage in hand-to-hand combat with the ferocious river pirates. A striking instance of this sort took place some months ago when the gunboat Palos, assisted by the British gunboat, Aphis and the Yankee gunboat, Guam, was responsible for saving an entire town, with industries and property valued at over $2,000,000, from what otherwise would have been certain destruction.

The trouble started early one month when the Guam, cruising past Yochow, some 130 miles above Hankow, along the Yangtze at the junction of the Yangtze and Siang Rivers, was suddenly fired upon by bandits from the shore.

Later that same month the bandits, thought to be communists, captured the city of Changsha. It so happened that the Palos was cruising nearby, besides the British gunboat, Aphis, and the Italian gunboat, Eermanno Carlotto.

These vessels evacuated all the foreigners living in the town and then the Palos moved down the river just below the town to get out of firing range. A couple of days later, the Palos, on an inspection tour, cruised past the town. Then the fun began. An indeterminable number of pirates opened fire on them, finally being put to utter rout, fleeing, no doubt, deep into the hinterland. At any rate, the prompt action and vigilance of the Palos saved the city.