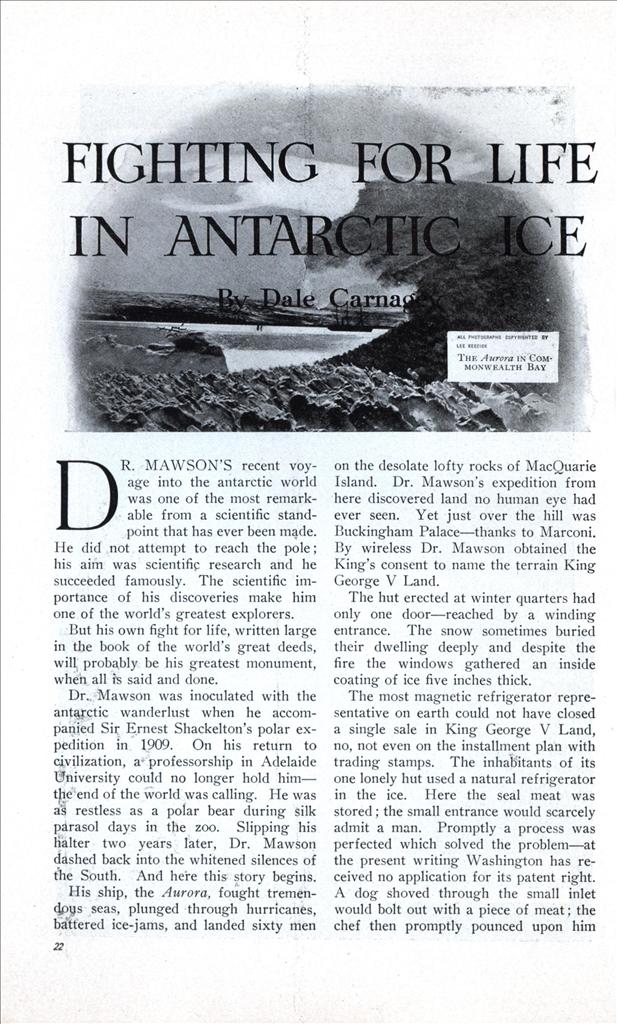 FIGHTING FOR LIFE IN ANTARCTIC ICE

R. MAWSON’S recent voyage into the antarctic world was one of the most remarkable from a scientific standpoint that has ever been made. He did not attempt to reach the pole; his aim was scientific research and he succeeded famously. The scientific importance of his discoveries make him one of the world’s greatest explorers.

But his own fight for life, written large in the book of the world’s great deeds, will, probably be his greatest monument, when all is said and clone.

Dr. Mawson was inoculated with the antarctic wanderlust when he accompanied Sir Ernest Shackelton’s polar expedition in 1909. On his return to civilization, a professorship in Adelaide University could no longer hold him— the end of the world was calling. He was as restless as a polar bear during silk parasol days in the zoo. Slipping his Halter two years later, Dr. Mawson dashed back into the whitened silences of the South. And here this story begins.

His ship, the Aurora, fought tremendous seas, plunged through hurricanes, battered ice-jams, and landed sixty men on the desolate lofty rocks of MacQuarie Island. Dr. Mawson’s expedition from here discovered land no human eye had ever seen. Yet just over the hill was Buckingham Palace—thanks to Marconi. By wireless Dr. Mawson obtained the King’s consent to name the terrain King George V Land.

The hut erected at winter quarters had only one door—reached by a winding entrance. The snow sometimes buried their dwelling deeply and despite the fire the windows gathered an inside coating of ice five inches thick.

The most magnetic refrigerator representative on earth could not have closed a single sale in King George V Land, no, not even on the installment plan with trading stamps. The inhabitants of its one lonely hut used a natural refrigerator in the ice. Here the seal meat was stored; the small entrance would scarcely admit a man. Promptly a process was perfected which solved the problem—at the present writing Washington has received no application for its patent right. A clog shoved through the small inlet would bolt out with a piece of meat; the chef then promptly pounced upon him trackless, wind-swept miles, stretched between them and the camp.

Mertz and Dr. Mawson after waiting nine hours at the crevasse, started back to headquarters, racing with death. Hunger gnawed at their vitals and the specter of starvation lashed their minds. None of the small store of provisions could be spared for the dogs; they trudged faithfully at the sledge until starvation cut them down. The last one died upon New Year’s Eve. While Broadway dined, wined, and noised the old year out the two explorers hunched over a little blue flame in a howling blizzard, and ate the last of Dr. Maw-son’s favorite dog— Ginger.

“The poor chaps,” remarked Sir Douglas, “dying of starvation, there was not much left of them besides hide and bones. The bones we crushed to get the marrow.

“Most of the fuel too, had been lost with Ninnis’ sledge. We held the dog meat over a blaze and partly charred, partly fried it—fuel was so scarce we ate the meat very raw. The sinewy dog’s paws, half cooked were almost inedible. Later we found that the oil held out better than we had anticipated. So we boiled the dog meat; the paws cooked into a jellylike mass and were quite palatable.” A grewsome sort of meal, that—but it meant life to the starving men.

On January 3rd, 1913, Mertz, exhausted, frost bitten, and starving, could no longer proceed on foot. Dr. Mawson hauled him on his sledge. Mertz suf and jerked away his toothsome treasure. (In operating a refrigerator of this kind it is necessary to use a dog who would make his exit before dining.) The second winter all available reading matter had been carefully digested ; so the men started to wade through the encyclopedia and cook book. Soon afterwards that little group, isolated from civilization, could have shamed a college faculty with their versatile information. Had you inquired of them about the pottery production in Cirenca, the lemon lily of Siberia, the distinguishing characteristics of Telemetacarpalia deer, the population of Ypsilanti, or the recipe for chocolate blanc-mange, they could have told you before the wind, going at one hundred miles an hour, raced across the roof.

Lieut. Ninnis, Dr. Mertz, and Sir Douglas then went on an exploring trip. “Watch out for this crevasse,” Dr. Mawson, who was with the front sledge, shouted back to his companions. Thinking they had heard him he continued for some time. Looking back he missed his rear companion — Ninnis. Sir Douglas and Mertz hurried to the crevasse;—a few fragments of the sledge load and a dying dog on a shelf one hundred fifty feet down, below that darkness; presently the moans of the dog ceased and the freezing vault was silent again forever. The sledge which had gone down carried most of their provisions—only ten days’ supply of food remained. Three hundred eleven miles, fered acutely and grew delirious. Four days later he died from cold and hunger after being unconscious for twenty-four hours. Over his emaciated body the drifting snows erected a white tomb, and the Southland sealed it with perpetual ice.

“My first impulse after Mertz died”, said Dr. Mawson, “was to wrap myself in my sleeping bag, go to sleep and forget it all. I finally determined to take at least my diaries to Aurora peak, about one hundred miles distant from the camp—there was a chance my records would be found there by a relief expedition and that was worth fighting for.”

His numbness of spirit, his dull unshakable determination to place those records in an accessible spot, probably saved his life. Worry about himself would have sapped the energy that carried him through.

As it was, he first lightened his load to accelerate travel. For one measure he cooked the dog meat he had left, to save carrying kerosene. He sawed in two his sledge—breaking his only saw in the operation. The food and diaries he placed on his sledge and from his dead companion’s clothes he fashioned a sail. A speedy assistant it proved in a land of ice where the average annual velocity of the wind is fifty miles per hour.

Alone Dr. Mawson started for Aurora peak. Frost bites and continual exposure had rendered his body almost raw. His clothing rubbed off the skin; his feet bled as he walked. Directions were partly guesswork; proximity to the magnetic pole made the compass useless. The best guide was the sun, but it was usually obscured by the clawing blizzards, so he was compelled to rely for guidance largely on the sastrugi—wind hewn ridges in the ice. These sastrugi usually run north and south, but varying in localities they are not infallible guides. For the next five days the stinging snow gyrated incessantly and threw back Dr. Mawson’s range of vision to within a few feet of him. Even the outline of the sledge he was pulling was invisible. Forgetting for the moment his exhaustion, pain, and starvation, he plowed on through the storm, dreaming of the odor of cooking meat, a book of Kipling’s verses by the fireside.

Crash! Chug! The snow beneath his feet gave way. The rope about his waist tightened! He dangled in a crevasse! His sledge had caught on the edge of the crevasse and saved him. There he hung some minutes—too weak to make an effort at recovery. Finally he pulled himself hand over hand out of the hole. The exertion had overtaxed his endurance; when he planted his feet again on solid ice, his knees trembled—a swoon—a plunge headfirst—and again Dr. Mawson dangled in the same crevasse from which he had just rescued himself. “I thought this was the end for sure, that time,” recounted Sir Douglas. “But it wasn’t. I managed to get out again—how, I do not remember. The first thing I can recall was that I was lying face down in the snow—nearly buried in it, in fact.” He erected his little tent he had left, ate and tried to sleep. But sleep is not easily wooed after such perilous escapes. Two more crevasses the next day swallowed Sir Douglas, but rescue was easier, for his experience of the day previous had prompted him to make a rope ladder. This he tied from his waist to the sledge so that in the event of dropping into a crevasse, he could climb up the ladder to safety—provided the sledge stayed up.

Starvation had literally wrecked his body—his finger nails, toe nails, and hair dropped out. The prolonged physical drain and mental strain almost dethroned his reason. He crawled for miles—too weak to walk.

Finally when he had lost all but a two fingered clutch on life, a thrill, a transcendent thrill, shot through and revitalized the dying man. A discovery as precious as a New World to Columbus! Food! Food! Life! A cache of provisions left by a search party! It was like finding a life boat as the Titanic sank. Dr. Mawson erected his tent, nourished himself and rested—light hearted, buoyant rest. For weeks he had charged the wind-swept ice fields and now he vanquished starvation and death. Conquered, they no longer interested him; his thoughts turned again to silk pajamas, charlotte russes, and Australia. Dr. Mawson was unable for some time to locate the hut even after he reached the coast line. The hut squatted down in the snow among the breaks in the shore, like a quail in prairie grass, so it was securely hid until he was right upon it.

Reaching camp he saw the Aurora disappearing over the horizon. Six men had been left to await the return of his party. After a few days the Aurora returned and they expected to start immediately for civilization; but the hurricanes swept down and prevented the ship from landing. The little group were left in camp for another year. When the ship finally returned it was as welcome as peace. “Eager were we,” said Dr. Mawson, “for some real fruits and hen’s eggs, though the seven of us, in the time we were in the camp, managed to account for some seven thousand penguin eggs.” Dr. Mawson did not say, but perhaps they had a dog bring the eggs, as well as the meat, out of their refrigerator.