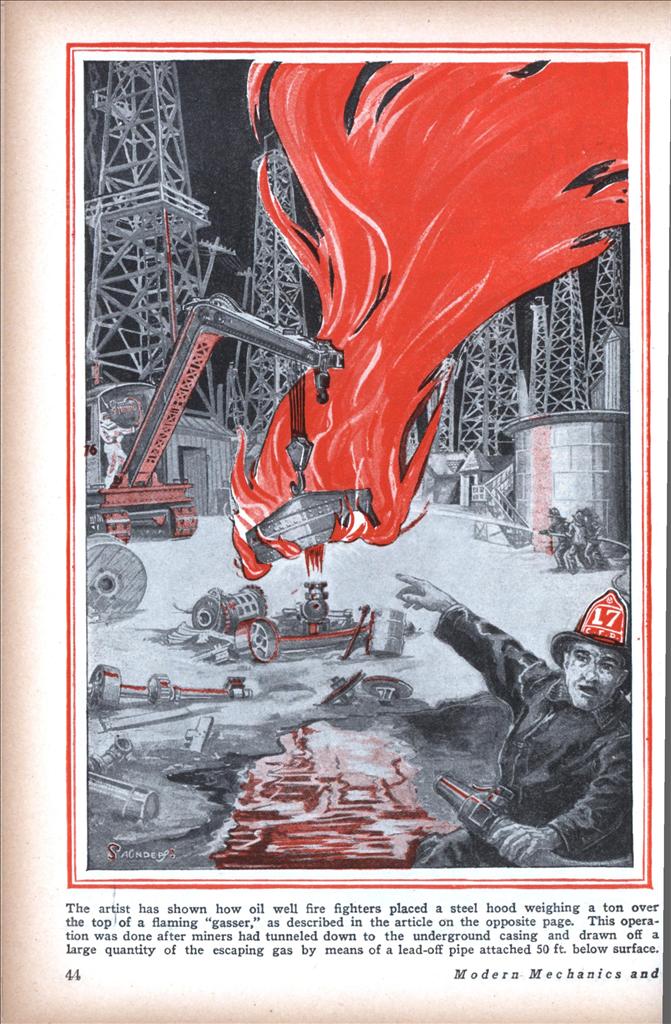 WHEN nature goes on a rampage and expresses her feelings in the form of a gas or oil blowout in the oil fields, the fire which frequently accompanies the upheaval would tax the resources of a metropolitan fire department. In fact, the fire fighters of New York City would probably be helpless under such circumstances, because they are accustomed to using water, while oil field firemen rely largely upon mechanical resources.

Within the last few weeks Southern California has experienced two fires, one of which was not subdued for 42 days. Both fires resulted from gas blowouts while wells were being drilled to the 6,000-foot zone at Santa Fe Springs. The first fire, occurring at the Getty No. 17 well, involved oil and gas, while the Bell View No. 2 fire involved more gas than oil.

No two oil well fires are alike, for the reason that the blowouts result from many different causes, and so no two gassers can be combated by the same tactics. Out in the wide open spaces, where derricks are far apart, the field men may use dynamite to snuff out a gasser. They attach the explosive in the center of a long cable, and with crews at either end they carry the string, high over their heads, to a point where the explosive dangles right over the casing of the well. The heat touches off the dynamite, and the sudden puff downward blows out the fire.

In the case of the Getty fire the operating companies, after a lengthy conference, decided against using dynamite. The tunnel plan used in this instance will, with modifications to meet existing conditions, probably serve the oil industry for a long time as a basis for handling such fires.

At a distance of about 350 feet from the gasser, a tunnel was started on an incline calculated to give it a depth of 50 feet at the casing. The miners worked with power shovels, and the dirt was rolled out on small cars. Good progress was made with a hole four feet wide and six feet high until the miners got within forty feet of the casing, where they hit quicksand, which caused caving and compelled them to build concrete walls.

When the casing was reached a large concrete room was built around it, so the machinists could work on all sides. The oil well had 15-1/2-inch surface casing with 11-inch casing inside that, 9-inch inside the 11-inch, and a 4-inch drill pipe inside the 9 inch casing. Drilling through the outer casing, the miners took acetylene torches and cut off the outer casing from the ceiling to the floor.

Drilling through the 11-inch, they used bolts to crowd it over to center, and then pumped in cement until they had filled up the space between the 11-inch and 9-inch. Then they stripped off a section of 11-inch, and put on clamps at cellar and floor. These clamps were made in two pieces, which bolted right around the casing. In the center of each clamp, on one side, was a threaded hole, into which pipe could be screwed. They connected pipe to these outlets to take off such oil and gas as was coming up between the two strings of casing.

This oil and gas was sucked out of the casing, through tap lines, by a vacuum pump calculated to pump it faster than it could go up to the mouth of the well. This oil and gas went out into a scrubber which separated them and stored the oil. The vacuum pumps took off so much fuel from the fire that the blaze, which had been 200 feet; high, was greatly reduced. This enabled engineers, using a steam crane, to approach the well and set over the mouth of the casing an enormous hood, weighing more than a ton.

This hood smothered the flames and caused the gas and oil to flow more freely through the lines running from the casing in the tunnel to the scrubbers and tanks. Workmen then approached the hood and dug a trench to lead off the small amount of oil that was bubbling up into the hood. After a time the well quieted down so that the workmen could lift off the hood and screw a Christmas-tree valve upon the top of the casing and shut down the valve, confining the well’s oil and gas flow entirely to the tunnel lines. It has been roughly estimated that the mechanical work on this job cost $250,000.

Many straight gassers can and are sub- dued by live steam, or heavy cement mixtures, but where the pressure is too great the cement is hurled out and the steam fails. Such a gas well may, at any time, hurl out a rock that will strike a spark when it hits against the side of the casing at its mouth, and this will start a fire that may do millions of dollars in damage.

In another instance a gas fire was successfully combated by a similar tunneling operation in which mud and live steam was injected into the casings, cutting down the flow of gas and making it possible to drop a huge steel ball into the fiery maw of the well. The sphere was injected with a mixture of mud and hematite, a granulated and crystallized type of metal. More mud was then pumped in at the top of the well, effectively smothering the flames after damage of $1,500,000 had been done.

When a fire “gets going” in a big oil field, the operators usually shut down operations and pool their resources until the flames are conquered. Fire is likely to spread to adjoining oil-soaked derricks unless immediate steps are taken. Even gas wells are likely to prove dangerous to the community if fogs blanket the gas close to the earth before the flow can be controlled with valves. A big “gasser” could asphyxiate a whole town.