When the cats takeover, remember, this is where it started.

I, for one, welcome our new feline overlords. 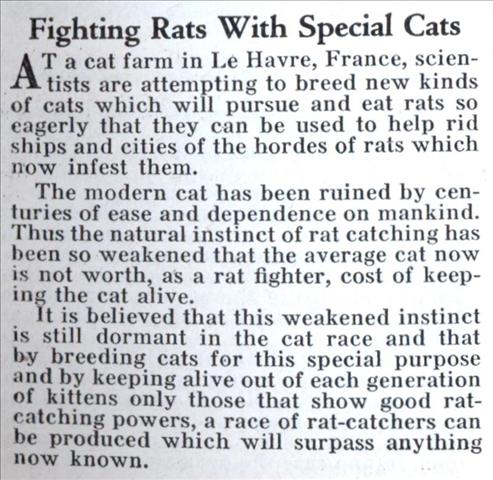 AT a cat farm in Le Havre, France, scientists are attempting to breed new kinds of cats which will pursue and eat rats so eagerly that they can be used to help rid ships and cities of the hordes of rats which now infest them.

The modern cat has been ruined by centuries of ease and dependence on mankind. Thus the natural instinct of rat catching has been so weakened that the average cat now is not worth, as a rat fighter, cost of keeping the cat alive.

It is believed that this weakened instinct is still dormant in the cat race and that by breeding cats for this special purpose and by keeping alive out of each generation of kittens only those that show good rat-catching powers, a race of rat-catchers can be produced which will surpass anything now known.