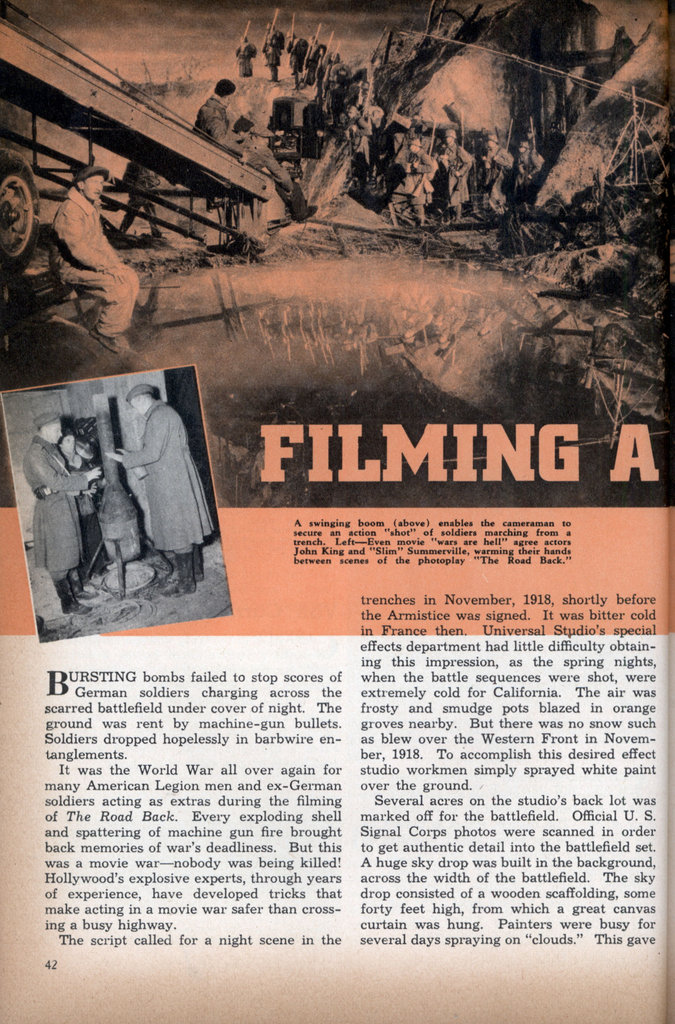 The script called for a night scene in the trenches in November, 1918, shortly before the Armistice was signed. It was bitter cold in France then. Universal Studio’s special

effects department had little difficulty obtaining this impression, as the spring nights, when the battle sequences were shot, were extremely cold for California. The air was frosty and smudge pots blazed in orange groves nearby. But there was no snow such as blew over the Western Front in November, 1918. To accomplish this desired effect studio workmen simply sprayed white paint over the ground.

Several acres on the studio’s back lot was marked off for the battlefield. Official U. S. Signal Corps photos were scanned in order to get authentic detail into the battlefield set. A huge sky drop was built in the background, across the width of the battlefield. The sky drop consisted of a wooden scaffolding, some forty feet high, from which a great canvas curtain was hung. Painters were busy for several days spraying on “clouds.” This gave the effect that the war ground’s horizon was several miles away.

Twelve pieces of digging equipmentâ€”tractors, scrapers, and steam shovels, were required to dig trenches, grade the battlefield and to give it that shot-to-pieces appearance. Each day, after the night war episodes were shot, workmen would dig up the ground and sprinkle it with water to make the mire deep for the coming night. Realism of the first order.

Real war is costly. So is a movie war! Thousands of rounds of blank ammunition for the 8 mm Mauser rifles were fired. One thousand pounds of black powder, five hundred pounds of dynamite, and 2,000 detonating caps went up in smoke for the combat scenes. Four hundred parachute-flares and seven hundred night flares were consumed during night film warfare.

Over a hundred gallons of liquid smoke, the preparation, ingredients and manufacturing processes of which are a carefully guarded military secret, were employed in the battle scenes. Navy planes use this liquid smoke to hide ships during maneuvers.

Two “inventions” were worked out in the battle sequences. Ground oyster shells were found to give a better photographic reproduction of dust, in shell-explosions, than dust itself. And by balancing the charcoal content in black-powder bombs, greater photographic value was given to explosions.

Months of research must go into a war film before the cameras begin to roll. Hundreds of historic photos must be studied by the technical department. The wardrobe department must correctly tailor the exact type of uniform worn by a certain regiment at a certain time. The studio arsenal must be sure to supply the correct rifle model. More care must be taken for carefully depicting recent wars than those of a century ago, as many veterans are film fans.

Ralph Morgan, head of Universal’s special effects department, who has worked on many war films, including The Big Parade, tells how one of the war illusions is achieved:

“To get the effect of a shell striking the ground and exploding we first dig the shell hole. The shell crater is dug in hard earth. The earth on the sides of the hole is tightly packed. Next the explosives man plants his powder charge in the center of the crater in such a way that it will blow straight upward. Then into the shell hole is sifted a mixture of earth and cork until it is even with the rest of the terrain.

“A wire connects this prepared hole with the head explosive expert’s control board. These shell holes are often marked by an odd clod of dirt, an old gun carriage wheel or a fake stump. Sometimes the danger spot is dabbed with a bit of paint that will not show in the film. The players, who have previously been coached by the director and his assistants, will avoid passing directly over these shell explosives. A shower of soft earth and ground cork will be the only discomfort actors who pass near these shell hole explosions will suffer.”

When you see a performer being blown skyward by an explosion you can be certain it’s a dummy. The dummy is usually made from rubber. Often an actual life cast of the actor the dummy is supposed to represent is made from rubber. This type dummy is more realistic than those formerly used, which were stuffed with sawdust.

The effects of bullets striking are obtained by two different methods. The usual system is to fire away with the rifle or machine-gun at the top of an entrenchment or building while the camera is safely located at one side filming the hits. Special care must be taken that bullets do not ricochet. This stunt is used when actors are not in the scene.

To get the effect of bullets striking near players in trenches, tiny powder charges are embedded in the dust. These explosives have about the same power as toy torpedoes youngsters throw on the Fourth of July. In fact some explosives men have used torpedoes for this effect. A thin wire is attached to each charge and to a control board. As a man presses the control board buttons the small explosives go off, giving the effect of a bullet biting the dust. The action of machine-gun bullets striking can be had by firing a series of these minute explosives in a row, all within a few seconds.

A new trick was used in The Road Back to get the realization of a French bullet crashing a mirror in front of “Slim” Summerville, the comedian, as he shaves. A prop man, who was a clever marksman with a sling shot, shattered the mirror on the first shot.

To create the illusion of shrapnel bursting in the air, a paper bag is filled with black cardboard chips and flashlight powder and then catapulted into the air. A time fuse sets off the powder, explodes the sack and scatters the harmless cardboard scraps about so that it looks as if deadly steel shrapnel was pelting the actor-fighters.

Explosions for day and night warfare vary. For daylight hostilities bombs are usually made from black powder and bone charcoal so as to send great bunches of black smoke and dust mushrooming skyward. At night white smoke and dust serves the purpose better. Large spotlights are hidden in shell holes and trenches to enable them to cast a glow on explosions’ smoke.

When a building or tree is to be blown up before the camera it is usually weakened first or constructed in such way as to crack-up from a small charge of powder. Bricks and masonry are often made from papier-mache if players are to be in the danger zone when the building blows up.

Every explosive expert has his own tricks for making movie wars. There are about a dozen employed at this odd occupation in Hollywood. Each has a different system for laying out a war. Some use one control board to manage their explosives, while others have several assistants posted at different spots over the battlefield to handle various explosions. They are always to one side, out of the camera’s range. Cameras with telephoto lens are often used to film dangerous mine explosions from a distance.

James Whale, the director of The Road Back, was in touch with the actor-soldiers on the movie battlefield at all times by means of an elaborate loud speaker system. Megaphones, that directors once shouted through in the old days, have been replaced by the more audible electrically operated loud speaker systems.

Many of the more thrilling over the top attacks were taken without sound being recorded. The little sound mike would have had a busy time keeping up with the player-soldiers. And the sounds would not be as real as those created by the sound men and later “dubbed-in” the film. It might be well to mention the number of persons besides the actual actors and extras who helped to make the cinema war. One hundred and twenty-four property men, wardrobe men, wardrobe checkers, gunsmiths and assistant “powder monkeys” were required to keep track of the equipment used. A special prop and wardrobe room was constructed near the set, from which the cleaned uniforms, rifles, and the day’s supply of ammunition were issued to the fighters. Eighty-seven electricians were needed to operate several hundred big lamps required to illuminate the battlefield for night shooting.