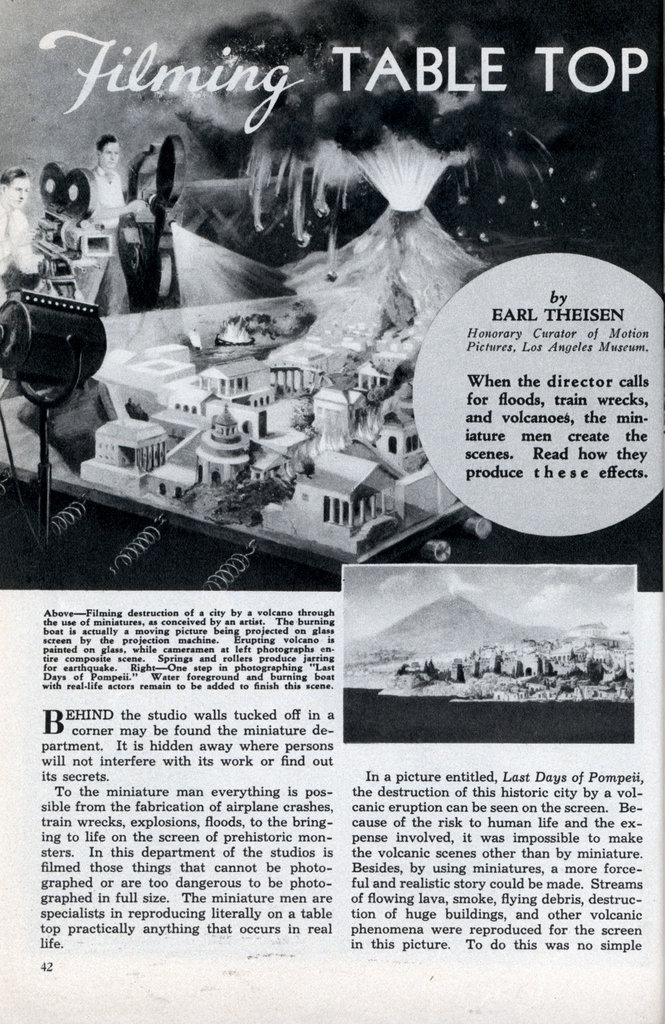 In a picture entitled, Last Days of Pompeii, the destruction of this historic city by a volcanic eruption can be seen on the screen. Because of the risk to human life and the expense involved, it was impossible to make the volcanic scenes other than by miniature. Besides, by using miniatures, a more forceful and realistic story could be made. Streams of flowing lava, smoke, flying debris, destruction of huge buildings, and other volcanic phenomena were reproduced for the screen in this picture. To do this was no simple matter; chemistry, physics, and much creative ingenuity contributed to the filming. Some scenes required as many as five trick super-imposures exposed on the same film.

One such scene depicted a boat burning in the harbor of Pompeii. In the background Mt. Vesuvius was shown erupting while the streets of Pompeii began to fill with smoke and ash. The burning boat with real-life players was photographed in full size and then later added to the miniature scene by what is known in the studios as the “projection process.” This process consists of projecting the movie of the burning boat to a screen placed in the miniature setting. The screen being of glass is easily camouflaged in the setting. By moving the projector, which was out of camera lines near the screen, a proper balance between the size of the boat and the miniature city was reached.

To photograph this entire scene it was necessary to run the negative through the camera five times, each time a different portion of the picture was photographed.

First the city of Pompeii was photographed showing the streets beginning to fill with smoke and ash. The negative was then re1 wound in the camera and a second exposure was made showing Mt. Vesuvius; then another exposure introduced the smoke and fire effects which were being ejected from the mouth of the volcano; finally the burning boat was added. A fifth exposure introduced birds flying about in the scene.

The various exposures were required because different methods or “processes” had to be used for the various effects. The smoke and fire effects had to be photographed at high speed in order to get the proper floating and billowy effect. Then the clouds were superimposed over the city by “stop-motion,” which is the studio name for the process of photographing action photograph by photograph rather than continuously as is done when “shooting” real life stars. In “stop-motion” the action is photographed pose by pose on motion picture film. When the progressive poses are projected in the theatre at high speed, the poses blend together to give the illusion of motion.

In the destruction of Pompeii, the use of “stop-motion” made it possible to project the picture of the clouds and falling ashes into the city while the city was being destroyed.

This was done by projecting the motion picture of the clouds, which was taken at high speed on to a “split screen.” The “split screen” which was placed a few inches in front of the camera lens in this “shot” is a partially silvered mirror which reflected the image of the clouds and at the same time permitted the camera lens to see through the mirror to photograph the miniature city. In this way the two pictures were combined.

In the fabrication of the destruction of a building by earthquake in The Last Days of Pompeii, Willis O’Brien, who did the technical and miniature work on The Lost World, King Kong, as well as this picture, constructed a miniature building of about four by five feet in size on a table. In order to effect an earthquake movement, the table was set on a series of rocker arms operated by an electric motor. The building was constructed of plaster and wood joined together in sections, and was so built that any desired portion could be made to collapse when desired by pulling wires which ran through the building down to the table, and from there to the control board.

In some sea films that show boat wrecks or fires, the work is done by use of miniature. In some instances the boat never touches the water but is run on tracks in the studio sound stage. Recently Ralph Hammeras, who is in charge of miniature photography at Fox Films Corporation, constructed a twelve-foot miniature boat in order to show a fire at sea.

The boat was complete with every detail of an ocean going liner, even to the use of three thousand miniature globes that actually furnished illumination.

The water was added by the “projection process,” which projected a moving picture of the desired ocean scene to a screen behind the ship. The camera angle was set so the projected picture of the ocean and the burning ship was combined to show the ship moving in water. In so doing a more forceful and effective action for the story was obtained with no risk to human life.

Things as complicated as a ballroom with dancing couples have been made in miniature. For the Big Broadcast, Harry Reynolds, who makes the miniatures for Paramount Studios, brought to life such a ballroom where sixty couples danced the waltz, and an orchestra of men made in miniature to represent the Vincent Lopez Orchestra went through all the motions of producing the music.

To make these miniatures do this was not a simple matter. Harry Reynolds constructed a number of conveyor belts on which were anchored the figures. These conveyor belts ran over drums, which had an intricate tripping mechanism which moved the figures in a certain manner when in a desired position.

The question arises, “Why go to all that trouble when the real orchestra and ballroom would be available?” At times it is thought desirable for picture purposes to photograph at an impossible angle, or photograph in a dangerous position.

Probably the most difficult of all miniature shots are the type that characterize Willis O’Brien’s work; that is, in such pictures as King Kong, wherein people in small size are added to miniatures which seem of heroic proportions.

The new “stop-motion” camera is used in photographing miniatures so they may be moved by hand between each exposure while the camera shutter is closed. The process of photographing a miniature by “stop-motion” pose by pose is continued until the desired action is complete. A day’s work is often only twenty-five feet of film, which is seen on the screen in about a quarter of a minute. To add real-life persons to the miniature picture, a real-life motion picture is first taken of the persons going through the desired action. Then, the miniature set is made up in which is added a projector screen of a lightly ground glass. This glass blends with the rest of the set in such a way that its presence is not noticed. Now, while the miniature fur-and-steel ape is being moved from position to position in the set around the projection screen, a moving picture of the people is projected one picture at a time.