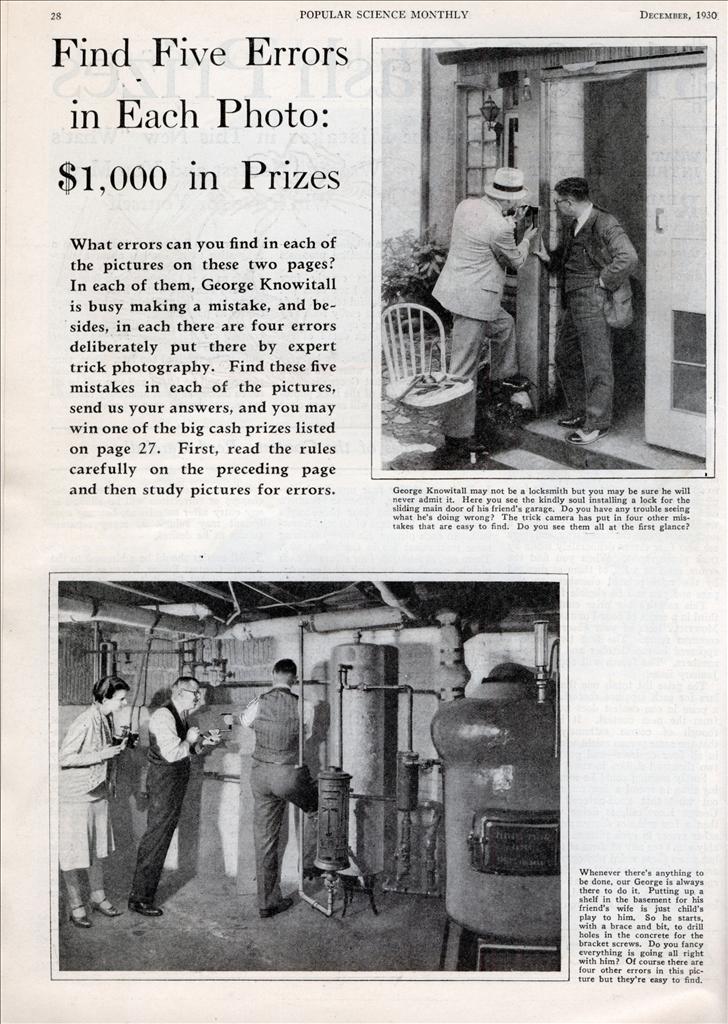 What errors can you find in each of the pictures on these two pages? In each of them, George Knowitall is busy making a mistake, and besides, in each there are four errors deliberately put there by expert trick photography. Find these five mistakes in each of the pictures, send us your answers, and you may win one of the big cash prizes listed on page 27. First, read the rules carefully on the preceding page and then study pictures for errors.

George Knowitall may not be a locksmith but you may be sure he will never admit it. Here you see the kindly soul installing a lock for the sliding main door of his friend’s garage. Do you have any trouble seeing what he’s doing wrong? The trick camera has put in four other mistakes that are easy to find. Do you see them all at the first glance?

Whenever there’s anything to be done, our George is always there to do it. Putting up a shelf in the basement for his friend’s wife is just child’s play to him. So he starts, with a brace and bit, to drill holes in the concrete for the bracket screws. Do you fancy everything is going all right with him? Of course there are four other errors in this picture but they’re easy to find.

Doubtless George Knowitall is a great driver, but the one specialty about which he has done a great deal of bragging is his ability to park in a limited space on a busy street. In the picture above he is demonstrating this self-acclaimed knowledge and skill. Will he, do you think, get the car parked in time to go home? Don’t spend all your time on George, as there are four other errors in this picture that were put there deliberately by trick photography. That makes five in all for you to find. Each of them is perfectly plain and easy to see—if you use your wits and your eyes.

Wise old George doesn’t exactly pose as a great chef but he does claim to know all there is to know about a gas range. So when a gas line was clogged in this stove, he volunteered to fix it in a jiffy. He got the gas flowing and lighted it with the result you see. Maybe you’ll find he made a mistake. Don’t forget to find the other four errors that slipped into this photo.

You Still Have Time to Share This $1,000 Just to give you every possible chance in our big “What’s Wrong?” contest, we are here reproducing, in a smaller size, the photos that appeared last month. The November issue, in which these pictures ran full size, can be seen in public libraries or at any office of this magazine. Read the rules, find the errors in these pictures, and send in your list before November 30.

George never ran a garage but surely he can put spokes in the wheel of his friend’s Ford. You can see him here, with repair wire in his hand, busily engaged in getting the broken spokes out. Is he doing anything wrong? Also there are four other mistakes for you to find.

Genial George always likes to please the ladies and so he was eager to put hooks in the china closet to hang the cups on. After all, will the lady be pleased, do you think, when the job is finished? Four other errors have been photographed into this picture for you to find.

When his friend’s doorbell wouldn’t ring, Knowitall was delighted because that gave him a chance to do something for his friend. At once he set out to put the thing in shape. First he threw away the dead batteries and showed his friend how to hook the bell to the light circuit. Here he is connecting the wires. Will everything be all right? What are the other four mistakes?

At left, the best program of the evening has been suddenly interrupted by a burned out tube and our old friend George has rushed to the rescue. His friends believed him when he said he was a radio expert and expect to hear music any minute. George, however, has spent a lot of time trying to put another tube in the set. Do you think he’s likely to succeed? Don’t forget, there are four other errors in this picture for you to discover.

Find the Mistakes in This New “What’s Wrong?” Contest and You May Win Prize for Yourself.

WHAT YOU MAY WIN IN THIS NEW CONTEST.

READ the rules carefully, find all the errors, and then send in your list. You may win one of these sixty-three cash prizes:

HERE’S another chance for you to win a big cash prize! Five hundred dollars for first! Sixty-three cash prizes in all totaling one thousand dollars! All you need do is to spend a few minutes studying the four pictures on the following two pages. In each of them George Knowitall. the world’s champion dumbbell, is doing a mechanical job in the wrong way, and there are also four errors deliberately made by trick photography. When you find the errors, send us a list of them as directed by the rules printed elsewhere on this page and you will be eligible for a prize.

This month’s big prize contest is the third in a series of four Popular Science Monthly tests of your observation and common sense. The first two contests appeared in the October and November numbers. The fourth will appear in the January issue.

The prize list totals one thousand dollars for each separate contest. Winning a prize in one contest does not bar you from the next contest. It is possible, though of course extremely unlikely, that the same person might win first prize in all four contests—and get a total of two thousand dollars in cash!

Surely nothing could be more interesting than to spend a few minutes finding out what that good-natured blunderer. George Knowitall, is doing wrong and then a few minutes discovering the four other errors in each picture. You probably won’t see any of them at first glance, but when these weird photographic errors are once found, you will wonder how you could have overlooked them!

Knowitall is pretty stupid. No expert knowledge is needed to figure out what he is doing wrong. Just a nodding acquaintance with familiar mechanical processes is all that is required.

Each picture contains exactly four photographic errors that have been put there deliberately by skillful trick photography. These errors are easily found by a careful check-up of the appearance and apparent position of each detail of the picture.

In writing out your answers be very careful to write exactly what you mean. When you discover what George is doing wrong or you find one of the trick photographic errors, the error will seem so clear in your own mind that there will be a temptation to be careless about answering. Remember that the judges can only decide as to whether you have found the errors by what you write. Describe what’s wrong in the picture just as briefly and clearly as possible.

First carefully read the rules of the contest on this page. Pay particular attention to the closing date so your entry will not be received too late. Then, turn to the next two pages where the contest pictures will be found and you will be all set to tackle the most amazingly fascinating picture contest ever conceived!

Rules of the Contest—Read Carefully.

3. Answers to each monthly contest must be mailed or delivered to the offices of Popular Science Monthly not later than the thirtieth of the month following the date of publication of the magazine in which the pictures appear. Thus, to assure consideration in this month’s contest,answers to the pictures in this month’s issue, published November 3, must be mailed or delivered not later than December 30. No entry bearing a postmarked date later than the closing date for entry will be considered.

4. Answers may be submitted on any kind of paper, but they must be typewritten or written in ink, and on one side of the paper only. Each error must be listed separately and numbered. No changes or corrections will be allowed in any entry after submission, but any contestant may submit as many separate entries as he desires.

5. All entries should be addressed to the Picture Contest Editor, Popular Science Monthly, 381 Fourth Avenue, New York City. Name and address of the entrant must be written plainly on each page of the entry. Entries with insufficient postage will not be accepted. The publishers cannot be responsible for delay, loss, or nondelivery of entries. No contribution entered in this contest will be acknowledged and none will be returned. No letters of inquiry regarding points covered in the rules can be answered.

The officials of the Popular Science Institute will act as judges and their decision will be final. The judges will work as expeditiously as possible in arriving at their decision, and the names of the winners will be announced in an early issue of the magazine.

Another Contest Next Month-Watch for It!