Popular Mechanics
Issue: May, 1924
Posted in: Communications
2 Comments on FIRE-ALARM CALLS SENT OUT WITH PERFORATED PLATES (May, 1924)

FIRE-ALARM CALLS SENT OUT WITH PERFORATED PLATES (May, 1924) 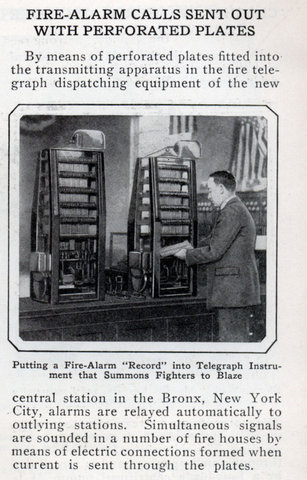 By means of perforated plates fitted into the transmitting apparatus in the fire telegraph dispatching equipment of the new central station in the Bronx, New York City, alarms are relayed automatically to outlying stations. Simultaneous signals are sounded in a number of fire houses by means of electric connections formed when current is sent through the plates.