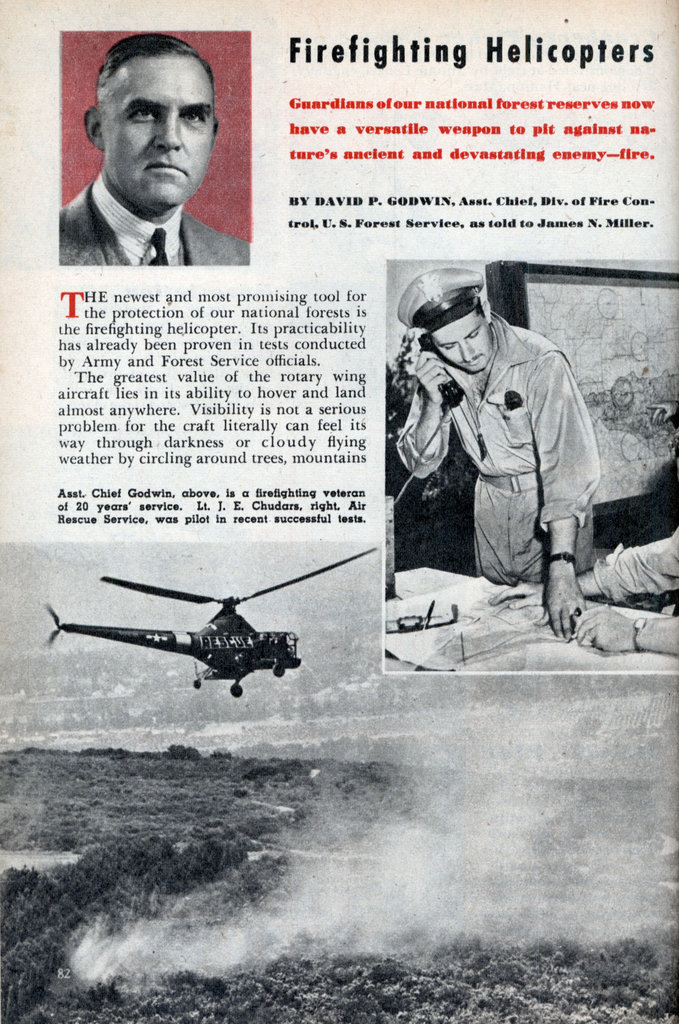 Guardians of our national forest reserves now have a versatile weapon to pit against nature’s ancient and devastating enemy—fire.

THE newest and most promising tool tor the protection of our national forests is the firefighting helicopter. Its practicability has already been proven in tests conducted by Army and Forest Service officials.

The greatest value of the rotary wing aircraft lies in its ability to hover and land almost anywhere. Visibility is not a serious problem for the craft literally can feel its way through darkness or cloudy flying weather by circling around trees, mountains and other obstacles. In these respects it is superior to the airplane which has been used by the Forest Service for some 25 years.

Heading up the helicopter-forest project is Colonel Wallace S. Ford, commanding the Air Rescue Service, AAF. I serve in a like capacity for the Forest Service with headquarters in Washington. In charge of the actual experiments are Major Fred W. Milam, AAF, headquartered at March Field, Calif. His able associate is Clare Funk, Forest Service equipment engineer for the California region.

After reviewing the results of our program, covering a period of about five months, we feel that the helicopter is about the most versatile type of flying machine for our work. It is capable not only of vertical rise and descent within an area slightly larger than that swept by its rotors, but also of hovering, climbing, gliding and flying backward, forward or sideways.

The Forest Service is not planning to maintain what might be called a helicopter “patrol.” The role of this type of flying machine in fire control work, as compared with that of the airplane, is about the same as that of the city fire engine as contrasted to the fire patrol car. It’s most likely to become largely a standby proposition, with the helicopter always on tap as a “hot shot” unit, ready for quickest possible use for transporting men and firefighting equipment to remote sections of our national forests otherwise inaccessible by air, water, trail or road.

For several years Forest Service officials have conferred with manufacturers of rotary wing aircraft concerning their fire problems. At the moment it seems most likely that the Army’s R-5, a Sikorsky model, such as we used in our tests, will be the first to actually go into forest protection work. The R-5, with 450 hp, is the prototype upon which the first Sikorsky commercial model, the S-51, is based. The latter has a cruising speed of 80 mph, a service ceiling of 13,000, a cruising range of over 200 miles and its fuel consumption is roughly 28 gallons per hour. It carries a fuel weight of around 500 pounds and has accommodations for a pilot, three passengers and a baggage weight of 70 pounds.

At present there are comparatively few competent helicopter pilots and mechanics. I would guess that there are probably not 200 pilots who have checked out on the helicopter. However, 30 hours of training is sufficient to make a helicopter pilot out of a good airplane pilot, so we don’t expect this to be a problem in the future.

Because it can land and take off in . very restricted areas, the helicopter could deliver men and supplies in thousands of spots through forested areas, such as flat ridge tops, small meadows or clearings, and in canyon bottoms.

Among the areas now under consid- eration for maintaining helicopters are the Northern Rockies, which take in sections of Montana and Idaho; the Northern Cascades, running through Oregon and Washington, and the Sierra Nevada range that hooks into the Cascades, running southward through California. Other possible regions are the Central Rockies in Colorado and the mountainous areas of New Mexico and Colorado.

Early in our research program, Forest Service officials realized that for their type of work greater lift and better all round performance were a “must.” Sikorsky answered our prayer and equipped some of the experimental R-5’s with a newly designed type of rotor blade, offering much improved lift characteristics—so much so that at 7,000 feet with the new blades we were able to achieve about the same performance that we got with the old type at heights of only 4,000 feet.

As a rough performance specification you might say that the Service is now seeking a helicopter that will behave as well at 8,000 feet as present ones do at 1,000 feet in take off, hovering, landing and cargo hauling. We are confident the industry will be able to develop this type of super-craft in the reasonably near future.

We most certainly expect radical changes in the shape of tomorrow’s helicopters. Already on the drawing boards are cabins almost exactly like those found on regular cargo and transport airplanes. We in the Forest Service are thoroughly in accord with this idea. For we need as much open space as possible for men and cargo. A little later on there seems to be no engineering reason why the industry cannot produce a helicopter with a payload of 2,000 to 3,000 pounds. Which would mean that we could transport ten “smoke-chasers” with complete equipment for each man.

Tomorrow’s firefighting helicopter no doubt will go much faster than today’s. However, speed is not the main thing we’re seeking. A speed of 100 mph. is just about adequate for our purposes.

Many other potential forest uses loom for the helicopter. On large fires men could be shuttled back and forth between fire camp and fire line, and prepared food taken to smoke-chasers on the job. For various types of observation, the helicopter would be ideal. These include detection of fires, scouting big areas already burning and prevention and law enforcement in sections where incendiarism is suspected.

Millions of dollars have been invested in roads and trails constructed primarily for fire protection. A well planned and skilfully managed helicopter operation could provide a degree of protection justifying reduced road-building and abandonment of some existing roads.