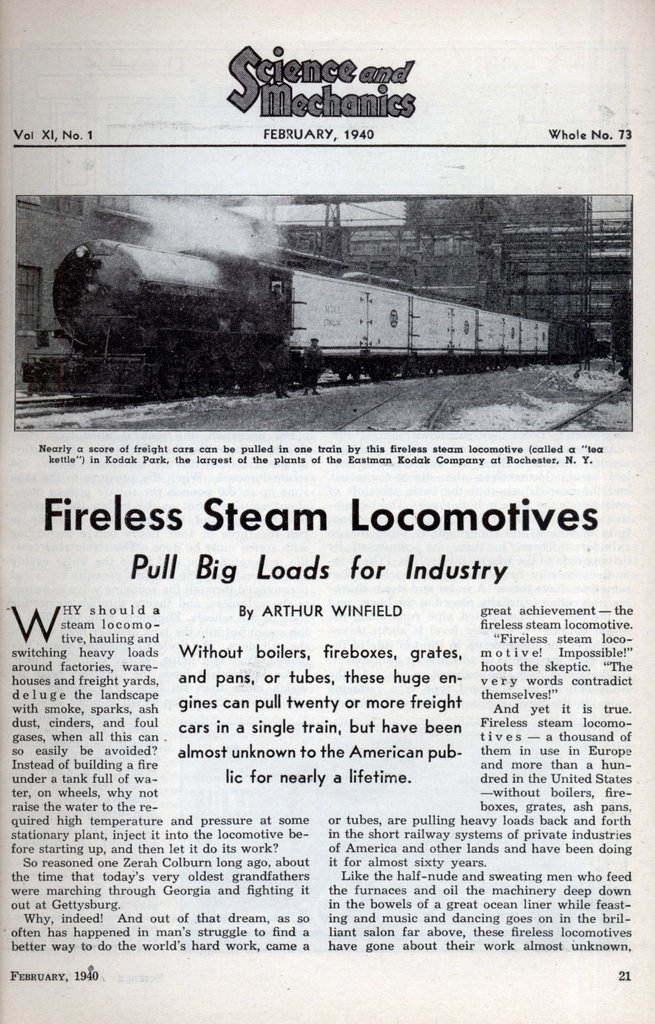 Without boilers, fireboxes, grates, and pans, or tubes, these huge engines can pull twenty or more freight cars in a single train, but have been almost unknown to the American public for nearly a lifetime.

WHY should a steam locomotive, hauling and switching heavy loads around factories, warehouses and freight yards, deluge the landscape with smoke, sparks, ash dust, cinders, and foul gases, when all this can so easily be avoided? Instead of building a fire under a tank full of water, on wheels, why not raise the water to the required high temperature and pressure at some stationary plant, inject it into the locomotive before starting up, and then let it do its work?

So reasoned one Zerah Colburn long ago, about the time that today’s very oldest grandfathers were marching through Georgia and fighting it out at Gettysburg.

Why, indeed! And out of that dream, as so often has happened in man’s struggle to find a better way to do the world’s hard work, came a great achievement — the fireless steam locomotive.

And yet it is true. Fireless steam locomotives — a thousand of them in use in Europe and more than a hundred in the United States —without boilers, fireboxes, grates, ash pans, or tubes, are pulling heavy loads back and forth in the short railway systems of private industries of America and other lands and have been doing it for almost sixty years.

Like the half-nude and sweating men who feed the furnaces and oil the machinery deep down in the bowels of a great ocean liner while feasting and music and dancing goes on in the brilliant salon far above, these fireless locomotives have gone about their work almost unknown, unseen, unsung, for nearly a lifetime.

What makes the wheels go ’round? How do they work? Don’t they run down?

Answers to these and many other questions are not difficult. There are two types of fire-less steam locomotives—the direct-connected, and the gear-driven—but the basic principle of operation is the same in both types. The locomotive consists chiefly of a large tank or reservoir, fully insulated, and connected by pipes to two cylinders. These, in turn, are connected by driving rods to the wheels themselves. The locomotives usually have two pairs of wheels, but sometimes have three. A water and steam charging connection is usually placed at the lower rear of the tank. A perforated pipe runs along the inside bottom. The water level is about three-fourths of the distance up to the top side of the tank, over the middle of which is an atmospheric condenser to take the exhaust steam. At the front end of the standard type is a reducing valve in the pipes connecting the tank and the cylinders. A throttle is the primary method of control.

For operation, the tank is filled from two-thirds to three-fourths with water. Connection is then made with the stationary boiler, and steam injected. When the pressure in the tank runs up to 200 pounds per square inch or more, about equal to that in the boiler, the coupling disconnected, and the locomotive is ready to run for three or four hours before recharging with steam must be done. The steam rises from the perforated pipe and heats the water evenly and thoroughly. The working pressure generated is conveyed through the reducing valve and pipes to the cylinders, and thence through connecting rods to the wheels. Engineers state that 95% of the steam put into the tank actually does work in the cylinders. The fireless locomotive cannot explode. That fact helps “safety first,” of course.

For lightweight loads the “fireless” need not weigh more than six tons. For heavier work other locomotives often weigh as much as eighty tons. Leading manufacturers of these locomotives in the United States are: Baldwin Locomotive Works, Vulcan Iron Works, and Heisler Locomotive Works. The gear-driven type is made by the H. K. Porter Company, of Philadelphia.

The largest fireless locomotive ever built is now nearing completion in the Erie, Pa., plant of the Heisler Locomotive Works. It will have 30% greater capacity than any existing similar locomotive and will be streamlined, according to an announcement by the makers. It is eighty-five feet long, weighs eighty-four tons, and has eight wheels. It will be charged with a pressure of 300 pounds per square inch and will work eight hours before needing recharging.

Low-Cost Operation Maintenance and operating costs are low on the fireless locomotive. Its simplicity of construction does away with the many and intricate parts which are found in the fired locomotive and which require so much time for inspection and adjustment. In the case of the fireless locomotive, inspection requires it to be out of service only 1% of the time as against 6% for the fired type. It is the cheapest in upkeep of all types of industrial haulage equipment. One man can operate it, and he can do other work when the engine is idle. The “fireless” is credited with paying for itself in two years. Maintenance costs less than 1% of the purchase price.

Economy, cleanliness, convenience and lack of fire hazard make the fireless locomotive ideal for use in lumber mills, furniture factories, woodworking plants, cotton and textile mills, powder mills, and many other places where fire and sparks are dangerous.

An excellent illustration of its use, at Kodak Park, the largest of the plants of the Eastman Kodak Company at Rochester, N. Y., has been given by R. P. Johnson in a publication of the Baldwin Locomotive Works. Three “teakettles” are in use at Kodak Park, which is a plant of more than 90 buildings situated in an area of more than 400 acres. Of one of these storage- steam locomotives Mr. Johnson says: “This fireless engine built in 1920 and weighing 148,400 pounds, has a tractive force of 25,-650 pounds, a reservoir pressure of 200 pounds per square inch (the charging pressure), and a working pressure, available through a reducing valve, of 60 pounds per square inch.

“Conditions at the plant of the Eastman Kodak Company are unique in that they require absolute cleanliness and freedom from dust, smoke and soot in all departments. The amount of effort expended in excluding the minute particles of dust from every manufacturing process that might in any way endanger the purity of the finished product seems almost quixotic. Its nine miles of paved streets are flushed many times a day.

What Load Can It Pull?

“That no particle of soot or offending fumes may descend within the park enclosure, the power house chimneys are built to a height of 366 feet. Here no other type of engine could as efficiently and economically meet the exigencies of these conditions. Electric motive power, while clean, is expensive. The fireless takes about twenty minutes to charge at the power house, then proceeds to pull its load of from seven to twelve freight cars over their 8-1/2 miles of standard gauge track around curves varying from 15 to 34 degrees and up grades of two per cent. As much as 17 empties and 4 loads have been pulled in one train. Under average conditions one charge lasts two hours. The tanks of many ordinary switching locomotives are frequently refilled after the same period of service.”