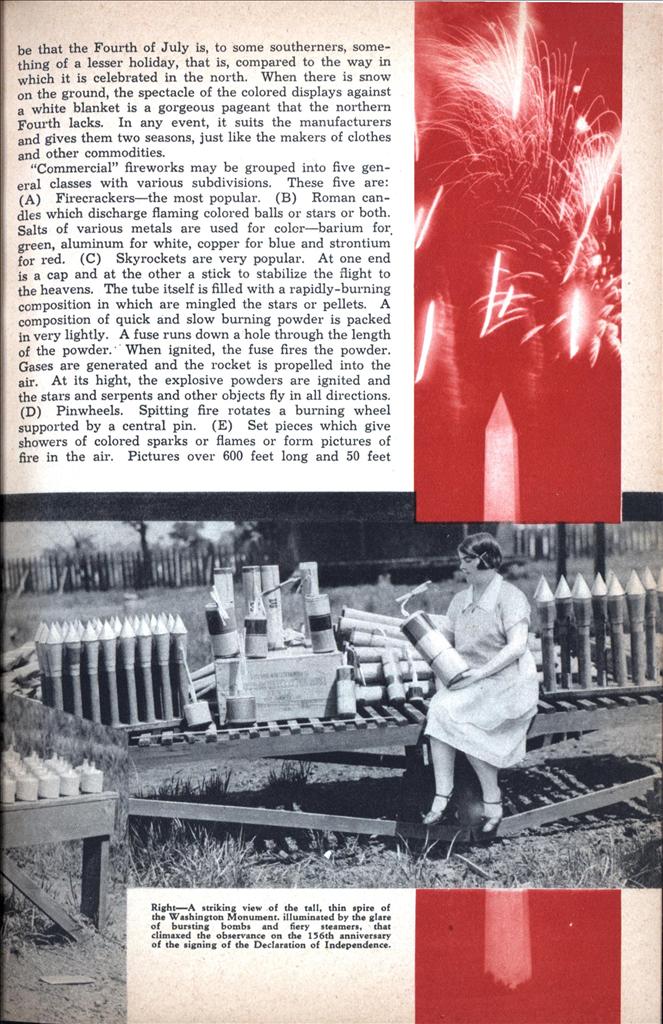 AMERICA spends more than $5,000,000 each year to express, by means of colorful and noisy fireworks her patriotic and religious fervor. It’s a neat little business, the pyrotechnic industry, and has grown tremendously since prehistoric man dabbled in his mute way with the wonder of fire and the fury of sound. It has expanded, too, since that more modern occasion in the 13th century when gunpowder was given to the world and changed history—and methods of celebrating those historical changes.

The industry of fireworks grew with leaps and bounds through the 17th, 18th and 19th centuries and today it is an international trade, with its manufacturers, workers, opponents, bootleggers, sweatshops and all that is part and parcel of the American industrial scene.

Fireworks manufacturing has developed, in its own specialized fashion, into a luxury business. The way to celebrate America’s freedom and her religious feast days is to ignite little, cylindrical red stubs or to light longer, fused affairs which dart through the air with great speed and considerable ease. It isn’t utterly essential, of course, that we celebrate thusly, but it is a tradition, and traditions have a way of persisting. Hence the fireworks manufacturers are nicely established, although they are thought of only once or twice every year.

The patriotic or religious display of fireworks, with its booms, smells, sky pictures and appeal, is a peace-time symbol of the battlefield—the child’s way of viewing war —some of the thrills, noise and flashes and little of the danger of actual bloody combat. It isn’t altogether a realistic picture, if one is to see the thing through, but it possesses the appeal of the parade, if not of the casualty list.

America has, of course, no monopoly on the celebrating of holidays with fireworks. China and Japan use them for many occasions; France on Bastille Day; England on Guy Fawkes Day. Most other European and Latin American countries have their holidays when fireworks are in demand.

Not all the fireworks sold in the United States in 1936 was bought to amuse Junior. About fifty per cent of the sales was to industrial and governmental bureaus. The flares and signal lights used at sea and for military signaling and aeroplane use are all part of the pyrotechnic industry—half of it, in fact.

The United States government conducts a “fireworks college” in Washington, D. C., where bombs, flares and other military devices are studied. That American fairyland, Hollywood, consumes a share of the firework output. Movieland needs pyrotechnics for effects in battles and explosions, and uses smoke bombs for artificial blazes.

And fireworks are used for sham battles. There is the yarn told of a Central American general who faced a revolution. He is said to have ordered several cases of fireworks and to have frightened off skittish revolutionists with them.

The trade calls about forty-five per cent of its sales “commercial”; that is, the goods John J. Public buys for his children—and for his own fun. This buying is seasonal. Part of the sales, five per cent or so, is known as “display” sales—goods sold to amusement parks, fairs, municipalities for celebrating the Fourth and other occasions. Many amusement parks have found it a paying policy to devote part of one evening each week to a fireworks display. Several state fairs have reported increased attendance because of nightly showings of fireworks. Such large-scale exhibits include eye-dazzling spectacles —much more than mere noise for noise’s sake. The sky serves as a stage background for elaborate displays of rockets, candles and more complex displays. It is possible that if the Dionne lassies were “done in pyrotechnics” they would possess far greater “human appeal” than any other display!

Several cities that have banned the sale of fireworks have taken it upon themselves to furnish their taxpayers with safer displays, handled by experts. Milwaukee is one city which has done so.

The “commercial” or public trade is divided into two seasons. The Fourth of July is celebrated in the north and in most other sections of the country with fireworks. But in the south it is Christmas that is celebrated with pyrotechnic outbursts. The reason for the southland doing this is not clear. Evidently several factors are involved. The intense July heat may discourage the added heat wave generated by fireworks. And it may be that the Fourth of July is, to some southerners, something of a lesser holiday, that is, compared to the way in which it is celebrated in the north. When there is snow on the ground, the spectacle of the colored displays against a white blanket is a gorgeous pageant that the northern Fourth lacks. In any event, it suits the manufacturers and gives them two seasons, just like the makers of clothes and other commodities.

“Commercial” fireworks may be grouped into five general classes with various subdivisions. These five are: (A) Firecrackers—the most popular. (B) Roman candles which discharge flaming colored balls or stars or both. Salts of various metals are used for color—barium for green, aluminum for white, copper for blue and strontium for red. (C) Skyrockets are very popular. At one end is a cap and at the other a stick to stabilize the flight to the heavens. The tube itself is filled with a rapidly-burning composition in which are mingled the stars or pellets. A composition of quick and slow burning powder is packed in very lightly. A fuse runs down a hole through the length of the powder. When ignited, the fuse fires the powder. Gases are generated and the rocket is propelled into the air. At its hight, the explosive powders are ignited and the stars and serpents and other objects fly in all directions. (D) Pinwheels. Spitting fire rotates a burning wheel supported by a central pin. (E) Set pieces which give showers of colored sparks or flames or form pictures of fire in the air. Pictures over 600 feet long and 50 feet high have been produced at Crystal Palace, London, where set pieces have been highly developed.

The material for fireworks — gunpowder and other ingredients — is purchased from various manufacturers and then mixed by the pyrotechnic manufacturers. Discoveries and inventions made within the past two hundred years have made many of the now-common effects possible. Yellow sand is introduced to secure golden glows. Camphor produces a fine flame; it is used with aromatic perfumes which mask the unpleasant smells of other ingredients.

Manufacturers are extremely cautious as to the handling of fireworks material. One plant consists of about 200 tiny buildings spread over 100 acres of meadows. Workers, one or two to a shack, keep but a small supply of materials on hand—-enough for a half an hour or so. This supply is constantly replenished from a central source. Precautions are taken to see that no accidental combinations of chemicals occur. Workmen in one building handling one type material may not enter on that day another building housing different material. The charging houses are very frail, and will practically fall apart at the suggestion of an explosion. The wind, too, is watched, and when it blows the wrong way or too strongly, the plant, which is located in Staten Island, N.Y., is shut down.

The $5,000,000 of reported sales were made, for the most part, in America. The export trade is quite meager because of the expenses involved and also because salt air would injure some of the fireworks. But the importing of Chinese “flash” crackers bothers American manufacturers. Statistics show that about 65 per cent of all firecrackers used in this country are made in China.

This means that Chinese coolie labor is in fairly direct competition with American labor. Manufacturers say that our workers’ daily pay of from four to six dollars equals a month’s earnings of a coolie. They also charge that the Chinese “flash” crackers are cheaply made, with quick burning fuses, and are unsafe. Manufacturers state that most accidents are caused by the use of such fireworks. American fireworks, they claim, are more carefully made and possess more-slowly burning fuses. Incidentally, American fire crackers seldom measure more than five inches. This is due mainly to the fact that the government demands that manufacturers make their product safe enough for use by the general public.