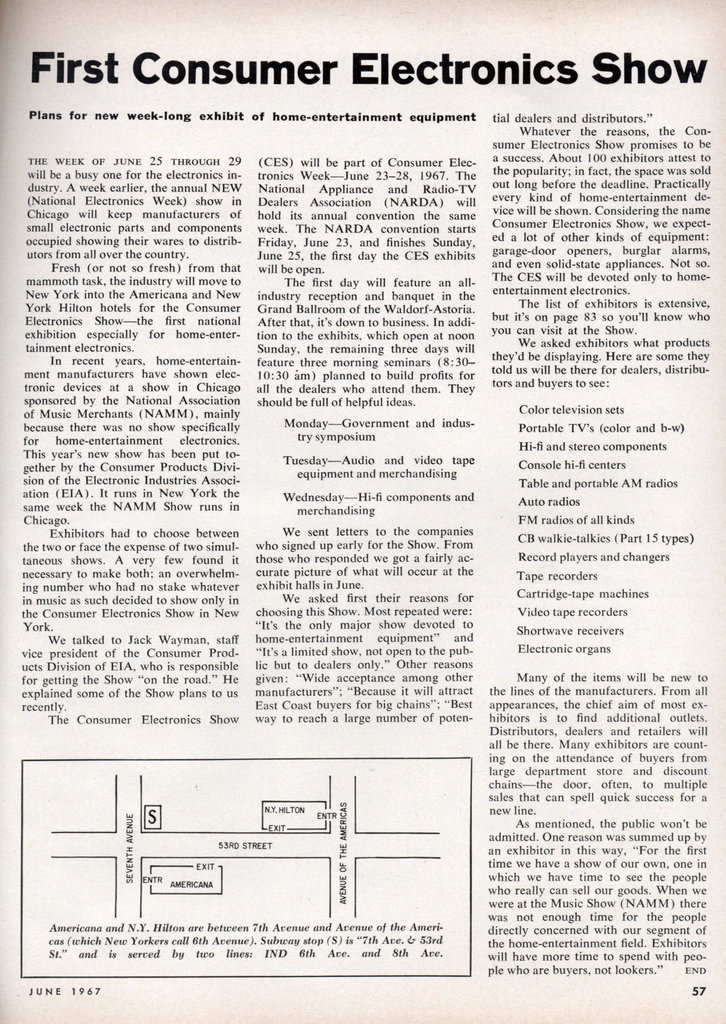 THE WEEK OF JUNE 25 THROUGH 29 will be a busy one for the electronics industry. A week earlier, the annual NEW (National Electronics Week) show in Chicago will keep manufacturers of small electronic parts and components occupied showing their wares to distributors from all over the country.

Fresh (or not so fresh) from that mammoth task, the industry will move to New York into the Americana and New York Hilton hotels for the Consumer Electronics Show—the first national exhibition especially for home-entertainment electronics.

In recent years, home-entertainment manufacturers have shown electronic devices at a show in Chicago sponsored by the National Association of Music Merchants (NAMM), mainly because there was no show specifically for home-entertainment electronics. This year’s new show has been put together by the Consumer Products Division of the Electronic Industries Association (EIA). It runs in New York the same week the NAMM Show runs in Chicago.

Exhibitors had to choose between the two or face the expense of two simultaneous shows. A very few found it necessary to make both; an overwhelming number who had no stake whatever in music as such decided to show only in the Consumer Electronics Show in New York.

We talked to Jack Wayman, staff vice president of the Consumer Products Division of EIA, who is responsible for getting the Show “on the road.” He explained some of the Show plans to us recently.

The first day will feature an all-industry reception and banquet in the Grand Ballroom of the Waldorf-Astoria. After that, it’s down to business. In addition to the exhibits, which open at noon Sunday, the remaining three days will feature three morning seminars (8:30— 10:30 am) planned to build profits for all the dealers who attend them. They should be full of helpful ideas.

Monday—Government and industry symposium Tuesday—Audio and video tape equipment and merchandising Wednesday—Hi-fi components and merchandising We sent letters to the companies who signed up early for the Show. From those who responded we got a fairly accurate picture of what will occur at the exhibit halls in June.

We asked first their reasons for choosing this Show. Most repeated were: “It’s the only major show devoted to home-entertainment equipment” and “It’s a limited show, not open to the public but to dealers only.” Other reasons given: “Wide acceptance among other manufacturers”; “Because it will attract East Coast buyers for big chains”; “Best way to reach a large number of poten- tial dealers and distributors.”

Whatever the reasons, the Consumer Electronics Show promises to be a success. About 100 exhibitors attest to the popularity; in fact, the space was sold out long before the deadline. Practically every kind of home-entertainment device will be shown. Considering the name Consumer Electronics Show, we expected a lot of other kinds of equipment: garage-door openers, burglar alarms, and even solid-state appliances. Not so. The CES will be devoted only to home-entertainment electronics.

The list of exhibitors is extensive, but it’s on page 83 so you’ll know who you can visit at the Show.

We asked exhibitors what products they’d be displaying. Here are some they told us will be there for dealers, distributors and buyers to see: Color television sets Portable TV’s (color and b-w) Hi-fi and stereo components Console hi-fi centers Table and portable AM radios Auto radios FM radios of all kinds CB walkie-talkies (Part 15 types) Record players and changers Tape recorders Cartridge-tape machines Video tape recorders Shortwave receivers Electronic organs Many of the items will be new to the lines of the manufacturers. From all appearances, the chief aim of most exhibitors is to find additional outlets. Distributors, dealers and retailers will all be there. Many exhibitors are counting on the attendance of buyers from large department store and discount chains—the door, often, to multiple sales that can spell quick success for a new line.

As mentioned, the public won’t be admitted. One reason was summed up by an exhibitor in this way, “For the first time we have a show of our own, one in which we have time to see the people who really can sell our goods. When we were at the Music Show (NAMM) there was not enough time for the people directly concerned with our segment of the home-entertainment field. Exhibitors will have more time to spend with people who are buyers, not lookers.”