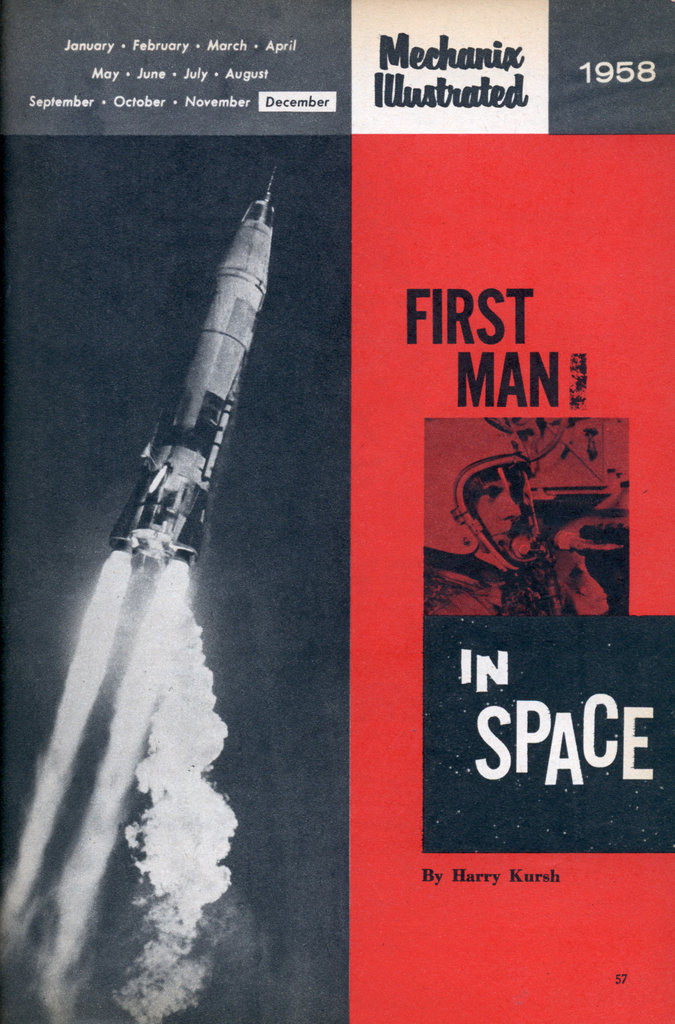 YOU’RE a special breed. That’s why you’ve been selected to be the first man into space. You squirm nervously in your space suit inside the ballistic-like metal container designed to hurl you into orbit. Outside, in an underground blockhouse, the project engineer’s finger is poised over the blast-off button. The countdown is in its final secondsâ€”five, four, three, two, oneâ€” fire! …

It all started about five years ago. You were 28 then but had been crazy about flying since you were a kid. You were just out of college with a solid background in science and engineering, ready to be converted into a walking encyclopedia on such subjects as space medicine, electronics, mathematics, astronautics, rocketry and thermodynamics.

When you volunteered for space-pilot training you had the primary requisites: you were under six ft. and between 165 and 185 lbs. As evidence of emotional stability, you were married and the father of a child. You passed a battery of psychological tests that proved you could work as an integral part of a team or remain alone for days or weeks at a time.

The training program was rigorous and demanding. You lived, ate and breathed spaceâ€”night and day, seven days a week. You catapulted out of supersonic jets, performed strenuous and intricate maneuvers at speeds up to 2,000 mph, worked with engineers (talking their language), attended endless classes and. traveled coast-to-coastsubjecting yourself to a series of the most murderous tests that science could devise.

You were strapped into a giant centrifuge at the Johnsville, Pa. Naval Air Development Center and whirled at speeds that made you feel as if you were smashed against a stone wall at 100 mph. Sometimes you bled from your eyes, ears, nose and mouth. At Randolph Air Force Base in Texas, you lived in a space chamber, all by yourself, completely out of touch with “earth” for four or five days in a row.

Then you were readyâ€”and chosen from a handful of selected volunteers to make the first manned flight into outer space. When you step into your space suit you will have the responsibility for an experiment that has cost almost ten billion dollars and taken ten years of extremely difficult research. Yet if a minute hole should develop in your suit in outer space, your blood will boil and you will be dead in 15 seconds.

You think about such “details” as you are escorted to the Cape Canaveral, Fla., launching pad. The chief project engineer comes over to supervise placing the helmet over your head and for a final briefing. From now on you will communicate only over the intercom.

About 100 feet away, in a steel and concrete blockhouse built two stories below the ground, a score of men sit before an incredible maze of control panels. Some have their eyes fixed on a battery of closed-circuit TV screens. They watch you being strapped into a reclining chair inside the space vehicle. Its gleaming metal surface is flawlessly smooth and it’s laden with instruments which leave no room for error.

It is a blunt-nosed shell about ten ft. long and seven ft. wide at the base, with built-in tail fins that have to spring into position more than 100 miles upâ€”otherwise you’ll have to explode yourself out still attached to the base of the cockpit, returning to earth like a flying platform â€”under a huge parachute.

Now a huge crane picks up the space craft and wheels it to a washing stand where it is thoroughly bathed with deionized water to remove mineral impurities and prevent “hot spot” corrosion, which could spell immediate, broiling death for you on the fringes of outer space. The crane then moves your space capsule to the gigantic launching pad where it is fixed to a three-stage missile, descendant of the famous Atlas ICBM. Fueling is completed. The last 30 seconds of countdown are underway. . .

There is an ear-shattering roar and the pad is engulfed in a mountain of purplish flame. Did a fuel tank explode? No, you’ve been luckyâ€”so far. But your life still isn’t completely in your hands. Inside the blockhouse the range safety officer points his finger at the “destroy” button. If anything goes wrong on his instrument panel he may have to wipe you out in a flash.

You’re now zooming over the ocean, nearly 100 miles up, traveling at five times the speed of sound.

You have had nothing to do up to now; all controls are automatic. You just sit back and grit your teeth as the acceleration forces squeeze your body in a two-ton clamp.

You think the blood is draining from your body, your head feels enormous. Your facial skin ripples like jelly and someone is hammering at your teeth with a baseball bat. You struggle for every breath and you can’t lift your armsâ€”then you black out.

Seconds later your cockpit lurches forward in one final burst of speed. The third-stage rocket falls away and you come to in time to watch a yellow light flash, indicating your tail fins are out and automatic guidance has come to an end. You touch off the small outside jets which will keep your nose at the proper angle.

Suddenly you become aware of the eerie silence and the strange feeling of weightlessness (nausea) in your throat. You’re in orbitâ€”the first man in outer spaceâ€”circling the earth at 18,000 mph. You’ll be up here for three days.

You’re busy checking scores of instruments for the next few hours. A special pad inside your helmet keeps the sweat from rolling into your eyes. You’re in an almost perfect vacuum nearly 300 miles from earth and you anxiously scan the cockpit from time to time for leaks.

You have to check the oxygen converter constantly. If it fails once, you’ll suffocate. You watch the pressure pump that forces food and water (through a tube) into your mouth. Without that pressure you may starve to death, or drown, unable to overcome the effects of weightlessness which will cause liquids to regurgitate.

You check the automatic radiation counter to make certain you aren’t being bombarded to death by radiation.

Everything seems to be going well so you try to relaxâ€”but not for long. After the first 24 hours you’ve got psychological problems. You feel exhausted and you’d like to close your eyes for a few minutesâ€” but you can’t! You suddenly hear and see things nobody has ever mentioned. “Am I having hallucinations or am I going out of my mind?” you ask yourself.

Then a green light flashes and a loud buzzer goes off in your helmet. It’s the signal to return to earth. Re-entry is about to begin.

You touch off a battery of retrorockets with your fingertip controls and the ship begins to lose altitude rapidly, returning to earth in an eliptical orbit. You’ve got to keep her at an exact, flat angle. If you miss by a fraction, you’ll hit the earth’s thickening atmosphere with such force that you’ll roast alive, despite the automatic refrigerating system.

You’re also worried that if the angle of re-entry isn’t flat enough the excessive deceleration force may crush you to death inside the cockpit, or the craft itself will burst apart.

It gets fiercely hot inside the cockpit. You think your space suit is on fire. But you’ve got one more maneuver to perform. Struggling against every breath that sears your lungs, you manage to touch off the last battery of retrorockets. Abruptly, your craft turns nose-up and you come down on the broad base of the cockpit for a gentle landing.

In the air above the jets that saw you down dip their wings in salute. Pandemonium breaks loose as scientists race to the steaming metal ship. The news is already being flashed around the world. But right now you don’t give a damn. You smile a happy grin and then sit back, bone-tired, and wait for them to come and get youâ€”the first man back from space.