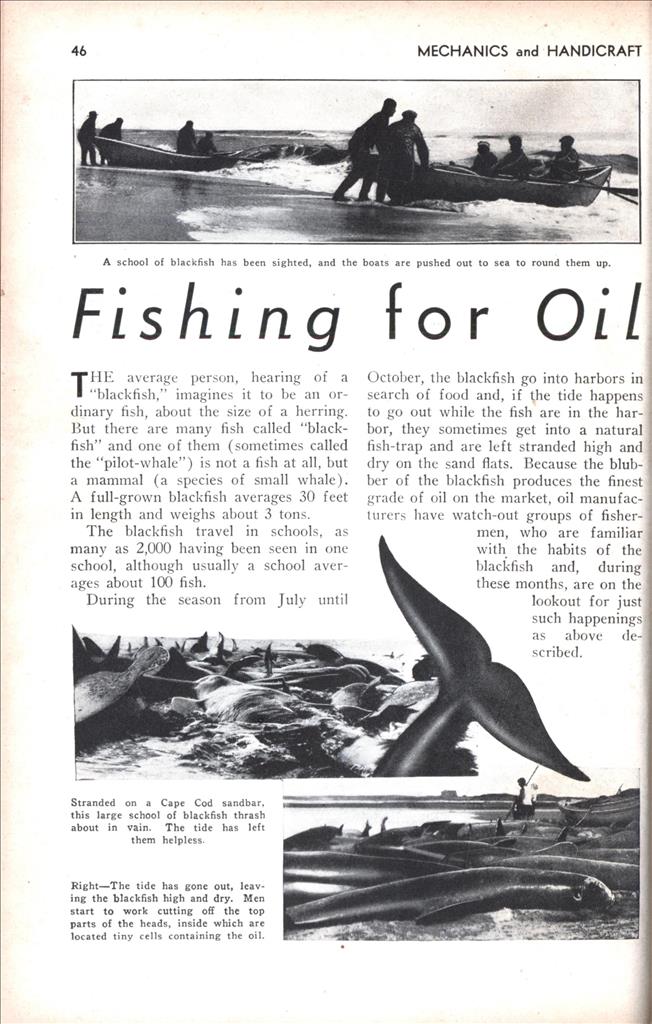 The blackfish travel in schools, as many as 2,000 having been seen in one school, although usually a school averages about 100 fish.

During the season from July until October, the blackfish go into harbors in search of food and, if the tide happens to go out while the fish are in the harbor, they sometimes get into a natural fish-trap and are left stranded high and dry on the sand flats. Because the blubber of the blackfish produces the finest grade of oil on the market, oil manufacturers have watch-out groups of fishermen, who are familiar with the habits of the blackfish and, during these months, are on the lookout for just such happenings as above described.

When a school of blackfish is stranded, the fishermen immediately go out on the sand flats where they are floundering, to lance them; after which the fishermen begin cutting off the tops of the heads, or “blubber caps,” which contain this very fine grade of oil. The quality of oil depends greatly on the freshness of the blubber, so they must work fast before the carcass begins to deteriorate.

In the meantime the oil manufacturer is notified and trucks are sent to the scene of the cutting-up, to carry the blubber to the refinery promptly.

Only the top of the head of each blackfish is considered worthwhile. Therefore, after these caps are removed from the blackfish, the carcass must be disposed of, for one can imagine how offensive a single decomposing blackfish would be—to say nothing of a whole school of them.

The workmen dig a large pit, on the shore, from ten to fifteen feet deep. Each carcass is dragged to the pit by caterpillar tractors (sometimes teams of horses are used in the hauling). When all the carcasses are in the pit, they are covered over with dirt.

When the “blubber caps” arrive at the refining plant, the men begin at once preparing them for the try-pots. These men have to be efficient in this particular line, for good oil depends greatly on knowing just where to cut the blubber, and to reject just those portions that would not produce good oil. They call this process “making bible leaves,” as the blub- ber must be cut into very thin slices. This is important because a small piece of blubber, if examined through a microscope, would show thousands of tiny cells, each cell containing oil; therefore, the blubber must be cut fine so as to cut into as many of the cells as possible; then, when the minced blubber it put into the try-pots, all the oil will be extracted.

The try-pots are steam-jacketed kettles and the blubber is tried very slowly, in order not to burn the oil and, also, to give the oil ample time to seep from the blubber. After removing from the try – pots, further refining takes place. Three years elapse before the process is finally completed, during which there is a 50% loss. This long and careful process of refining is to give the oil long life.

Machinery, when lubricated with this fine-grade oil, will function properly whether in frigid conditions or in the most intense heat of a tropical zone.

The following incident is interesting: a torpedo was sunk deep in mud for several months. Mud and water soaked into the casing and, when drawn to the surface, the torpedo was found to be badly rusted, except the gyro gear, which had been so protected by blackfish oil that it had not rusted in the least.

This exclusive story was obtained from Mr. Howard Wordell, manager of the Nye Oil Works, of New Bedford, Mass.