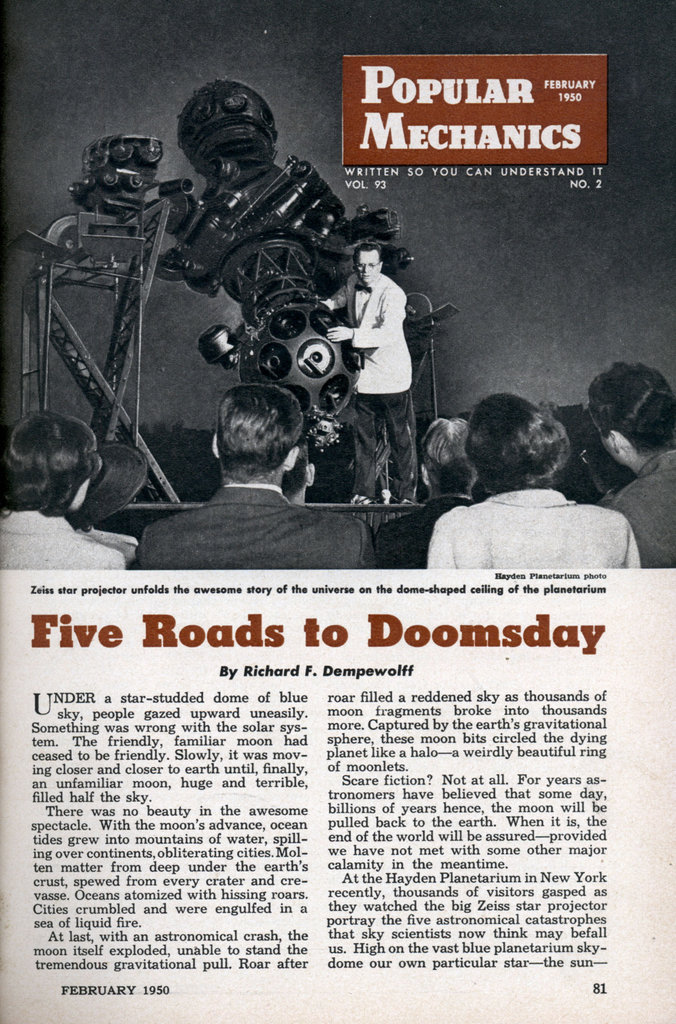 UNDER a star-studded dome of blue sky, people gazed upward uneasily. Something was wrong with the solar system. The friendly, familiar moon had ceased to be friendly. Slowly, it was moving closer and closer to earth until, finally, an unfamiliar moon, huge and terrible, filled half the sky.

There was no beauty in the awesome spectacle. With the moon’s advance, ocean tides grew into mountains of water, spilling over continents, obliterating cities. Molten matter from deep under the earth’s crust, spewed from every crater and crevasse. Oceans atomized with hissing roars. Cities crumbled and were engulfed in a sea of liquid fire.

At last, with an astronomical crash, the moon itself exploded, unable to stand the tremendous gravitational pull. Roar after

roar filled a reddened sky as thousands of moon fragments broke into thousands more. Captured by the earth’s gravitational sphere, these moon bits circled the dying planet like a haloâ€”a weirdly beautiful ring of moonlets.

Scare fiction? Not at all. For years astronomers have believed that some day, billions of years hence, the moon will be pulled back to the earth. When it is, the end of the world will be assuredâ€”provided we have not met with some other major calamity in the meantime.

At the Hayden Planetarium in New York recently, thousands of visitors gasped as they watched the big Zeiss star projector portray the five astronomical catastrophes that sky scientists now think may befall us. High on the vast blue planetarium sky-dome our own particular starâ€”the sunâ€”suddenly did what more than 30 stars in the firmament do each year. It “blew up,” releasing incredible amounts of heat and energy, under which the earth shriveled in sudden, hot death.

Spectators shivered under the second possibility as they watched a dying sun go into a long period of cooling until Arctic chill gripped an unfamiliar earth. Ice began a death march down the mountains to erase all vestiges of life on a planet whose eventual chill achieved the sublime frigidity of absolute-zero, or about minus 459.4 degrees F.

The third great disaster from the thousand-eyed projector involved a hit-and-run star from space colliding with our own sun, resulting in a superatomic explosion that destroyed our entire solar system.

Similar was the approach of a wandering comet toward the earth. Across the celestial stage it came, fiery tail growing bigger and bigger, catapulting under terrific speed untilâ€”whooooom! It collided with terrific impact against a shuddering world.

The fifth calamity, of course, was the return of the moon.

Of all these five roads to doomsday, planetarium astronomers have found that people fear most a collision of the earth or sun with another star.

The planetesimal theory, explaining the formation of our solar system, is based on the idea that our sun, once much bigger than it is now, collided with or came too close to another star billions of years ago, and that we and our neighbor planets are the result.

Actually, such a collision is the most remote of all the probable ends of the world. Why? Astronomers merely point to the roominess of our universe.

The universe is made up of billions of wispy saucer-shaped spirals known as galaxies. There’s quite a bit of vacuum between them â€” hundreds of thousands of light-years, in fact. It takes the light from the nearest one 750,000 years to reach us. If it disappeared from the sky 749,999 years ago we wouldn’t know it until next year.

Each of those wispy galaxies is made up of billions of stars. We live in such a galaxy somewhere off the center of the saucer. What we call the Milky Way is the edge of our saucer, made up of stars some of which would put our own sun to shame. There’s one called Antares that’s so big we could put our sun in the center of it, include all our planets in their orbits around it, and Mars still would stay inside the rim of-Antares. That star is almost 2-1/2 billion miles in diameter.

So, you can readily see that the stars in our galaxyâ€”and any other galaxyâ€”have plenty of space to operate without colliding. The star nearest our sun is Proxima Cen-tauriâ€”about 4-1/2 light-years away, or 25 trillion miles. If you still think there’s a remote possibility of collision then you still have no idea of the immensity of space.

Imagine a couple of ping-pong balls 500 miles apart crashing into each other. That’s about the proper scale to use for the sun and Proxima.

So the remoteness of our sun or earth sideswiping another star is very remote indeed. Besides, there’d be plenty of warning.

With great modern telescopes trained on the heavens, astronomers keep pretty fair track of what’s in the road. We’d have quite a few thousand years to get busy colonizing another solar system.

Old-time astronomers had to use crude triangula-tion to tell star distances and movements. Today’s professional stargazers use the spectrograph, a prismatic instrument through which the light of a heavenly body is passed. Chemical elements of the star cause the light to break down into specific colors. The color lines shift depending on whether the star is coming or going. With this neat gadget, astronomers have discovered that most galaxies are going away from us at a good clip. The spectrograph informs our astronomers that right now our sunâ€” taking us with itâ€”is moving toward the star cluster Hercules at a rate of about

12-1/2 miles per second. If the sun should pile into one of these big stars (a few billion years from now at that snail’s pace) we’d never know what happened. Hot pieces of both suns would fly off in all directions. Earth and all the planets would vaporize under the tremendous heat energy released, or else the sun would lose its gravitational grip on us and we’d go flying off into space.

What are the chances of cracking into a Hercules star? Very poor.

Dr. Lloyd Motz, of Columbia University, points out that if our whole solar system suddenly scooted off through space it might even travel through whole galaxies of stars without getting appreciably close to a collision course. But, it could happen. Maybe.

What about the comet collision? From time immemorial people who have seen these mysterious bearded wanderers from space sweep in toward the earth have wondered what could prevent them from becoming trapped in the earth’s gravitational field, and being pulled in to wreak terrible destruction. “A head-on collision between the earth and a comet is possible, though not probable,” says Gordon A. Atwater, chairman and curator of the planetarium. “Comets have been known to pass within 100,000 miles of the sun, so they naturally had to pass a point where the earth might have been at the time.”

If a runaway comet should hit the earth, it would be the least disastrous of the possible calamities. Though the head of a comet may be as big as the earth, it’s not as dense. There’d be a crash all right and, as one planetarium astronomer succinctly put it, “It would be moving day for a lot of people.” But star experts*know that such a collision would create only local destruction. The concussion would be terrific. The earth would shudder in a worldwide earthquake. Surface heat of the comet’s head, caused by friction as the body zipped through earth’s atmosphere, might start huge fires. Cities in the vicinity would be wiped out, but a lot of the world would be left.

Less remote roads to doomsday than those requiring celestial collisions may be paved by the antics of the sun and moon, according to the planetarium experts. The business of the sun becoming a nova would purely finish us off. What is a nova?

Old-time astronomers often noticed bright stars suddenly appear in the heavens. Now with super telescopes like the ones at Palomar and Wilson, astronomers may watch an “average of about 30 a year. They’re not new stars. They are stars that suddenly for no accountable reason, blow up â€”release tremendous amounts of heat and energy, then simmer down again to a normal glitter. Sometimes, a supernova will blow up completely and disappear. That is what the astronomers say might happen to our own sun some day. By complicated mathematical formulas they have been able to calculate the normal surface temperature of the sun at something like 11,000 degrees F. Inside, it’s estimated at around 70,000,000 degrees. If the sun became a nova, that inside heat is what we’d get. People on the day-side of the earth would fry to an instantaneous crisp. Those on the night-side would never know what happened, for within 8-1/2 minutes the entire world â€” and all our other planets with it â€” would be turned into nothing but a thin gaseous vapor.

Many astronomers laugh at this possibility, however. “Nobody needs to worry about the sun becoming a nova,” says Dr. Motz of Columbia, “for the only novae recorded have been limited to blue-white, or exceedingly hot stars and, as we know, the sun is not one of these. Furthermore, we have learned by keeping our eyes glued to telescopes that the same stars become novae again and again. If our sun were going to blow up, it would have done it already. It has had some 3 billion years to make up its mind.”

Of all the possible doomsdays, two are bound to happen because they depend on the running down of the universeâ€”a oneway, inexorable process. The earth is slowing down at a rate of 1/1000 second per century as a result of friction. As it loses motion, the sun gains rotational motion, and the moon moves out from the earth. Eventually, the length of each day will be increased to a month, and about that time the moon will begin to return earthward.

You’ve already seen what’s liable to happen when that occurs. The chances are that no one will be around to witness it. ‘Way before days become a month long, everyone will be well charred from overdoses of sun, or dead of exhaustion from running around the world to avoid it.

Incidentally, the moon can never crash into the earth, so don’t give that another thought. The barrier is known as Roche’s limit. It’s about 10,000 miles above the earth’s surface, and is the point at which gravitational forces will be so great that the moon will be torn asunder by them.

More certain than anything, according to planetarium astronomers, is that the sun will burn out. It’s bound to, since its energy is being burned up daily. This, of course, will be a gradual process. An ice age will freeze everything solid, and perpetual snows will drift across a forlorn world.

But here again, scientists know, there probably won’t be anyone around to witness the interesting change. In his book, “The Birth and Death of the Sun,” astronomer George Gamow has spoiled the dream of anyone with hopes of freezing to death due to the sun’s demise.

Instead of being frozen, he says, life on earth will probably burn up anyway, since all stars that burn out give one last burst before they go, and the sun at that stage will leap 20,000 or 30,000 degrees.

When will all this happen? Well, barring collisions, the sun is good for another 20 billion years at least. Planetarium officials love to recall the aged woman spectator who, after hearing this, came up to the narrator when the show was over and asked, “Did you say 20 million years?”

“Oh,” said the woman with a sigh of huge relief. “I thought you said 20 million.”