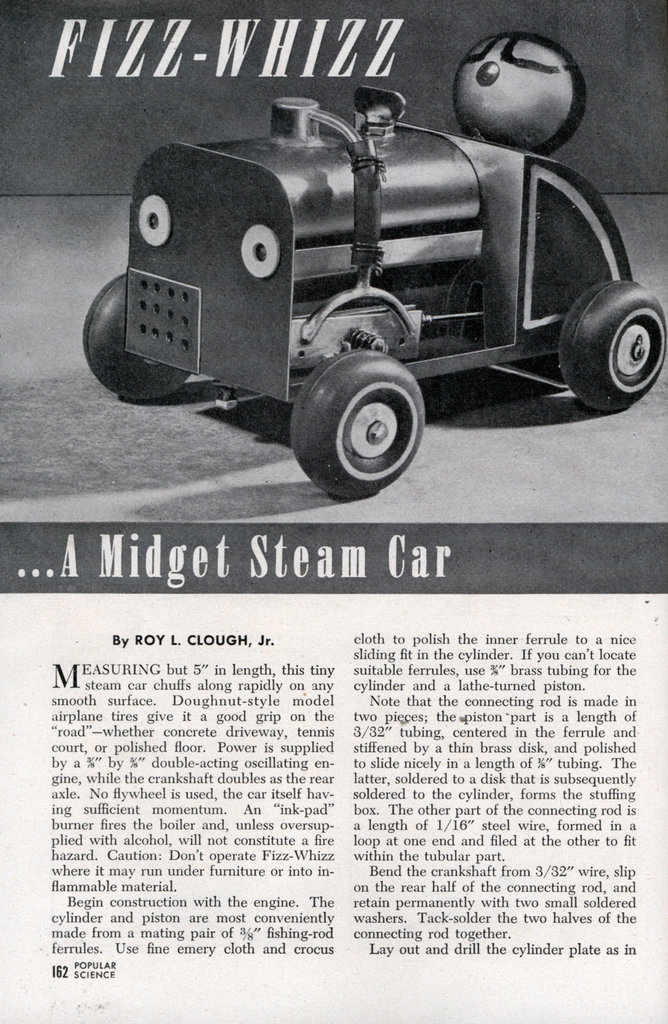 MEASURING but 5″ in length, this tiny steam car chuffs along rapidly on any smooth surface. Doughnut-style model airplane tires give it a good grip on the “road”â€”whether concrete driveway, tennis court, or polished floor. Power is supplied by a 3/8″ by 5/8” double-acting oscillating engine, while the crankshaft doubles as the rear axle. No flywheel is used, the car itself having sufficient momentum. An “ink-pad” burner fires the boiler and, unless oversup-plied with alcohol, will not constitute a fire hazard. Caution: Don’t operate Fizz-Whizz where it may run under furniture or into inflammable material.

Begin construction with the engine. The cylinder and piston are most conveniently made from a mating pair of 3/8″ fishing-rod ferrules. Use fine emery cloth and crocus cloth to polish the inner ferrule to a nice sliding fit in the cylinder. If you can’t locate suitable ferrules, use 3/8″ brass tubing for the cylinder and a lathe-turned piston.

Note that the connecting rod is made in two pieces; the piston part is a length of 3/32″ tubing, centered in the ferrule and stiffened by a thin brass disk, and polished to slide nicely in a length of 1/8″ tubing. The latter, soldered to a disk that is subsequently soldered to the cylinder, forms the stuffing box. The other part of the connecting rod is a length of 1/16″ steel wire, formed in a loop at one end and filed at the other to fit within the tubular part.

Lay out and drill the cylinder plate as in Fig. 1, making certain that the holes are aligned parallel to the sides. Tap the center hole 6-32, screw in a 1/2″ stud, and solder the plate to the cylinder. The steam ports are then drilled through the cylinder wall, as in Fig. 2. Cut out and bend the valve plate (Fig. 3) from 1/16″ brass. Bend the mounting lug with care in order not to impair the flatness of the face, and drill the mounting holes and a centered No. 29 hole for the pivot stud.

Assemble the uncompleted engine on a board as indicated in Fig. 4. A sheet-metal strip with a 3/32″ hole near one end is mounted over a similar hole drilled 1/4″ from the edge of the board.

Oversize holes for the screws holding this strip permit adjustment to get the crankshaft precisely vertical. The pivot screw on the cylinder fits in an oversize hole in the wood about 3-1/2″ from the crank and 1/4″ from the edge. Adjust the cylinder and valve plate so that the piston just closes the upper port at top dead center; then screw the plate to the board at that point.

Turn the crank 90 deg. (Fig. 4) and with a 1/16″ drill in the port in the upper . end of the cylinder, turn the drill just enough to form a dimple in the valve plate beneath. Rotate the crank 180 deg. and make another dimple; then disassemble the engine and drill through the valve plate the two holes thus located.

To spot the other two ports, remove the piston and turn the cylinder on the valve plate until the previously drilled holes line up. Push a close-fiting drill or pin through, (Fig. 5) while another port is dimpled at the opposite end. The pin is removed, the other port aligned, and the fourth port located.

Build up a steam manifold from 1/8″ tubing and solder to the valve plate as shown in the photos. An easy way to do this is to peg the parts together with bits of wooden match-stick, flow on solder, and remove the pegs. Lap the valve and cylinder plates together with fine emery powder until smooth and flat, clean well, solder in the cylinder ends, and assemble the engine with a light spring and a 6-32 nut.

Use tin-can metal for the chassis and bulkhead. Make a cardboard pattern to the exact dimensions shown and trace around it on the tin plate with a scriber. Cut out, bend the chassis to shape, and solder together, but leave the back flap open until you are ready for final assembly.

The burner is simply a piece of tin plate folded over to hold some wicking and a piece of screen. Make the boiler from .024″ sheet brass curved to an elliptical section and fitted with two ends. For maximum strength, use a few rivets as well as solder on the longitudinal seam. Tack-solder the ends in place, flange over the edges of the shell with hammer taps, and fill the recesses thus formed with solder. For a steam dome, cut a 1/2″ length of 1/2″ tubing, solder on an end cap and steam line, and older the dome over a 1/8″ hole in the top of the boiler. As a filler cap, solder on a nut and use a wing screw and washer. Though not used on the model pictured, a safety valve is desirable. Solder on a short length of 1/8″ tubing near the front of the boiler, and fit it with a spring-loaded bolt to hold a disk of soft automobile gasket material against the upper edge.

For a front axle, use 1/16″ steel wire passing through a swivel clamp. The steering link is a piece of wire looped around the axle and run back through a tubular guide. A row of holes in the chassis to take the bent end of this wire permits adjustment. The wheels, obtainable in a model-airplane shop, shouldn’t exceed 1-3/8″ in diameter for best performance. Retain the front ones on the axle by four small soldered washers.

To assemble Fizz-Whizz, insert the engine with the bearings on the crankshaft and solder the bearings to the inside chassis floor. Mount the engine on a wooden pillow block and shim it carefully to insure equal steam intake on both strokes. Adjust the two-part connecting rod for correct piston travel and solder it permanently together. Hold the boiler in place with a drop of solder at each end, and use neoprene tubing to couple the steam line. “Key” the rear wheels to the axle by means of little lugs of solder adhering to the steel axle and fitting into drilled recesses in the aluminum hubs. Be sure to remove the rubber tires during soldering.

Attach a painted wood ball to simulate the driver, using a wood screw, and solder the back in place. Fill the boiler about half full, squirt about six medicine droppers of alcohol on the burner pad, light, and slide into place. Block up the model so that the rear wheels clear the table and turn them a few times after the boiler has begun to steam to clear the engine of condensate. Then adjust the tie rod for a circle, place Fizz-Whizz on the floor, and give it a gentle push.