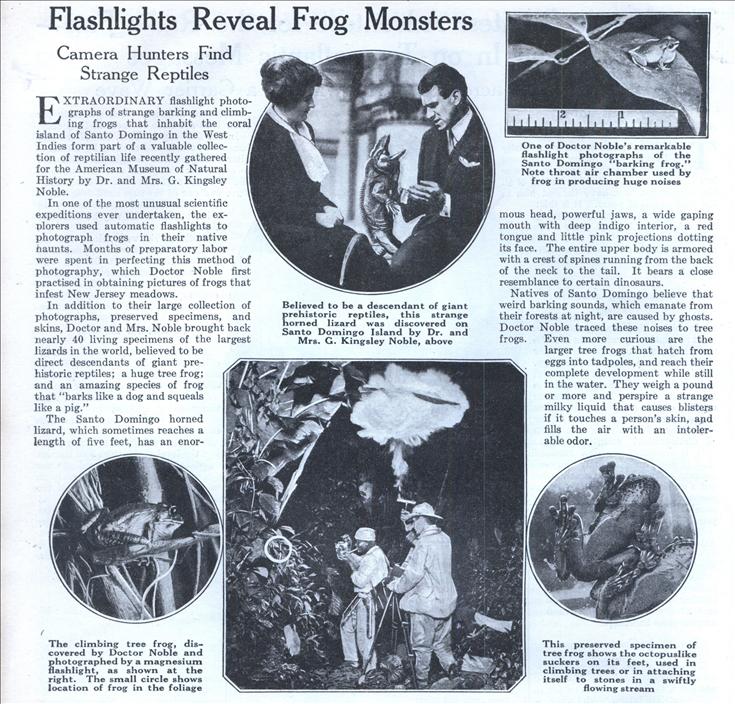 In one of the most unusual scientific expeditions ever undertaken, the explorers used automatic flashlights to photograph frogs in their native haunts. Months of preparatory labor were spent in perfecting this method of photography, which Doctor Noble first practised in obtaining pictures of frogs that infest New Jersey meadows.

In addition to their large collection of photographs, preserved specimens, and skins, Doctor and Mrs. Noble brought back nearly 40 living specimens of the largest lizards in the world, believed to be direct descendants of giant prehistoric reptiles; a huge tree frog; and an amazing species of frog that “barks like a dog and squeals like a pig.”

The Santo Domingo horned lizard, which sometimes reaches a length of five feet, has an enormous head, powerful jaws, a wide gaping mouth with deep indigo interior, a red tongue and little pink projections dotting its face. The entire upper body is armored with a crest of spines running from the back of the neck to the tail. It bears a close resemblance to certain dinosaurs.

Natives of Santo Domingo believe that weird barking sounds, which emanate from their forests at night, are caused by ghosts. Doctor Noble traced these noises to tree frogs. Even more curious are the larger tree frogs that hatch from eggs into tadpoles, and reach their complete development while still in the water. They weigh a pound or more and perspire a strange milky liquid that causes blisters if it touches a person’s skin, and fills the air with an intolerable odor.