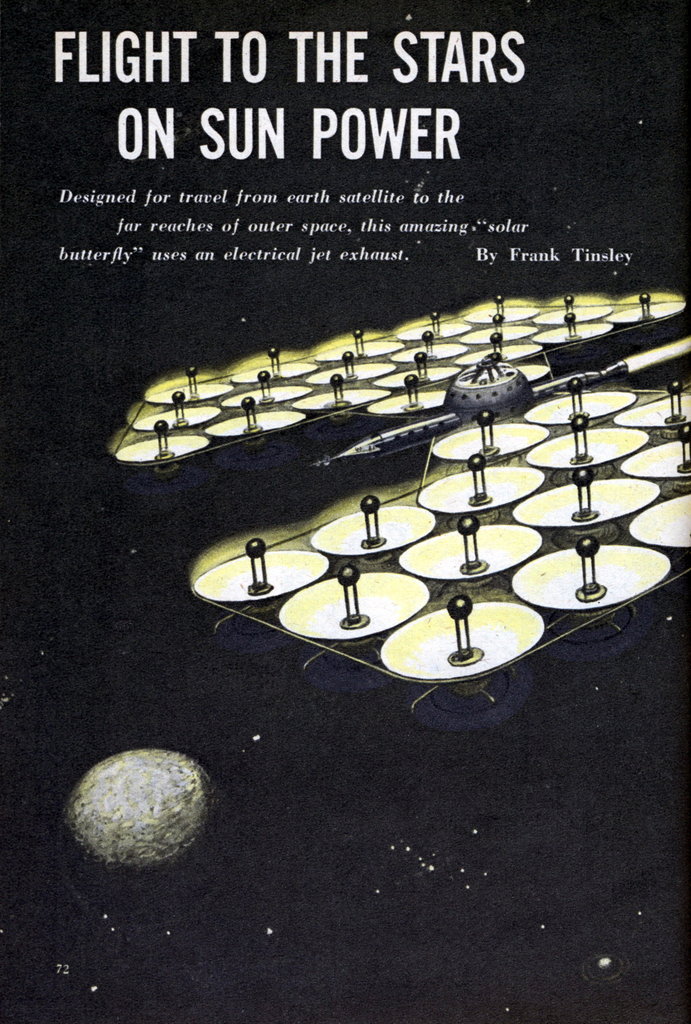 FLIGHT TO THE STARS ON SUN POWER

Designed for travel from earth satellite to the far reaches off outer space, this amazing “solar butterfly” uses an electrical jet exhaust.

PRESIDENT EISENHOWER’S recent announcement of a federally-sponsored earth satellite project tears aside the curtain of secrecy that has long veiled our space travel research. To be launched sometime in 1957-58, Ike’s “cosmic basketball” will rocket to an orbit some two or three hundred miles above the earth’s surface and there circle the globe every 90 minutes at a speed of 18,000 mph. This tiny artificial moon, about two feet in diameter and weighing around 100 pounds, is the first of our space targets for tomorrow.

Known as the Minimum Orbital Unmanned Satellite Of The Earth and irreverently nicknamed the Space Mouse, this first toddler into outer darkness will telemeter its findings to earthbound laboratories until gradually decreasing speed drops it to destruction. The Mouse’s 50-pound payload ineludes Geiger, cosmic ray and aurora particle counters, a magnetometer to measure accurately the earth’s magnetic field, and other types of recording instruments. Electric power will come from solar batteries and a small radar beacon will permit easy tracking. Despite a relatively short lifeâ€”a few days or weeks depending on its starting altitudeâ€”the Mouse will more than pay for itself in upper atmospheric data now unavailable.

The second, more ambitious step of the program, is a larger, man-carrying space station in which a crew of adventurous scientists will make their observations directly. Unimpeded by atmospheric blur, their telescopes should bring us a vastly clearer picture of the universe, and their other instruments a more accurate idea of the conditions and limitations of space travel.

The third stride envisaged by the plan will take us to our great satellite, the moon. Here, scientific colonies can prepare our space pioneers for further discoveries and provide bases where planetary spaceships can be built and launched. Equipped with these out-of-this-world craft, man will then be ready for the final leap of the seriesâ€”the exploration of Mars, Venus and our other neighbors of the solar system.

In anticipation of these four primary steps, many ingenious spaceship designs have been conceived by forward-looking astronautical engineersâ€”and duly reported to MI readers. Latest of these is the proposal of Dr. Ernst Stuhlinger, ex-German rocket scientist who currently heads the Missile Section at our great Redstone Research Arsenal. The design is based upon a thorough knowledge of the physics of space flight and presently possible power plants. The Doctor is convinced that due to the enormous amounts of fuel required to break through the earth’s gravitational grip, interplanetary spaceships must be built on and launched from a gravity-free earth satellite.

At this point, however, Stuhlinger parts company with the proponents of rocket propulsion. If conventional rocket engines are used, he claims, 170 pounds of fuel would have to be ferried to the satellite for every pound of the ship’s payloadâ€”and each of the 170 would require 1,000 pounds of ferry fuel to lift it through the earth’s gravity. The staggering cost and difficulty of such a project is apparent.

The Doctor considers it obvious, therefore, that chemical rocket propulsion is out for interplanetary flights, even though it is technically possible. As a suggested solution, he would accelerate the particles that compose the exhaust stream by means of a powerful electric field, thus by-passing the temperature problem. The idea, he is careful to point out, is not original with him. It has been advanced by other space sharps and was described in the Feb. ’54 issue of MI.

In Stuhlinger’s version Cesium or Rubidium vapor replaces chemical fuel. Introduced into a ceramic propulsion chamber, the Cs or Rb atoms strike a grid of incandescent platinum plates. The platinum absorbs their outermost electrons leaving positively charged ions which pass through the grid into a thrust chamber. Here, the ion stream is accelerated to extremely high velocities by negatively charged electrodes around the chamber’s real nozzle and is discharged in the form of an electrical jet exhaust.

To prevent the spaceship from building up a negative charge from the split-off electrons, these must be ejected simultaneously and at the same rate as the ions through supplementary electron thrust chambers that surround the ion nozzles in a trough arrangement. Unless the ions’ accumulated charge is neutralized immediately upon leaving the thrust chamber, it will tend to repel following ions in the discharge stream and slow down jet velocity. This is the “space charge effect” familiar to designers of electron tubes. To counter it, the separate streams of ions and electrons are combined about an inch outside their thrust nozzles, thus cancelling out the objectionable charge.

To run his electrostatic plant, Dr. Stuhlinger’s design requires 7,000-8,000 kilowatts of power. After considerable study, he rejected all the conventional power sources, including the atomic pile, as being far too heavy. Sun power seemed a better bet. Approximately one kilowatt of radiant energy falls on each square meter of space and the Doctor decided to put this to use. He could use the Abbott-type reflector/steam boiler/turbo-generator, or the simpler and lighter solar battery described in MI. Since the present efficiency of the battery is only about 10 per cent of the turbo-generator’s he settled on an Abbott-type apparatus.

After balancing the pros and cons of power versus weight Stuhlinger arrived at what he now regards as the best power plant available.

Stuhlinger’s power plant is made up of 40 solar power units, mounted in two groups on either side of the spaceship’s body, like the wings of a gigantic butterfly. Each is self-contained and can function independently in case a small meteor strikes one of its neighbors. The solar unit consists of a parabolic mirror, 50 feet in diameter, which concentrates the sun’s heat on a boiler set at its focal center. Steam thus developed, turns a turbine which is geared to a 200-kilo-watt generator.

Two disc-shaped heat diffusers, mounted at the bottom of the assembly in the shadow of the mirror, cool the generator and condense the used steam from the turbine. The entire power package revolves around a common axis, developing sufficient centrifugal force to trickle the steam and coolant slowly toward the outer rims of the discs. On the way they transfer their heat to cold outer space and the steam reverts to water. From the rims, both are pumped back into closed plumbing systems and used over and over again.

The electric power thus obtained is carried to a propulsion assembly at the rear of the spaceship body. Approximately 1,000 hexagonal shaped propulsion chambers are used, each measuring two inches across. These are clustered together in a honeycomb arrangement to obtain the total thrust needed. This is comparatively lowâ€”on the order of one ten-thousandth of the force of gravity.

In the sterile vacuum of space, however, the sunship will be weightless and frictional drag non-existent, so even the tiniest push can move a mountain’s bulk. Unlike rockets, which would coast through most of their voyage, the sun-ship’s thrust will be employed throughout the trip. During the first half, it is used to accelerate to maximum speed. Then, at the halfway point, the ship is reversed in a 180Â° turn and the thrust, acting in the opposite direction, gradually brakes her to a halt.

Stuhlinger’s spaceship design, capable of carrying ten passengers plus 50 tons of cargo, weighs only 250 tonsâ€”as compared with 1,100 tons for a rocket vessel of similar capacity. Flight time from an earth satellite to one orbiting around Mars would be approximately one year. Even more remarkable savings would result on longer journeys, according to the doctor’s computations. On a two-year flight of some 780,000,000 miles, the sunship would have a takeoff weight of only 275 tons, whereas the rocket job would tip the scales at no less than 7,500. Furthermore, the rocket fuel would have to be laboriously trucked up to the standing satellite at enormous cost. The sunship’s fuel, on the other hand, would be free solar energy picked up as she goes along.

Interested mainly in the problems of power and propulsion, Dr. Stuhlinger makes little mention of crew accommodations. Living quarters would, of course, have to be pressurized, air-conditioned and designed to permit ten people to live comfortably together for a year or more. Individual cabins would be advisable for privacy and large lounging, eating and cooking compartments essential. Other requirements are a library, entertainment center with a good stock of movies, records, etc., an observatory, laboratory and workshop for general repairs. Oxygen would probably be generated by growing water plants in an aquarium and fresh vegetables could be cultivated in soilless chemical vats.

All this indicates a sizable sphere as the most efficient form. It would be armored against cosmic dust, well insulated and divided into decks with the public rooms at mid-level. Long tubular fuselages, projecting fore and aft from the sphere’s center section, would house cargo, power faculties, air-conditioning apparatus, plant cultivation tanks, labs, shops, etc. The propulsion gear might well be concentrated in the aftermost tip. Thus the spaceship would be divided into well-defined cargo, working and living areas.

The crew would of course be carefully screened for ability, character and social compatibility and only the most completely adjusted applicants considered. While many past voyages of discovery, whaling cruises and the like, have kept crews cooped up in less comfortable craft for longer periods, it must be remembered that they could relax on occasional shore visits. The sunship’s complement will be strangers in an alien environment, imprisoned in a tiny artificial world, completely dependent on each other for the very breath of life. In space there are no tropical islands with whispering palms and welcoming native maidens; nothing but unimaginable extremes of heat and cold in an airless ocean that is totally hostile to life. Our crew must therefore be self-sufficient and perfectly integrated, as individuals and as a team. Only by such men and women can space be conquered.

While Dr. Stuhlinger’s design is frankly theoretical, it is based on sound engineering and physical principles. With the rapid advances now being made it is not too unreasonable to hope that some of our younger readers will five to see a cosmic butterfly set off on a cruise through spaceâ€”and perhaps a few of them may even have a hand in building and flying it.