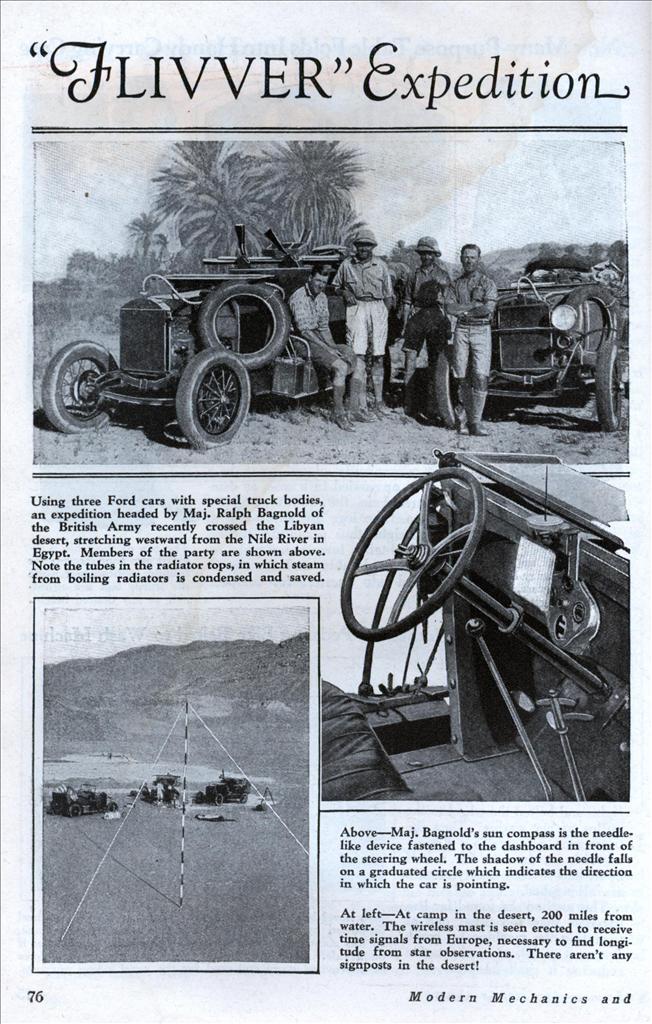 Using three Ford cars with special truck bodies, an expedition headed by Maj. Ralph Bagnold of the British Army recently crossed the Libyan desert, stretching westward from the Nile River in Egypt. Members of the party are shown above. Note the tubes in the radiator tops, in which steam from boiling radiators is condensed and saved.

Above—Maj. Bagnold’s sun compass is the needlelike device fastened to the dashboard in front of the steering wheel. The shadow of the needle falls on a graduated circle which indicates the direction in which the car is pointing.

At left—At camp in the desert, 200 miles from water. The wireless mast is seen erected to receive time signals from Europe, necessary to find longitude from star observations. There aren’t any signposts in the desert!

The above map shows the position of the Libyan desert, stretching westward from the Nile. Maj. Bagnold’s object was to discover the legendary oasis of Zerzura, reported to exist in the unknown fastnesses of the barren lands, but he failed to locate it.

At right—Top photo shows the odolite and wireless receiving set used in determining position in the desert. The lower picture at right shows the method of extricating a car from deep sand. Short lengths of metal troughs provide channels for the rear wheels to run in. Light rope ladders are then stretched ahead, and the car climbs out under its own power.

The desert well of Bir Sheb, on the old Arabian slave route. This remarkable photo presents an impressive picture of the utter desolation and life-lessness of the great desert in the background.