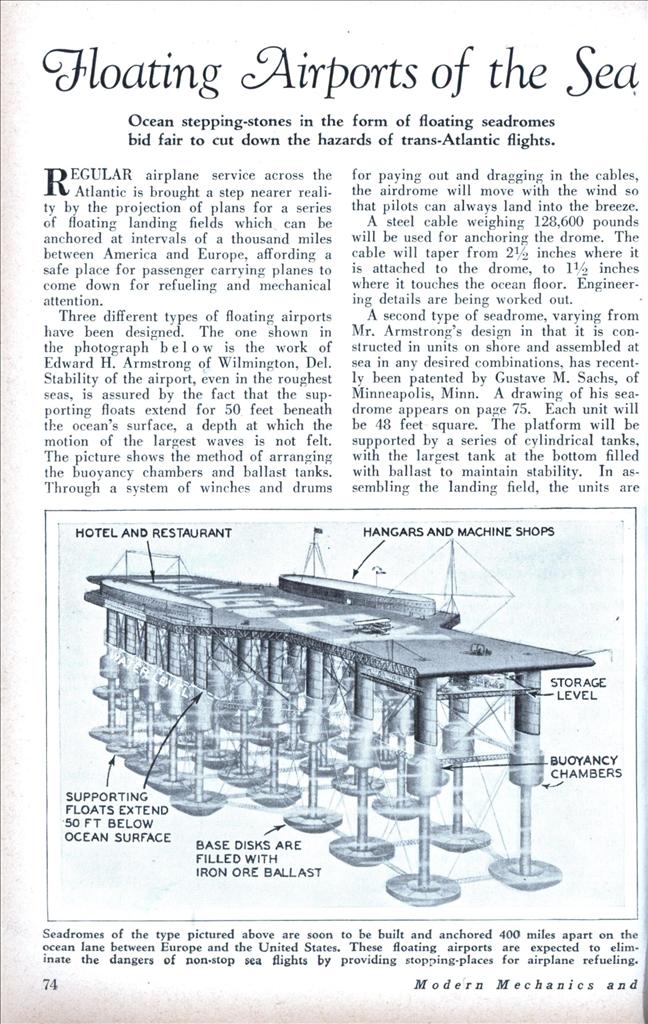 Floating Airports of the Sea

Ocean stepping-stones in the form of floating seadromes bid fair to cut down the hazards of trans-Atlantic flights.

Regular airplane service across the Atlantic is brought a step nearer reality by the projection of plans for a series of floating landing fields which can be anchored at intervals of a thousand miles between America and Europe, affording a safe place for passenger carrying planes to come down for refueling and mechanical attention.

Three different types of floating airports have been designed. The one shown in the photograph below is the work of Edward H. Armstrong of Wilmington, Del. Stability of the airport, even in the roughest seas, is assured by the fact that the supporting floats extend for 50 feet beneath the ocean’s surface, a depth at which the motion of the largest waves is not felt. The picture shows the method of arranging the buoyancy chambers and ballast tanks. Through a system of winches and drums for paying out and dragging in the cables, the airdrome will move with the wind so that pilots can always land into the breeze.

A second type of seadrome, varying from Mr. Armstrong’s design in that it is constructed in units on shore and assembled at sea in any desired combinations, has recently been patented by Gustave M. Sachs, of Minneapolis, Minn. A drawing of his seadrome appears on page 75. Each unit will be 48 feet square. The platform will be supported by a series of cylindrical tanks, with the largest tank at the bottom filled with ballast to maintain stability. In assembling the landing field, the units are secured to one another by means of couplings and steel, cables.

A third type of airport, pictured in the photo below, and also shown on the cover of this month’s Modern Mechanics, is of French design. It resembles a huge floating lighthouse, as the model shows, and is equipped with propellers and driving machinery to move it about as may be required.