Popular Mechanics
Issue: May, 1924
Posted in: Sign of the Times
Tags: lighting, monuments
No Comments on Flood-Lights Revealing Beauties of Night (May, 1924)

Flood-Lights Revealing Beauties of Night (May, 1924) 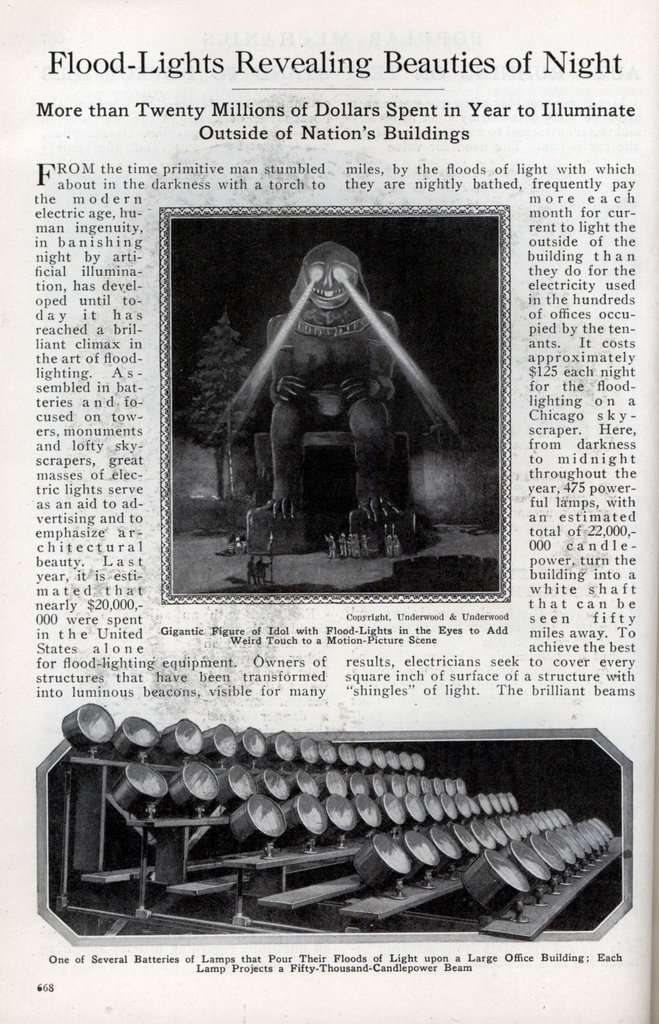 FROM the time primitive man stumbled about in the darkness with a torch to the modern electric age, human ingenuity, in banishing night by artificial illumination, has developed until today it has reached a brilliant climax in the art of floodlighting. Assembled in bat-teries a n d focused on towers, monuments and lofty skyscrapers, great masses of electric lights serve as an aid to advertising and to emphasize architectural beauty. Last year, it is estimated that nearly $20,000,000 were spent in the United States alone for flood-lighting equipment. Owners of structures that have been transformed into luminous beacons, visible for many miles, by the floods of light with which they are nightly bathed, frequently pay more each month for current to light the outside of the building than they do for the electricity used in the hundreds of offices occupied by the tenants. It costs approximately $125 each night for the floodlighting on a Chicago skyscraper. Here, from darkness to midnight throughout the year, 475 powerful lamps, with an estimated total of 22,000,000 candle-power, turn the building into a white shaft that can be seen fifty miles away. To achieve the best results, electricians seek to cover every square inch of surface of a structure with “shingles” of light. The brilliant beams are projected in condensed shafts with a spread of only a few degrees. The shingles, or spots of light, are made to overlap and blend, and the lamps are adjusted so that the maximum illumination, both from the direct rays and from those that rebound from the surface, is utilized. In flooding narrow towers or columns, the method is to surround the object with a field of light rather than direct the rays upon it. Lamps are turned so that the rays shoot upward, surrounding the shaft with a “layer” of light and a luminous background from every angle.

Special flood-lighting equipment has been designed to meet the various problems encountered and improvements are being added constantly. Gas-filled lamps, varying in size from 100 to 500 watts, with highly concentrated filaments, are used on most installations. They are inclosed in steel projectors, similar to automobile headlights, enameled a battleship gray. The lamp is shielded by a heavy wire-glass door. The projector is adjusted to a swivel support so that it can be turned in any direction or angle.

To concentrate the beam, special care is exercised in designing the reflector, which has been so perfected that 330,000 candle-power may be developed from a 500-watt lamp. It is parabolic in shape and consists of a one-piece, mirrored glass, coated with a preparation which will prevent its cracking in the high temperature. The beam usually has a spread ranging from 10 to 25 degrees. For close work, greater diffusion is secured with corrugated reflectors. The lamps are concealed at strategic points on the building or are assembled in batteries, like a park of well-aimed guns.

On the Wrigley building in Chicago, part of the light is projected from a battery of seventy 500-watt lamps on top of a structure across the river and nearly 900 feet away. Permission of the war department was necessary before the lamps could be turned on, as the river is a navigable stream and, therefore, subject to government regulation. Three other batteries, one of eighty-six, another of seventy and a third of ninety 500-watt lamps were placed on a building near by. Nested around the structure, from the twenty-ninth floor of the tower to the sixteenth floor, scores of other lamps of varying size were installed in concealed positions.