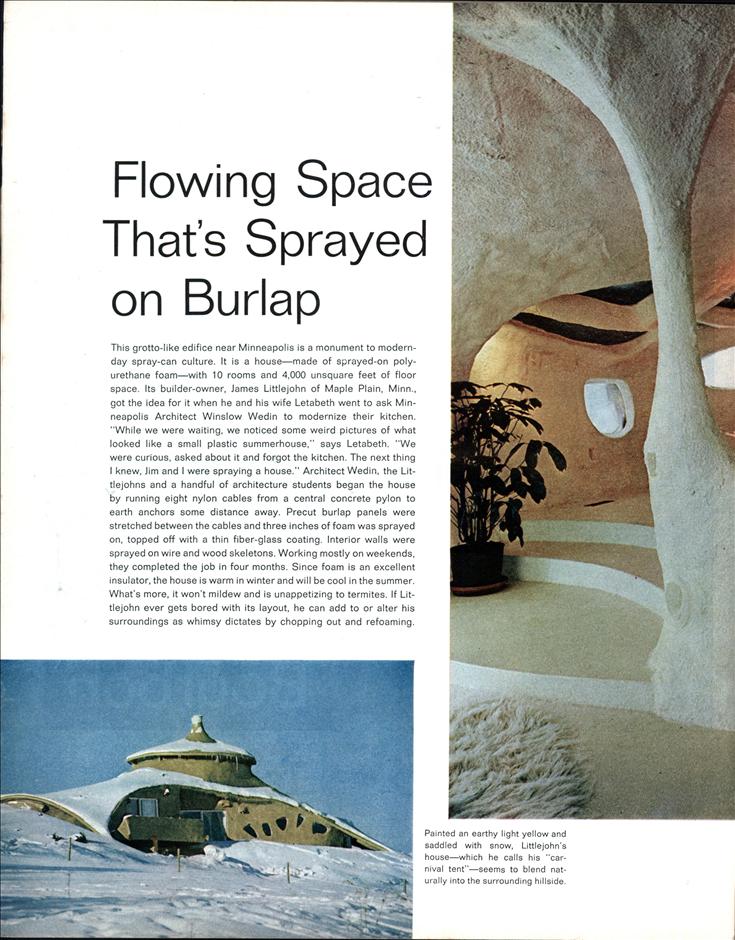 This grotto-like edifice near Minneapolis is a monument to modern-day spray-can culture. It is a house—made of sprayed-on polyurethane foam—with 10 rooms and 4,000 unsquare feet of floor space. Its builder-owner, James Littlejohn of Maple Plain, Minn., got the idea for it when he and his wife Letabeth went to ask Minneapolis Architect Winslow Wedin to modernize their kitchen. “While we were waiting, we noticed some weird pictures of what looked like a small plastic summerhouse,” says Letabeth. “We were curious, asked about it and forgot the kitchen. The next thing I knew, Jim and I were spraying a house.” Architect Wedin, the Littlejohns and a handful of architecture students began the house by running eight nylon cables from a central concrete pylon to earth anchors some distance away. Precut burlap panels were stretched between the cables and three inches of foam was sprayed on, topped off with a thin fiber-glass coating. Interior walls were sprayed on wire and wood skeletons. Working mostly on weekends, they completed the job in four months. Since foam is an excellent insulator, the house is warm in winter and will be cool in the summer. What’s more, it won’t mildew and is unappetizing to termites. If Littlejohn ever gets bored with its layout, he can add to or alter his surroundings as whimsy dictates by chopping out and refoaming.

‘Light and airy and wondrously unpredictable’

Life in a free-form, polyurethane house is bound to have its differences, and Correspondent Joan Downs asked the Littlejohns if she might be the first to sample them. She moved in, briefly, and left with these impressions.

Seeing it piled up there like an Olympian souffle or a giant mushroom with portholes, you know from the first glimpse that it’s anything but an ordinary Minnesota farmhouse. Then, when you step inside, it’s a little like finding yourself in one of those cheap foam ice buckets. Your fingers can’t resist the wall’s blistered white surface and you try to pinch the tiny bubbles. They’re as tough as Indian corn.

But the inside is anything but cheap-looking. It’s light and airy—and wondrously unpredictable. Levels change unexpectedly, both above and below. Wall and ceiling can meet oddly and abruptly, or even, I might add, disastrously if you’re over 5 feet 8.

To one raised in the tradition of flat planes and right angles, being released to this gentle whoosh of ellipse and flowing space is mildly intoxicating. One visitor complained that every time she looked out the window the countryside appeared to be moving, giving her a bad case of mal de Minnesota. But others, especially youngsters, like the sensation of movement and, finding it hard to deny the house’s natural choreography, dance happily wherever they go.

Another delight of this house is to experience its variety of textures, from pebbly walls to deep shag rugs and slicks of concrete. A word of caution, though: don’t sit down too suddenly on the lovely pile-covered foam banquettes; foam is hard.

The appeal of life in a sculpture loses some of its luster late at night when one vainly feels along the wall trying to find which artful bump conceals the light switch. Nor does one envy the lady whose task it is to hang curtains from sloping walls, sweep cobwebs from the 30-foot dome and wipe fingermarks from yards of Plexiglas windows and furnishings.

And one other thing: when going from the master bedroom into the adjoining bathroom, it’s a good idea to proceed with extreme caution—or you’ll fall into the sunken tub.