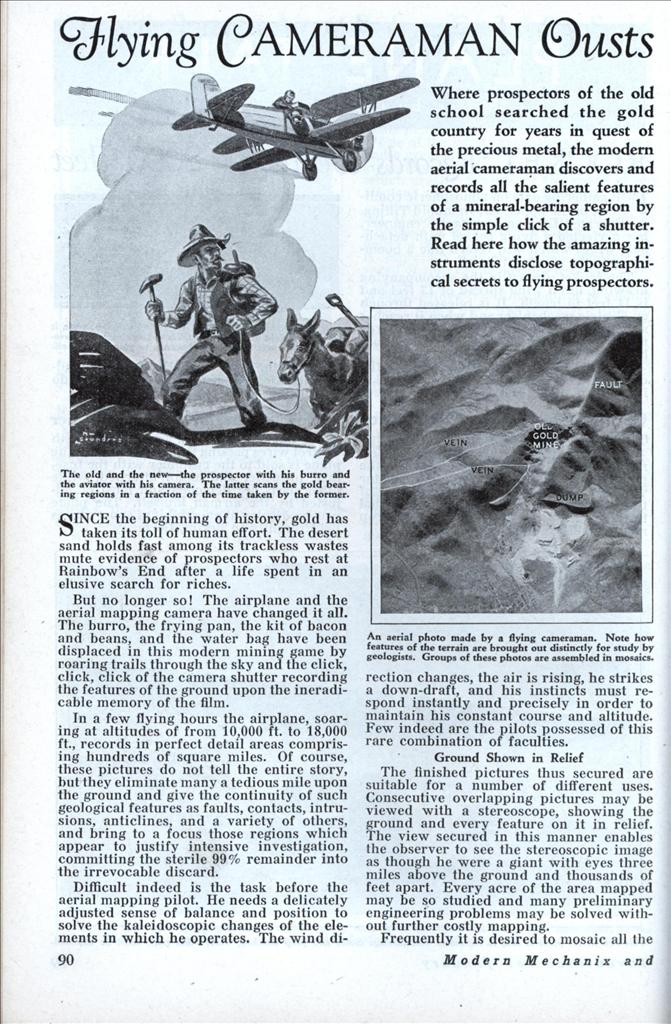 Where prospectors of the old school searched the gold country for years in quest of the precious metal, the modern aerial cameraman discovers and records all the salient features of a mineral-bearing region by the simple click of a shutter. Read here how the amazing instruments disclose topographical secrets to flying prospectors.

SINCE the beginning of history, gold has taken its toll of human effort. The desert sand holds fast among its trackless wastes mute evidence of prospectors who rest at Rainbow’s End after a life spent in an elusive search for riches.

But no longer so! The airplane and the aerial mapping camera have changed it all. The burro, the frying pan, the kit of bacon and beans, and the water bag have been displaced in this modern mining game by roaring trails through the sky and the click, click, click of the camera shutter recording the features of the ground upon the ineradicable memory of the film.

In a few flying hours the airplane, soaring at altitudes of from 10,000 ft. to 18,000 ft., records in perfect detail areas comprising hundreds of square miles. Of course, these pictures do not tell the entire story, but they eliminate many a tedious mile upon the ground and give the continuity of such geological features as faults, contacts, intrusions, anticlines, and a variety of others, and bring to a focus those regions which appear to justify intensive investigation, committing the sterile 99% remainder into the irrevocable discard.

Difficult indeed is the task before the aerial mapping pilot. He needs a delicately adjusted sense of balance and position to solve the kaleidoscopic changes of the elements in which he operates. The wind direction changes, the air is rising, he strikes a down-draft, and his instincts must respond instantly and precisely in order to maintain his constant course and altitude. Few indeed are the pilots possessed of this rare combination of faculties.

Ground Shown in Relief The finished pictures thus secured are suitable for a number of different uses. Consecutive overlapping pictures may be viewed with a stereoscope, showing the ground and every feature on it in relief. The view secured in this manner enables the observer to see the stereoscopic image as though he were a giant with eyes three miles above the ground and thousands of feet apart. Every acre of the area mapped may be so studied and many preliminary engineering problems may be solved without further costly mapping.

Frequently it is desired to mosaic all the pictures which have been secured on the flight together to form a large map showing the relation and continuity of different parts of the area. This may be accomplished by carefully determining the scale of each picture and enlarging or reducing it for differences in elevation and projecting onto tilted easels to compensate for sloping ground, etc.

Perhaps the most amazing result of recent progress in this art is the precise contour map which may be made from pictures. These pictures may be secured on the ground by an instrument called the photo-theodolite or they may be made from the air by the aerial camera. Astounding machines, called the aerocartograph, with almost human qualities, receive these pictures and from them draw a map, depicting faithfully every feature of the ground in its precise location, as well as contour lines from which the most exacting engineering study may be made. Mining engineers can easily locate from this type of map veins, faults and other invaluable guides to modern-day gold mining.

While looking very complicated indeed, these machines are fundamentally simplicity itself. As simple, in fact, as the old-fashioned stereoscope, that almost every family used to own, is the principle upon which the aerocartograph is based. The same basic princi- ples have been employed for more than thirty years in astronomical observatories for measuring distances. Again this fundamental factor, stereoscopic parallax, is used in our laboratories of physics for the measurement of ultra-microscopic electron tracks.