Modern Mechanix
Issue: May, 1929
Posted in: Aviation, History
No Comments on Flying Daredevils of 20 YEARS AGO (May, 1929)

There’s a great Radio Lab segment about Lincoln Beachy you should really listen to. 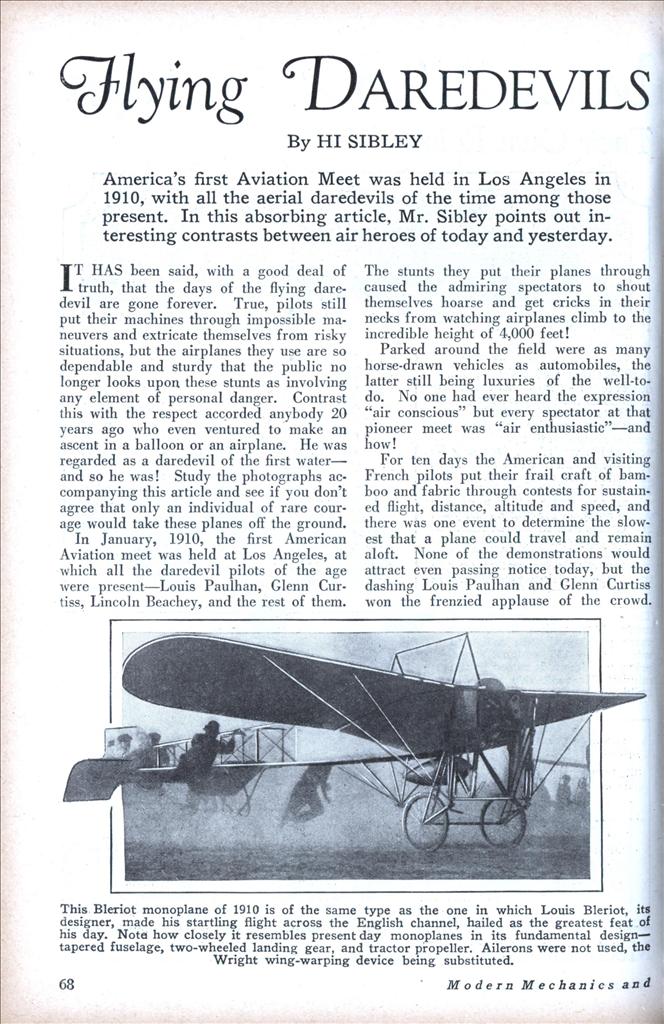 Flying Daredevils of 20 YEARS AGO

America’s first Aviation Meet was held in Los Angeles in 1910, with all the aerial daredevils of the time among those present. In this absorbing article, Mr. Sibley points out interesting contrasts between air heroes of today and yesterday.

IT HAS been said, with a good deal of truth, that the days of the flying daredevil are gone forever. True, pilots still put their machines through impossible maneuvers and extricate themselves from risky situations, but the airplanes they use are so dependable and sturdy that the public no longer looks upon these stunts as involving any element of personal danger. Contrast this with the respect accorded anybody 20 years ago who even ventured to make an ascent in a balloon or an airplane. He was regarded as a daredevil of the first water— and so he was! Study the photographs accompanying this article and see if you don’t agree that only an individual of rare courage would take these planes off the ground.

In January, 1910, the first American Aviation meet was held at Los Angeles, at which all the daredevil pilots of the age were present—Louis Paulhan, Glenn Curtiss, Lincoln Beachey, and the rest of them.

The stunts they put their planes through caused the admiring spectators to shout themselves hoarse and get cricks in their necks from watching airplanes climb to the incredible height of 4,000 feet!

Parked around the field were as many horse-drawn vehicles as automobiles, the latter still being luxuries of the well-to-do. No one had ever heard the expression “air conscious” but every spectator at that pioneer meet was “air enthusiastic”—and how!

For ten days the American and visiting French pilots put their frail craft of bamboo and fabric through contests for sustained flight, distance, altitude and speed, and there was one event to determine the slowest that a plane could travel and remain aloft. None of the demonstrations would attract even passing notice today, but the dashing Louis Paulhan and Glenn Curtiss won the frenzied applause of the crowd.

A comparison of those first achievements with the records of today shows the amazing progress made in less than two decades, and we have hardly begun! In fact, one hesitates to set down today’s high marks because long before this article can possibly get into print, new records may have been made far surpassing the present figures.

The highest speed attained at that first meet was 55 miles an hour. This was by Curtiss, for a short spurt only, and he carried one passenger. Alongside today’s record of 318.57 m.p.h., this seems sluggish indeed. Paulhan’s altitude record was 4,165 feet as against 38,474 feet—seven and a half miles! In sustained flight Paulhan soared around above the field for slightly less than two hours, covering 75.77 miles, being forced down by a gasoline leak. Delprete and Pinedo remained in the air 58 hours, 34 minutes, and the former with Ferrarin made 4,417 miles in a single hop from Italy to Brazil. Sixty-six feet per minute—-not per second—was then a record for climbing, made by C. K. Hamilton in a Curtiss biplane.

The greatest sensation of the meet was Paulhan’s cross country flight of 45-1/4 miles, reported by Prof. H. La V. Twining in Aeronautics Magazine: “… the greatest event of the week, arousing enthusiasm admixed with awe that eclipsed that of the day of his high flight. It was wonderful to see him gradually growing smaller and smaller and finally disappear against the white of snow on the background of mountains. His return was equally awesome from the time he was a tiny dot, high in the air above the mountains, till the’ moment of his landing. His greatest height was 1,968 feet; elapsed time 1 hr., 2 min. 42-4/5 sec. Engine behaved well. Paulhan viewed the country as he flew, using field glasses.”

It was characteristic of the period that altitude was referred to as “height” and sustained flight as “endurance contest.” The term “ceiling” had not yet been adopted in flying circles.

One of the first experiments in dropping bombs was made by an officer of the U. S. Signal Corps flying with Paulhan at an altitude of 250 feet. The target was a 20-foot square marked out on the ground, but the nearest hit was 66 feet outside the line, owing to the officer’s miscalculation of the plane’s speed. Roy Knabenshue had better success in dropping the dummy bombs from a dirigible, but his speed was only about 16 m.p.h., and altitude 60 feet. “The lesson gained at this low altitude,” observed an astute reporter, “is problematical.”

The dirigibles were indeed in a primitive stage, consisting of a small cigar-shaped balloon about 60 feet long by 18 feet in diameter, with a light triangular-section frame work suspended beneath to carry motor and pilot. The engine was a tiny two- cylinder motorcycle type, and the pilot was obliged to scamper back and forth on the skeleton framework to maneuver the nose up or down. In a “hotly contested race,” of one lap around the 1.61 mile course Lincoln Beachey won from Knabenshue at slightly over 19 m.p.h.

At the time of the Aviation Meet, and for five years thereafter, Lincoln Beachey was undoubtedly the premier acrobatic flyer of the world. Only a year after his victory in the dirigible race, Beachey flew an airplane over Niagara Falls, under the suspension bridge connecting the United States with Canada.

He once suggested to a group of pilots, eager for some new stunt to break the ennui of straightaway flying, that they all rise to a height of 5,000 feet and nose over in a steep dive for the earth. The one who was closest to the earth before he leveled off his plane would be adjudged the winner. Nobody wanted to take up Beachey’s suggestion, however. Beachey was at the height of his fame when an untimely loop over San Francisco bay, in full view of thousands of spectators of the 1915 Panama-Pacific Exposition, resulted in his death when his plane collapsed and drowned him in the waters of the bay.

Many of the features of those planes which made the best showing are now obsolete, and singularly the trim little Bleriot, whose behavior was disappointing throughout the meet, embodied a design which in general survives in the best monoplane types of today. Both Curtiss and Farman biplanes were pushers; the elevators were in front and the pilot and passenger sat out on the front edge of the lower wing, exposed to the elements.

The Bleriot, on the other hand—the same model which had been first to cross the English channel six months before—was very much like modern monoplanes in appearance and principle. It had the two-wheel landing gear equipped with shock-absorbers, tail skid, a tapered—though only partially covered—fuselage, and a cockpit for the pilot. The wing design, stabilizer, elevators, vertical fin and rudder were much the same as modern practice. More significant, it was a tractor with a radial, air-cooled motor in the nose.

In justice to the Bleriot it must be said that its poor showing was largely due to restrictions, through a suit by Wright brothers, on the use of its wing-warping device. Most of the other planes were equipped with ailerons of one design or another.

Years have passed swiftly since that first American air meet, bringing with them such amazing achievements as those of Lindbergh, Byrd, Chamberlin, Amundsen, Wilkins. Eckener, Kingrsford-Smith and a score of others, and yet it is doubtful if any subsequent feat has ever inspired the indescribable sensation that comes with seeing, for the first time, a man and a machine high in the air.