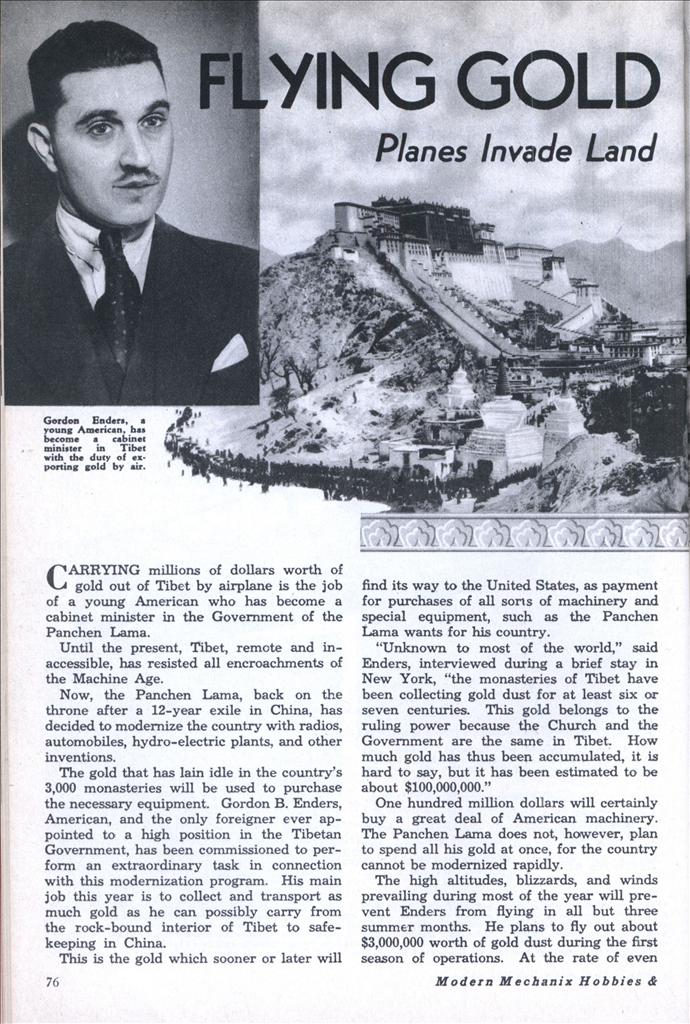 Flying Gold Out of Tibet

Planes Invade Land of the Lamas CARRYING millions of dollars worth of gold out of Tibet by airplane is the job of a young American who has become a cabinet minister in the Government of the Panchen Lama.

Until the present, Tibet, remote and inaccessible, has resisted all encroachments of the Machine Age.

Now, the Panchen Lama, back on the throne after a 12-year exile in China, has decided to modernize the country with radios, automobiles, hydro-electric plants, and other inventions.

The gold that has lain idle in the country’s 3,000 monasteries will be used to purchase the necessary equipment. Gordon B. Enders, American, and the only foreigner ever appointed to a high position in the Tibetan Government, has been commissioned to perform an extraordinary task in connection with this modernization program. His main job this year is to collect and transport as much gold as he can possibly carry from the rock-bound interior of Tibet to safekeeping in China.

This is the gold which sooner or later will find its way to the United States, as payment for purchases of all sorts of machinery and special equipment, such as the Panchen Lama wants for his country.

“Unknown to most of the world,” said Enders, interviewed during a brief stay in New York, “the monasteries of Tibet have been collecting gold dust for at least six or seven centuries. This gold belongs to the ruling power because the Church and the Government are the same in Tibet. How much gold has thus been accumulated, it is hard to say, but it has been estimated to be about $100,000,000.”

One hundred million dollars will certainly buy a great deal of American machinery. The Panchen Lama does not, however, plan to spend all his gold at once, for the country cannot be modernized rapidly.

The high altitudes, blizzards, and winds prevailing during most of the year will prevent Enders from flying in all but three summer months. He plans to fly out about $3,000,000 worth of gold dust during the first season of operations. At the rate of even $3,000,000 per flying season, Enders will have his hands full for some years to come.

The first commercial shipment of radios and automobiles ever to enter the Forbidden Land recently accompanied the Panchen Lama on his triumphal entry into Tibet, with a great caravan of priests, pilgrims, and pack animals. The automobiles and radios were knocked down and loaded on the backs of animals. They were purchased for the Panchen Lama by Enders.

China claims sovereignty over Tibet, and she has built a new capital for the Panchen Lama at a place called Kokonor, overlooking a great salt lake perched at an altitude of 10,600 feet, and having a circumference of 230 miles. Surrounded by a trained garrison of 3,000 men, the Panchen Lama rules over 3,000,000 people scattered over an area of about 500,000 square miles.

From the capital at Kokonor it is 180 miles to the Lufthansa Air Terminal at Lanchowfu, in Kansuh Province, China. The German all-metal planes make trips to the outside world twice each week.

But reaching the Lufthansa station will not be so easy as it appears, for the Tibetan capital is separated from it by a range of blizzard-swept, snow-covered mountains in which the lowest pass is 16,000 feet.

Enders’ first task on reaching Tibet, he said, would be to survey all the possible airplane landing sites. He must also prepare maps of various regions which are still practically unknown. The existing maps of Tibet are at best only approximations of the actual conditions.

Enders’ choice is American flying equipment for the gold collection work. He has two low-wing cabin monoplanes for the first year’s operations. Each ship can carry a 1,500-pound payload at a 25,000-foot ceiling. With special fuel tanks, it can remain in the air for 16 to 20 hours at a time.

One ship is intended solely for carrying fuel between Tibet and the railheads in either China or India. The British Indian railhead is 200 miles from Tashilhunpo, the religious capital of Tibet. On the Chinese side, the nearest railhead is Taiyuanfu, 600 miles from the Tibetan border and 1,200 miles from the political capital at Kokonor.

Practically all the required gasoline supplies in the land of the lama are brought in by the most laborious methods. Gas cans are transported either on the backs of coolies or the backs of beasts. The cost is proportionately high, so high in fact, that for the present only the Panchen Lama and a few high government officials can afford to buy the fuel.

While one of Enders’ planes is transporting gas from the nearest outside supply depots, the other plane, commanded by Enders himself, is flying from monastery to monastery and picking up bags of gold for export to the outside world.

The roadless condition of the Forbidden Land makes it almost impossible to employ any other safe form of transport. The airplane finds its own road in the sky. ‘ Another good reason for employing the airplane is that it can successfully evade roving bands of robbers.

“One of the odd beliefs in Tibet is that gold is a plant,” said Enders, “and the natives often bury nuggets in the ground, just as any farmer buries a seed.” Within the country itself, gold has little real value. The Panchen Lama has declared that it is “worth nothing, for you cannot eat it. It is only good for what it can buy.” Hence his decision to export quantities of gold to the outside world, where it is highly esteemed.

The Tibetan monasteries are financial institutions and commercial markets, in addition to temples of worship. They lend money to the people at the rate of 2 per cent per month. In this way the wealth of the government has increased over a long period of years, and today the Panchen Lama finds * himself in a position to do business with his white neighbors.

Gold is not the only real wealth in Tibet. The monasteries have salvaged considerable collections of semi-precious stones such as lapis lazuli, sapphires, garnets, aqua-marines, topazes and moonstones.

One of the Panchen Lama’s earliest importations will be American road-building machinery. He plans to construct and to patrol modern highways that will bear commercial traffic between his country and the commercial centers of neighboring lands. He will work through an American syndicate, which will be empowered to do all the buying and selling for the Government.

After years of acquaintance with American methods and machinery in China, the Panchen Lama holds them in the highest esteem, and for that reason he has decided to modernize with American equipment exclusively. But he does not plan to open the country generally to foreigners. Tibet will remain for the Tibetans.

There are other natural resources which might be exploited. There is a possibility of finding oil. Modern machinery will certainly increase the production of semi-precious gems and gold. All mining is now done by hand. There is a great future for air transport in the Forbidden Land.

So far as invention is concerned, Tibet is one place that the machine age forgot. No nation in the world is so little touched by modern appliances and methods. Enders, after four years of travel in the country, recalls seeing only one machine, and that was a water wheel used to turn a prayer wheel during religious services.