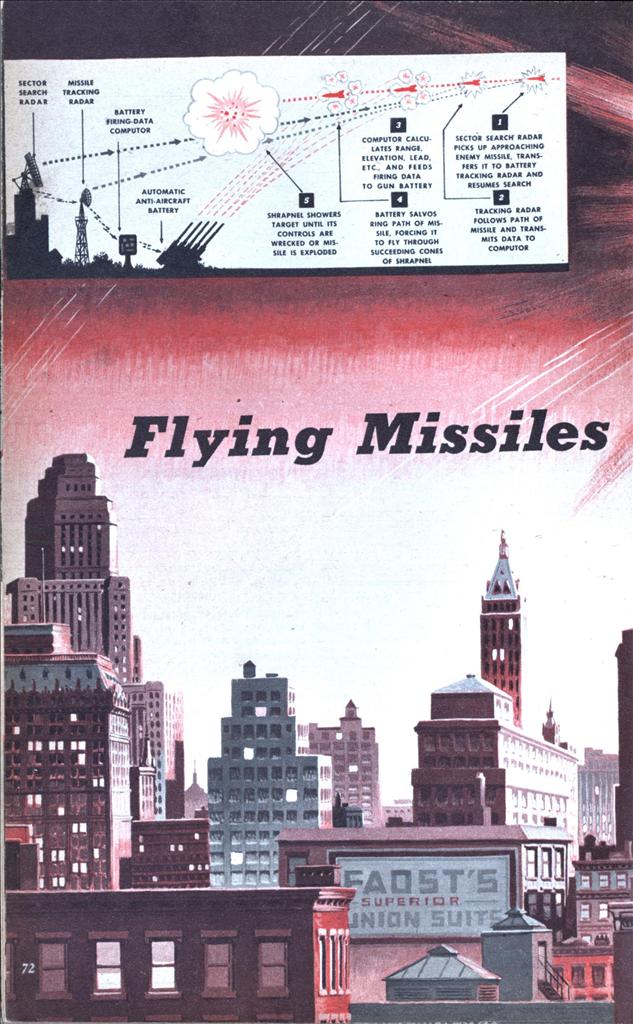 Today our military experts are still searching frantically for a weapon to kill the terrible menace of the V-2 type missile. Rocket specialists are concentrating on ground-to-air projectiles to intercept and destroy enemy rockets. But the experts admit that practical development of mechanical minute-men is years away. Right now, we are as wide open as a blind, broken-armed boxer— with still no defense against the knockout punch of the flying missile.

But even with the old ack-ack guns of World War II, high-flying supersonic missiles can be stopped. Here’s how we could set up a sure- fire anti-missile system this very moment: An enemy wants to blitz a key target— such as New York. Unlike wartime London, with rocket-launching sites just across the narrow English Channel, New York would be vulnerable only to long-range missiles— from another continent or—more probably—from rocket-firing subs off the coast.

Search radars—girding New York by ship and by high points from the outer tip of Long Island through northern Connecticut and the Catskills, then south and east around New Jersey—would warn of the attack and track the oncoming missiles. The nearest radar ship or station flashes by telemeter the exact bearing and position of each missile to the closest ack-ack batteries.

A central electronic brain controls the distribution of targets among the guns. Radars attached to every battery track the assigned target and keep close tab on the missile’s precise speed and trajectory. Instantaneous battery computors figure the lead, wind allowance and time of the shells to intercept the rocket. Then, based on these calculations, the guns point and fire the instant the target comes in range. As each salvo roars out to ring a missile, the computors pick a new aiming point for the guns and set ’em up for the next blast.

Proximity fuses explode the anti-missile shells when they’re within lethal range of the target. When the shells go off, hardened steel balls hurl forward in overlapping cones so that the blasting projectiles form a circular, shotgun pattern, densest in the center. This deadly shrapnel wrecks the missile’s delicate mechanisms, throws it out of control or explodes it in midair.

Basis for this anti-guided missile setup is the recently revealed plan General Sir Frederick Pile, chief of Britain’s antiaircraft defenses during the war, developed in the hope of combatting the V-2.

Pile’s ingenious plan won the approval of Britain’s War Ministry in March. 1945, and might have checked the V-2 campaign. Before he could set up his system, however, the invading Allies overran the Nazis’ launching areas in France and Holland and cleaned out the V-2 bases. The plan then was buried away with other top secrets in the British war office.

To prevent surprise atomic attacks, defense rings could be maintained around every important target area in the United States. The cost in money, time and effort, of course, would be huge—but not so staggering as the destruction and panic that may hit our vital centers if they remain sitting ducks for rocket attacks. So, till our missile men finally do perfect those long-range counter-rockets, it’s comforting to know that we can stop flying missiles—with the equipment we have on hand today.