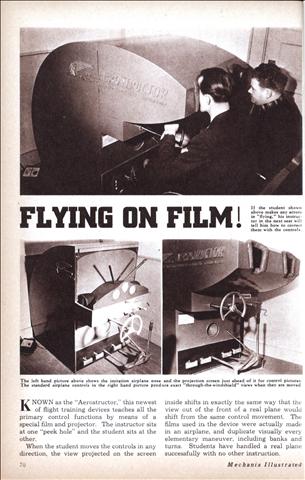 KNOWN as the “Aerostructor,” this newest of flight training devices teaches all the primary control functions by means of a special film and projector. The instructor sits at one “peek hole” and the student sits at the other.

When the student moves the controls in any direction, the view projected on the screen inside shifts in exactly the same way that the view out of the front of a real plane would shift from the same control movement. The films used in. the device were actually made in an airplane, and duplicate visually every elementary maneuver, including banks and turns. Students have handled a real plane successfully with no other instruction.