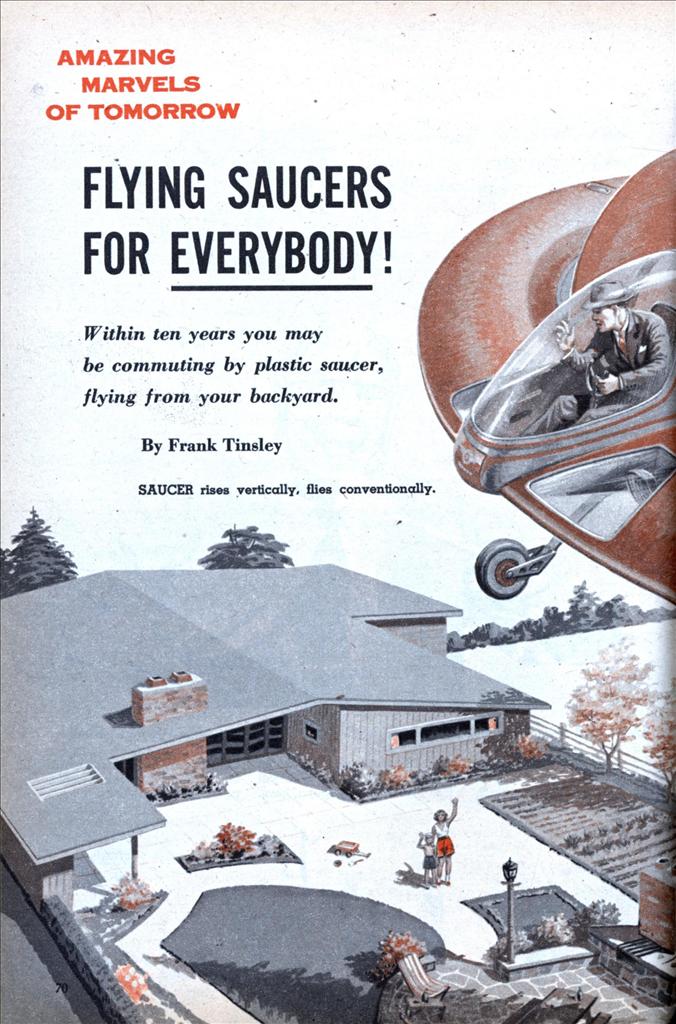 FLYING SAUCERS FOR EVERYBODY!

Within ten years you may be commuting by plastic saucer, flying from your backyard.

IT IS a bright morning in 1965. At precisely eight a. m. Joe Lees emerges from the back door of his lakeside cottage, only 75 miles from his job in the city. In the graveled center of his backyard his jaunty new plastic saucer rests lightly on three tiny balloon tires.

Greeting his neighbor who rides with him, Joe lifts a flush flap in the saucer’s rounded nose. He turns a recessed locking handle and throws back the bubble-like windshield. Spring loaded, like the hoods of today’s cars, the enclosure lifts easily. As it does, the interlinked nose cone swings down to form a handy step.

Joe’s neighbor steps up over the low instrument pedestal and then across the folded pilot’s seat to his perch in the rear. Joe follows, slams the windshield shut and turns the starter key. The two men fasten their safety belts as the engine comes to life.

As the fan-like inductor begins whirling with a high-pitched whine, the automatic servo-flaps pop open and a torrent of air is drawn inward over the circular wings. Faster and faster it flows, building up the lift pattern of a racing, fixed-wing take-off. For a moment, the trembling saucer remains stationary. Then, slowly and smoothly, it rises vertically into the air like an elevator ascending an unseen shaft.

At 450 feet per minute, the saucer climbs to the southbound traffic lane and the engine’s pulsing torque is shifted to the pusher propeller at the machine’s tail. As the prop takes hold, the inductor fan gradually slows to a halt and the servo-flaps clamp shut. Functioning now as a fixed-wing airplane, our saucer banks around and heads south at a comfortable 165 mph cruising speed.

As it tools toward the city, other saucers join the parade and there is a thick stream of aerial traffic. Soon, the downtown towers of the metropolis loom on the horizon and a whole complex of distant traffic lanes converge from the four corners of suburbia. Over the business district, Joe turns out of the main stream and heads for the company’s building. He throttles back his prop, shifts to the air inductor again and slowly descends to the landing pad. It is now 8:30 a.m. The 75-mile flight took only 30 minutes.

Mi’s saucer was conceived by Peter Nofi, an officer in the Merchant Marine. Nofi, a dedicated student of aerodynamics, has combined the downward jet thrust of the ducted-fan with the proven principle of the high-lift air-foil We know that the fan will work because using it, men and machines have been lifted bodily into the air by the modest power of outboard engines.

Nofi’s arrangement is inherently simple. He has merely taken the straight airplane wing and pulled the ends around to form a circle with the leading edge facing out. In the center hole of this doughnut-shaped airfoil, he has mounted a ducted-fan which sucks a high-speed airflow in over the wing and, in the form of a compressed air jet, blows it out through the bottom of the hole.

The other unique feature of Nofi’s saucer is the pair of semi-circular servo-flaps hinged to the top of the wing root on either side of the fuselage. These open automatically to permit inward airflow when the ducted fan is operating, then close to form the top curve’ of a large fore-and-aft airfoil when the machine is in forward flight as a fixed-wing airplane.

A twin control system is employed to provide for the differing conditions of vertical and forward flight. For vertical take-off and landing, compressed air from the inductor is piped to the aileron and flipper areas and expelled through differentially operated jet nozzles. These are built into the conventional control surfaces used in forward flight and are operated by the same wheel column.

In line with his low cost philosophy, Nofi plans to have the top and bottom surfaces of his saucer stamped out on a press, using a plastic material reinforced by glass “flock.” This technique, now successfully employed by small boat builders, will also be used on the servo-flaps, fuselage and other components. Cemented together with the internal gas tank spar, plumbing, etc., in place, the hollow wing will then be filled with a foamed plastic compound which cures into a rigid, air-filled sponge. This replaces expensive interior structure and converts the wing into an unsinkable life-ring for emergency water landings.

Mass produced, the plastic saucer should cost no more than today’s medium-priced cars. Could be that by 1965 you’ll have one flying out of your backyard, too!