Has anyone ever made a plane with a cycloidal propeller that actually flies? 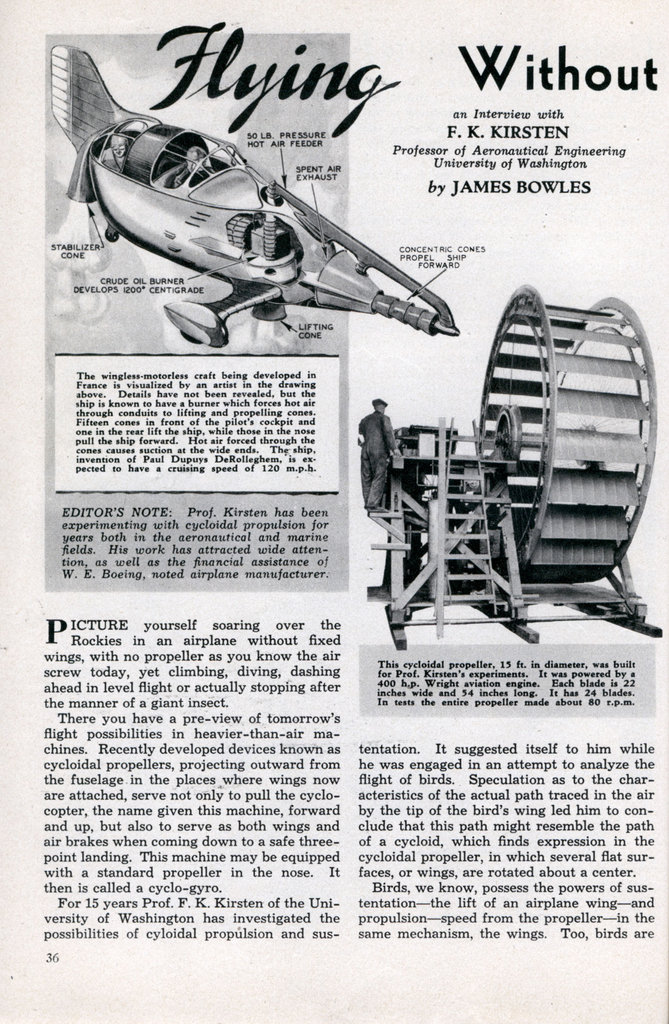 Flying Without Wings or Motors

Airplane design faces radical change. Prof. Kirsten’s cycloidal propeller is ready to emerge from the experimental stage into a safe, wingless craft. In Europe ships are being developed eliminating not only wings, but motors also.

an Interview with F. K. KIRSTEN
Professor of Aeronautical Engineering University of Washington

PICTURE yourself soaring over the Rockies in an airplane without fixed wings, with no propeller as you know the air screw today, yet climbing, diving, dashing ahead in level flight or actually stopping after the manner of a giant insect.

There you have a pre-view of tomorrow’s flight possibilities in heavier-than-air machines. Recently developed devices known as cycloidal propellers, projecting outward from the fuselage in the places where wings now are attached, serve not only to pull the cyclo-copter, the name given this machine, forward and up, but also to serve as both wings and air brakes when coming down to a safe three-point landing. This machine may be equipped with a standard propeller in the nose. It then is called a cyclo-gyro.

For 15 years Prof. F. K. Kirsten of the University of Washington has investigated the possibilities of cyloidal propulsion and sustentation. It suggested itself to him while he was engaged in an attempt to analyze the flight of birds. Speculation as to the characteristics of the actual path traced in the air by the tip of the bird’s wing led him to conclude that this path might resemble the path of a cycloid, which finds expression in the cycloidal propeller, in which several flat surfaces, or wings, are rotated about a center.

Birds, we know, possess the powers of sus-tentationâ€”the lift of an airplane wingâ€”and propulsionâ€”speed from the propellerâ€”in the same mechanism, the wings. Too, birds are far more versatile than airplanes in their ability to take off and land and to engage in rapid flight.

Here is another important point, which in the past has not been even remotely approached in fixed-wing airplanes; birds have neither rudder nor ailerons, although they do possess a horizontal stabilizing fin in the form of tails. They accomplish every manner of control, including pitch, roll and yaw so familiar to airplane pilots, by moving the wing system.

“Thus the new cyclo-copter,” Professor Kirsten told me, “with which we are now experimenting at the Guggenheim Aeronautical Laboratory, University of Washington, possesses a rotating wing-propeller system as in birds and gives us the advantages of free flight enjoyed by those inhabitants of the air.

“It’s interconnected plane surfaces, representing a bird wing, by their interrelated motions as they revolve, react upon the air in such a way as to derive effects of lift and propulsion quite like those achieved by a bird’s wings.

Blades of the cycloidal propeller on this astounding new craft are so arranged mechanically that each makes a half turn for every revolution of the entire propeller. In level flight, for instance, the blade at the bottom of the circle stands on edge, presenting a flat surface to the air stream. This enables it to deliver maximum thrust in pushing the machine forward. If that blade is moving backward at a rate of 100 miles an hour, the top blade, which is now lying horizontal in the air stream, is moving forward 200 miles an hour with respect to the airâ€”speed of the propeller blades on their orbit plus the speed of the machine which supports it. This gives the top blades four times as great a lift per unit area than for a fixed wing. Together, these tiny wings operate with superior efficiency in propulsions and furnish the required lift at the same time.

“It will not be necessary to fit these machines with propellers,” Professor Kirsten told me, over the whir of the air-screw spinning on the model. “Experiments indicate the rotors alone will give them positive control, greater stability than theretofore has been possible, and an ability to land almost vertically even should the power plant fail.” The cyclo-gyro model already built represents a one-sixth scale replicum of a 10-passenger transport plane. Later a full-size craft will be constructed. An entirely new flying technique will be used by pilots.

“Since it does not employ a rudder, the pilot merely turns the wheel right and left for turns and banks, moves it forward and backward to glide or climb,” stated Prof. Kirsten.

“When he turns the wheel left, for instance, control wires cause the angles of the blades in the propellers to be changed in opposite directions, raising the right side and lowering the left. Meantime the tail propellers serve to align the body of the machine in straight flight. Such is the accuracy and positiveness of control that a stabilizing vertical fin becomes unnecessary.

“Merely by turning a small wheel the pilot can change the thrust on the blades, now driving forward in level flight, again hovering over a single spot like a bird.”

“By making adequate changes in the propeller system to achieve high pitch,” said Prof. Kirsten, “there seems to be no limit to speed attainable. I am sure we can reach speeds and altitudes exceeding those so far attained by fixed-wing airplanes, at the same time retaining the safety and controllability so necessary at low speeds. Whereas the airliner of today lands at a speed exceeding in most cases a mile a minute, the cycloidal craft may be brought to earth with little if any forward momentum, much as the autogyro lands.

“Too, the cycloidal machine promises valuable military possibilities. Most of the noise of present airplanes comes from rhythmic impulses imparted by propellers to the air. The frequency of the sound made by the cycloidal propeller is too low to be heard. The cycloidal machine may hover over an enemy, silent as the night, while observers take note of movements on the ground. Its mission accomplished, it can speed away to safety faster than any airplanes yet constructed.

“Further, for fighting purposes, since the vision from the pilot’s cockpit is unobstructed by wings, due to the rapid motion of the cycloidal propellers, and since there is no propeller in front of the cockpit to interfere, machine guns of adjustable sweep may be installed.”