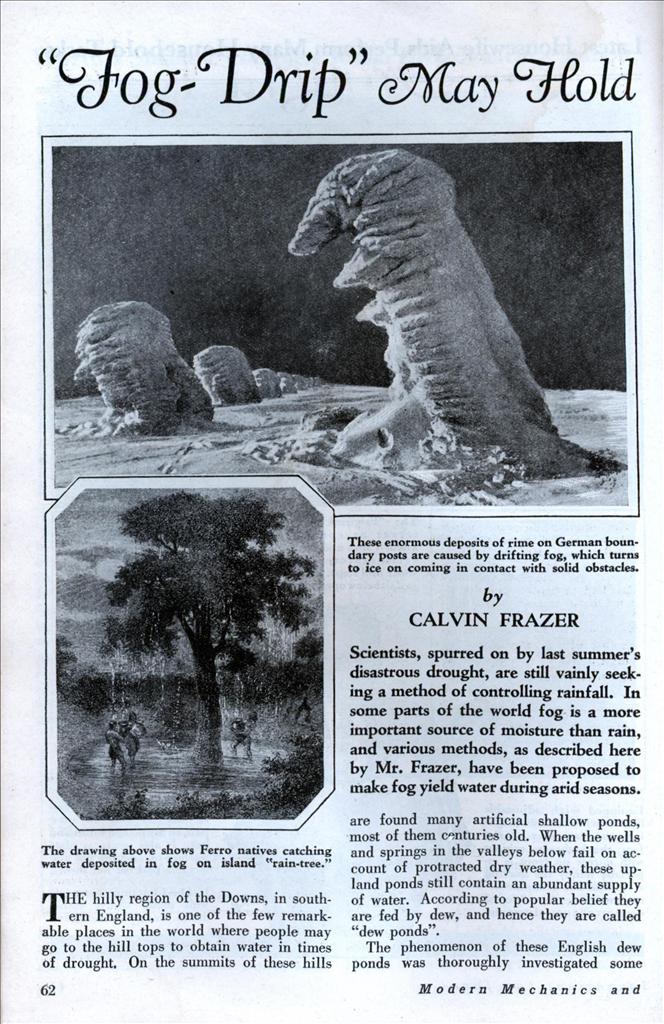 Scientists, spurred on by last summer’s disastrous drought, are still vainly seeking a method of controlling rainfall. In some parts of the world fog is a more important source of moisture than rain, and various methods, as described here by Mr. Frazer, have been proposed to make fog yield water during arid seasons.

THE hilly region of the Downs, in southern England, is one of the few remarkable places in the world where people may go to the hill tops to obtain water in times of drought. On the summits of these hills are found many artificial shallow ponds, most of them centuries old. When the wells and springs in the valleys below fail on account of protracted dry weather, these upland ponds still contain an abundant supply of water. According to popular belief they are fed by dew, and hence they are called “dew ponds”.

The phenomenon of these English dew ponds was thoroughly investigated some years ago by E. A. Martin, with the aid of a special grant from the Royal Society of London. He found by actual measurements that the water in the ponds does not grow cold enough during summer nights to condense moisture from the atmosphere upon its surface, after the manner of leaves and other solid objects on which dew forms. Hence the ponds are not fed by dew.

As rainfall increases with altitude, they doubtless receive a good deal more rain than the valleys adjacent, but regardless of this source of water they get an ample supply at all times from the dense fogs that drift in, especially in the early mornings, from the English Channel near by. The water in these fogs is caught by trees and shrubbery and drains into the ponds.

The bottom of these ponds consists of a layer of puddled chalk or clay which is impervious to water, so that there is no loss by seepage. In most of the ponds this watertight bottom is covered with a layer of broken stone, serving as a protection from the trampling of sheep and cattle, which come to these ponds to drink.

The process by which the dew ponds obtain their water is known to science as “fog-drip”, and is of considerable practical importance in certain other parts of the world. Thus, during the almost rainless summers of southern California the fog that rolls in daily from the Pacific affords plenty of moisture for growing a big crop of beans and other products along the coast. As much as 0.05 inch of water—equivalent to a moderate shower of rain—has been deposited from a California fog during a single night. On the coast of Peru, where the rainfall is negligible at all seasons, plants grow luxuriously during several months of the year, moistened only by the “garua”, the celebrated drizzly fog of that region.

There have been many schemes for collecting fog-drip on a large scale for purposes of irrigation, but none appear to be practicable. A scheme of this sort was submitted to the Weather Bureau during the severe drought of last summer by residents of Bismarck, North Dakota, who planned to construct an experimental dew pond on one of the hills back of that city. The promoters of this project received no encouragement from Uncle Sam’s meteorologists, who explained that the successful operation of the ponds in southern England depends upon local climatic conditions entirely different from those prevailing in the Dakotas. Fogs are rare in North Dakota, records for Bismarck showing only about four or five a year.

Inventors in California once proposed to set up a tall screen of wire netting to catch fog near the coast and to store the water in reservoirs, from which it could be piped to adjacent farmlands. This beautiful plan was knocked in the head by a cold-blooded meteorologist, Dr. W. J. Humphreys, of the Weather Bureau. Humphreys showed that a screen 250 feet high—the cost of which would doubtless be prohibitive—would provide irrigation water for a strip of land only about half a mile wide back of it. However, the scheme may still have possibilities, and inventors are continuing their investigations of the odd phenomena in various parts of the world. Their findings have proved interesting.

On the summit of Green Mountain, in the Island of Ascension, there is a small artificial pool, surrounded by a bamboo thicket, and known as the “Dew Pond.” It was constructed, in imitation of the English ponds, for the purpose of catching water from the trade-wind clouds that constantly drift over this mountain, and it serves as a watering place for cattle. Water is scarce in Ascension, which has no springs and a very scanty rainfall.

Fog-drip also explains the legend of the rain tree”. This famous tree, described by many early voyagers, is said to have grown in the island of Ferro, one of the Canaries, and to have supplied water for all the needs of the islanders. Fog condensed on the tree and drained into a cistern.