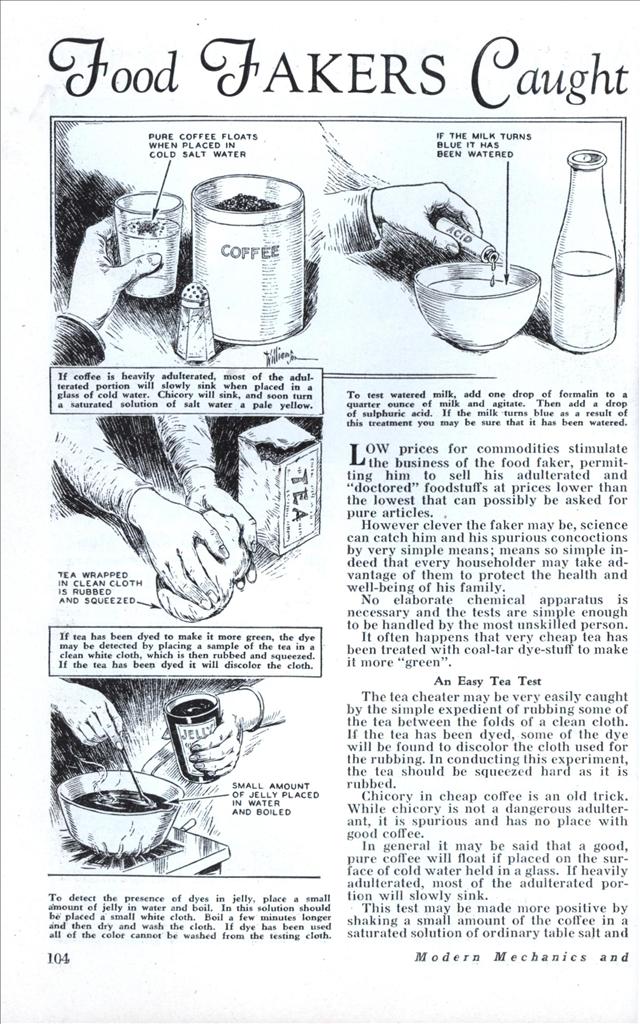 LOW prices for commodities stimulate the business of the food faker, permitting him to sell his adulterated and “doctored” foodstuffs at prices lower than the lowest that can possibly be asked for pure articles.

However clever the faker may be, science can catch him and his spurious concoctions by very simple means; means so simple indeed that every householder may take advantage of them to protect the health and well-being of his family.

No elaborate chemical apparatus is necessary and the tests are simple enough to be handled by the most unskilled person.

It often happens that very cheap tea has been treated with coal-tar dye-stuff to make it more “green”.

The tea cheater may be very easily caught by the simple expedient of rubbing some of the tea between the folds of a clean cloth. If the tea has been dyed, some of the dye will be found to discolor the cloth used for the rubbing. In conducting this experiment, the tea should be squeezed hard as it is rubbed.

Chicory in cheap coffee is an old trick. While chicory is not a dangerous adulterant, it is spurious and has no place with good coffee.

In general it may be said that a good, pure coffee will float if placed on the surface of cold water held in a glass. If heavily adulterated, most of the adulterated portion will slowly sink.

This test may be made more positive by shaking a small amount of the coffee in a saturated solution of ordinary table salt and water. The coffee is pure if nearly all of it floats and the liquid becomes a pale yellow. A saturated solution is prepared by warming the water and dissolving salt in it until the water refuses to take any more.

Not all adulterants are as harmless as chicory. One of the most dangerous ones might be found in pickles. The food faker knows that pickles and the vinegar solution that preserves them, may be made to take on a beautiful green color by the presence of copper. This is done by boiling the pickles in copper kettles.

Nothing more elaborate than an ordinary iron nail is needed to expose this little trick. A small amount of the vinegar is poured out into a cup and an iron nail is placed in it.

This is set away for a day or so and if the pickles contain a dangerous amount of copper, the nail will be found to have been copper-plated in the meantime. If this happens, there is no fit place for the pickles but the garbage can.

A candle and a spoon is all that is needed in the way of equipment for a good butter test. Cheap butter, and sometimes butter that is high priced, is filled with cotton seed grease which, while not harmful, should not be found in butter sold by that name.

A small amount of the butter is placed in a spoon and the spoon is held over a candle flame until the butter boils. If absolutely pure it will boil very quietly. On the other hand, if it contains foreign greasy matter, it will behave very badly and sputter loudly.

Some housewives are tricked into buying jams and jellies because of their pretty colors. This is a dangerous attraction, for it may mean that the articles have been treated with dyes. The alert housewife may use the following simple experiment to determine whether or not she is being victimized in this way.

A small amount of the jelly is placed in water and boiled. Into this solution, a small piece of white cloth is placed. After the cloth has been permitted to boil, it should be dried and washed. If the jelly has been dyed it will be found that all of the color cannot be washed out of the cloth.

When bakers use inferior flour they cover it up by using plenty of alum to rob the flour of its deserving dark color.

Such tricky business may be detected by soaking a piece of the bread made from such flour in ammonia carbonate which may be purchased at the corner drug store.

The watered milk game is an easy one to catch although two simple chemicals will be needed in the experiment. About a quarter ounce of milk is poured into a container. One drop of formalin is added to this and the mixture is then agitated. After this add a drop of sulphuric acid. If the milk turns blue as result of this treatment, it has been watered.

A solution of pure sugar should be absolutely transparent and should not present a foggy appearance. This is the basis of the sugar test.

A small amount of sugar, say three tablespoonfuls, is dissolved in a glass of water. A newspaper is then held up behind the glass so that the observer will have something by which to judge.

Pure ice cream should contain no gelatine or cornstarch. Indeed it is a sad commentary on our business ethics here in America when it is admitted that it is not always possible to buy ice cream without one or both of these adulterants being present.

Those who insist on buying the pure article and who wish to check the honesty of the maker will find the following test a simple and effective one. If a solution of the ice cream is made and a small amount of iodine added, a blue color results after shaking. This indicates the presence of starch.

For gelatine a more complicated test is needed. About two teaspoonfuls of ice cream is dissolved in twice as much water. To this is added two teaspoonfuls of mercuric nitrate. The resulting solution is filtered and added to a solution of picric acid of equal volume. A yellow precipitate discloses the presence of gelatine without any possible doubt.

Benzoic acid or sodium benzoate are two very bad preservatives and any effort spent in disclosing them would be very much worth while. Any food like catsup suspected of containing them should be given the following treatment: First, it should be slightly acidified by adding a little acid of any kind. After this, the resulting mixture is shaken with ether. If left to stand, the ether will come to the surface and evaporate. This should be permitted and the result dissolved in hot water. Then a little ammonia is added, and the excess driven off by heating. This done, a few drops of a one per cent ferric chloride solution is added. A brown precipitate indicates the presence of either benzoic acid or sodium benzoate. A violet color indicates the presence of salicylic acid.