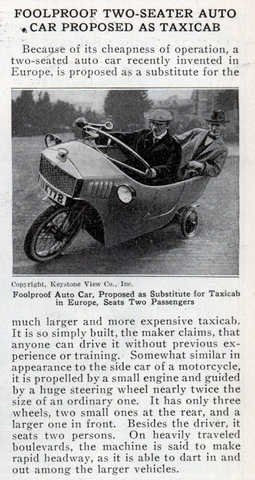 Because of its cheapness of operation, a two-seated auto car recently invented in Europe, is proposed as a substitute for the much larger and more expensive taxicab. It is so simply built, the maker claims, that anyone can drive it without previous experience or training. Somewhat similar in appearance to the side car of a motorcycle, it is propelled by a small engine and guided by a huge steering wheel nearly twice the size of an ordinary one. It has only three wheels, two small ones at the rear, and a larger one in front. Besides the driver, it seats two persons. On heavily traveled boulevards, the machine is said to make rapid headway, as it is able to dart in and out among the larger vehicles.