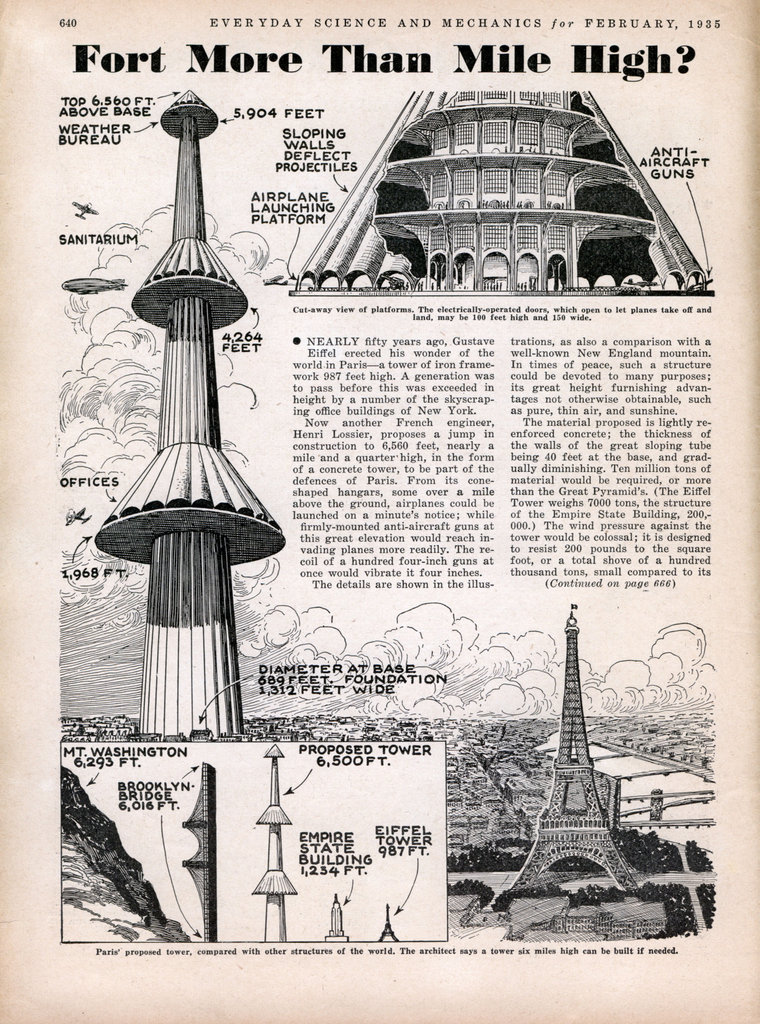 NEARLY fifty years ago, Gustave Eiffel erected his wonder of the world in Parisâ€”a tower of iron framework 987 feet high. A generation was to pass before this was exceeded in height by a number of the skyscrap-ing office buildings of New York.

Now another French engineer, Henri Lossier, proposes a jump in construction to 6,560 feet, nearly a mile and a quarter high, in the form of a concrete tower, to be part of the defences of Paris. From its cone-shaped hangars, some over a mile above the ground, airplanes could be launched on a minute’s notice; while firmly-mounted anti-aircraft guns at this great elevation would reach invading planes more readily. The recoil of a hundred four-inch guns at once would vibrate it four inches. The details are shown in the illustrations, as also a comparison with a well-known New England mountain. In times of peace, such a structure could be devoted to many purposes; its great height furnishing advantages not otherwise obtainable, such as pure, thin air, and sunshine.

The material proposed is lightly re-enforced concrete; the thickness of the walls of the great sloping tube being 40 feet at the base, and gradually diminishing. Ten million tons of material would be required, or more than the Great Pyramid’s. (The Eiffel Tower weighs 7000 tons, the structure of the Empire State Building, 200,-000.) The wind pressure against the tower would be colossal; it is designed to resist 200 pounds to the square foot, or a total shove of a hundred thousand tons, small compared to its weight. In the heaviest gale, it would bend 5-1/2 feet from the vertical, at the top.

The question as to what height it is possible to reach, with given materials, before the pressure of the structure above is too great for its base, has been studied by M. Lossier. His conclusion is that a tower like this could be raised a third of a mile fur-ther; one of specially reenforced concrete to 20,000 feet; and one entirely of steel to 32,800 feet, or nearly a mile higher than Mount Everest, the loftiest mountain on the globe! Similarly, he concludes, the limit of bridges, with our present materials, is 4,600 feet for a concrete arch span; and 16,400 feet, more than three miles, for the span of a suspension bridge, before the steel would give under its own weight!