This thing kind of looks like a little Deathstar, and it will only take 10 trips to build. Let’s do it!

Also, they claim the atomic reactor reaches tempuratures of 600 billion degrees. Does this seem a little high to anyone else? 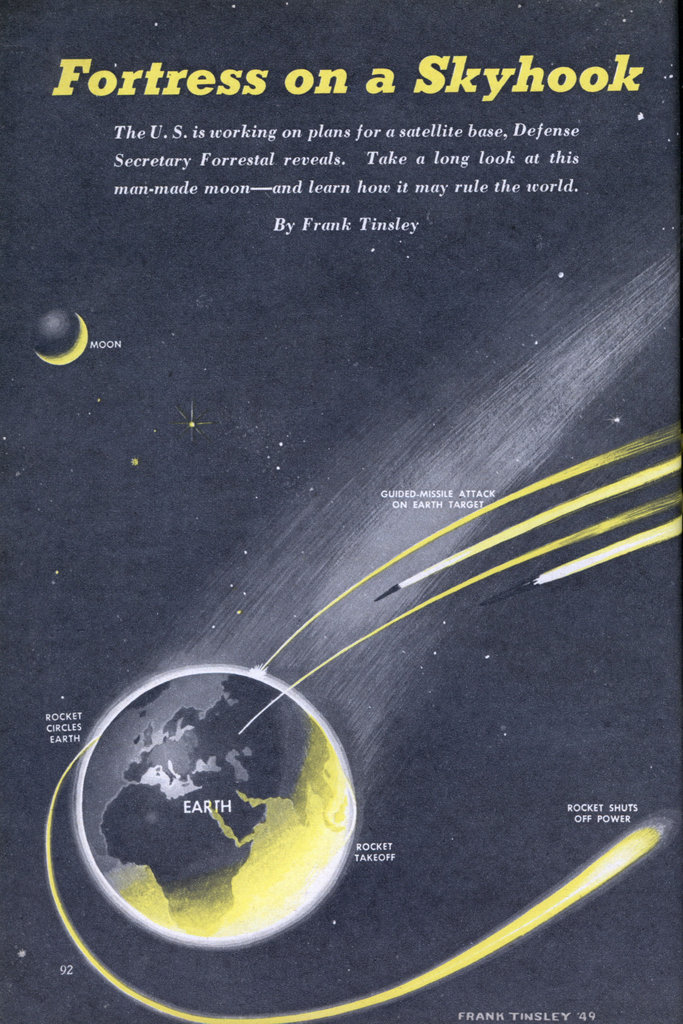 Fortress on a Skyhook

The U.S. is working on plans for a satellite base, Defense Secretary Forrestal reveals. Take a long look at this man-made moonâ€”and learn how it may rule the world.

EVEN Jules Verne would be amazed at the latest activities of the U. S. Department of Defense. Secretary James Forrestal disclosed recently that his department is working on a “satellite base” to revolve around the world like a miniature moon, as a military outpost in space.

“The earth-satellite vehicle program, which is being carried out independently by each military service, was assigned to the committee on guided missiles for coordination,” he revealed in his first annual report on the national military establishment. To provide an integrated program with resultant elimination of duplication, the committee recommended that current efforts in this field be limited to studies and component designs. Well defined areas of research have been allocated to each of the three military departments.”

There is considerable speculation as to just how far this program is meant to go. An earth satellite may be almost anything. It can range from a tiny bit of matter, projected into space for astronomical observation, to a permanent fortress on a skyhook.

We have already tried to hurl metal slugs into space. Last year at White Sands Proving Grounds, New Mexico, a V-2 rocket began firing these little man-made meteorites at 10-second intervals after reaching an altitude of 120,000 feet. The rocket zoomed up 111 miles above the earth and technical experts hoped that some of the slugs would escape the earth’s gravity so that they could be studied as tiny satellites. From all reports, this space experiment was a failure.

No one but the scientists and the top brass know the exact nature of the next effort. It may be a preliminary, unmanned rocket, equipped with automatic instruments and a radio telemetering device for sending their data back to earth.

On the other hand, rocket development may have advanced far enough for us actually to build a small space ship. Such a rocket could carry several scientists on a limited observation flight around the globe, then return to base before exhausting its air supply.

Finally, with experience gained from this trial flight into space, we could plan a bigger ship that would transport the first prefabricated units for assembling a base in the sky.

During World War II, the Nazis toyed with the idea of setting up a mirror platform in space to beam the concentrated rays of the sun in a deadly “sun-gun.” The first official hint that the U. S. was considering plans for its own secret weapon in space came to light in April, 1946. General Curtis E. LeMay had a cryptic item buried in an announcement then of his research program. A brief passage in this report called for development of “flight and survival equipment for use above the atmosphere, including space vehicles, space bases and devices for use therein.”

With the rapid progress of scientific research in the past few years, we have seen the birth of atomic power and the phenomenal growth of aviation engines from wind-milling motors to mighty rockets streaking a plane like the Bell X-l at a supersonic speed of 1700 mph. Unmanned rockets, like the Navy’s new Neptune, are nearly ready to outstrip the Nazis’ sensational V-2 and nudge the 250-mile mark. That will put today’s rockets already well out of the earth’s atmosphere and almost half way to space-station altitude.

The atomic power plant is about to solve many of the problems of space travel. The virtually unlimited power of the atom engine will enable the rocket to pick up speed gradually. Atomic energy’s almost infinite duration contrasts with the prodigious fuel load a chemical rocket would need merely to escape the earth’s gravity. Such a rocket would require a fuel tank as big as an oceanliner to flash it out of the world at the minimum theoretical speed of 5 miles a second. In short, the atomic engine’s virtues make it almost ideal for a space ship.

Almost, for there are some disadvantages tooâ€”such as radiation shielding and the dissipation of the enormous excess heat generated by the reactor. That heat hits the incredible figure of 600 billion degrees!

These problems are being tackled one by one. Atom experts are developing light, composite shields, which reflect neutrons with one material and absorb the deadly gamma rays with another. With some of the best brains in the country on the job, even that terrific heat and the bugs common to all new mechanisms and processes soon will be conquered.

Of course, in the coming space ship the atomic reactor will merely replace chemical fuel in providing heat for gas expansion. At super-atmospheric altitudes, where air is absent, some other working gas must be expanded and ejected through the jet nozzle to produce thrust. This gas will have to be carried in tanks.

At the moment, the odds favor an open-jet engine, with hydrogen as a working fluid.

A space ship designed around such a power plant is shown in the illustration for this article. Intended for exploratory cruises in space, and later, for use as a supply tender to a large, permanent satellite base, the craft is equipped with the heavy-duty landing-gear necessary in frequent shuttle trips. The three landing legs incorporate long travel shock-absorbers, are self-leveling for touch-down on rough terrain and are fully retractable in flight. The wells that contain these legs have ladders leading to the various decks. When unfolded, the inner surfaces of the lower elements form runways to the ground for emergency access. The space-ship tender is 200 feet long and 33 feet in diameter with its landing-gear retracted.

Pressurization, oxygen supply and air conditioning for the tender would be old stories to designers of modern transports. Instruments, communications radio and navigational radar may be readily adapted from exiting apparatus. Compact, powerful, liquid-fuel rocket motors are available for takeoff and landing. The Air Force already has designed flying suits that would need only slight modification for use in space. The only real lack, then, is a suitable power plant. And that’s on the way!

Given an atomic rocket ship, capable of limited flights into outer space, the practical problems of setting up a man-made moon as an armed base become immediately pressing.

For a temporary, experimental outpost, a 600-mile altitude would appear the more practical, since in this pioneer stage the shorter distance would make communications and access to the outpost easier.

Later a 22,300-mile range would probably make a better orbit for the permanent base. Then it could be “hooked” almost anywhere in the sky in an apparently fixed position over some particular target over the earth. Also, because of the greater distance, a base 22,300 miles outward bound from our globe would make a better platform for studying cosmic rays and for scientific observations of heavenly bodies.

A fleet of eight space ships would be required to complete the job of assembling our space base. One would be a basic-unit ship, a little longer than the base’s diameter. Five would be material ships and two, space tenders. The extra tender provides a necessary safety factor, to maintain supply service in case of damage or crackup.

The base, however, is almost self-sufficient. By using pumpkin plants growing in soilless gardens, as a source of oxygen, the fortress makes its own atmosphere on the principle of the balanced aquarium. The commander of the base can produce heat or cold in any desired degree by means of reflective or absorptive surfaces. To keep the men from floating about like balloons in the air inside the fortress, magnetized floors and clothing will act as artificial gravity and thus help maintain normal living conditions. From the sun’s direct rays, the fortress can draw unlimited power by utilizing their heat in a steam generating plant. Reflected from a shallow, dish-shaped, sodium mirror, the rays are focused on boiler tubes encased in a black, absorptive surface.

The superheated steam thus produced is piped down through the boiler-supporting stalk into a turbine-generator room below the mirror.

The advantages offered by the fortress in the sky are tremendous. Astronomers not only could make their observations 24 hours a day but also, because of the absence of atmosphere, would find these observations infinitely sharper and more detailed than any possible on earth. Scientists could map the moon as from a low-flying plane. They could survey the more distant planets with similar ease, study their special conditions and their atmospheres and analyze their physical properties by spectrograph.

From the military point of view, the power that mans this fortress on a skyhook can control the world. From an altitude of more than 22,000 miles, the whole earth would lie in the base’s bombsight. The fortress could launch its missiles almost with a push of the hand, to coast down on the wings of gravity. Unimpeded radar could track such a missile to the very moment of impact, then evaluate the deadly results. Search radars also would give ample warning against any counterattack by enemy rockets.

Luckily, the nation that is actually speeding plans for this all-powerful base in space is none other than America. Because as a nation we still hate war, we may offer our projected space weapon to the United Nations to assure international order, after adequate provisions for safeguarding our own security have been guaranteed.

In the hands of the UN this permanent fortress on a skyhook might hang like a big “quiet” sign over our ever -brawling little worldâ€”and make that peace pretty permanent, too.