Modern Mechanix
Issue: Feb, 1933
Posted in: How to
6 Comments on Fortune Making Ideas for Inventors (Feb, 1933) 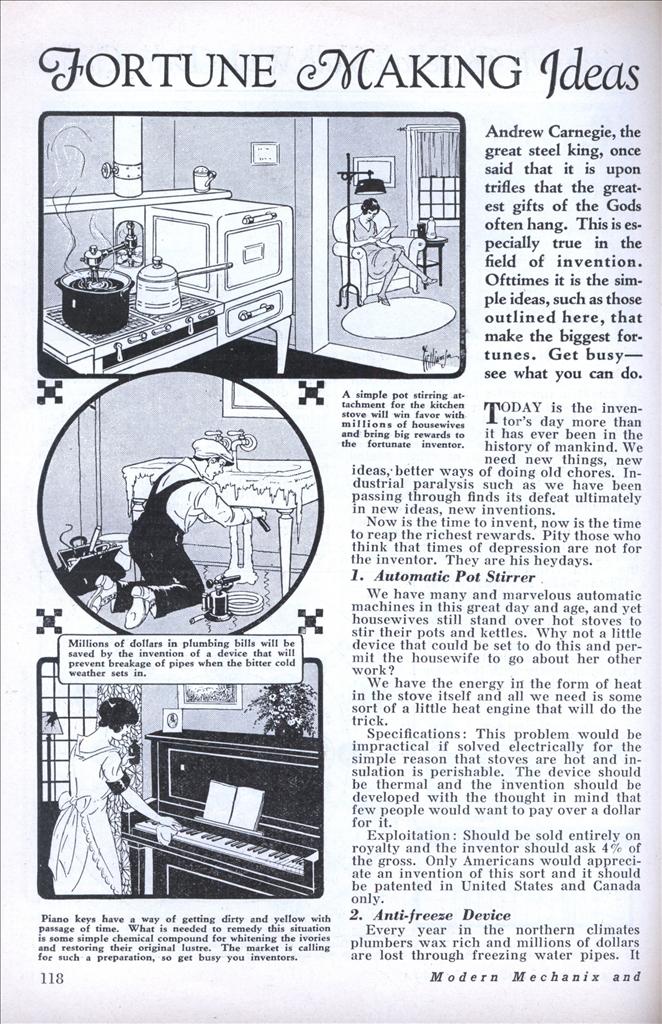 Andrew Carnegie, the great steel king, once said that it is upon trifles that the greatest gifts of the Gods often hang. This is especially true in the field of invention. Ofttimes it is the simple ideas, such as those outlined here, that make the biggest fortunes. Get busy— see what you can do.

TODAY is the inventor’s day more than it has ever been in the history of mankind. We need new things, new ideas,-better ways of doing old chores. Industrial paralysis such as we have been passing through finds its defeat ultimately in new ideas, new inventions.

We have many and marvelous automatic machines in this great day and age, and yet housewives still stand over hot stoves to stir their pots and kettles. Why not a little device that could be set to do this and permit the housewife to go about her other work?

We have the energy in the form of heat in the stove itself and all we need is some sort of a little heat engine that will do the trick.

Specifications: This problem would be impractical if solved electrically for the simple reason that stoves are hot and insulation is perishable. The device should be thermal and the invention should be developed with the thought in mind that few people would want to pay over a dollar for it.

Exploitation: Should be sold entirely on royalty and the inventor should ask i% of the gross. Only Americans would appreciate an invention of this sort and it should be patented in United States and Canada only. 2. Anti-freeze Device.

Every year in the northern climates plumbers wax rich and millions of dollars are lost through freezing water pipes. It really seems as though there would be some method of permitting expansion to take place in pipes without their freezing. Perhaps some kind of a gadget placed in the water line would take care of the matter. At any rate I certainly do know that a mint of money could be made with the scheme.

Specifications: Should not cost over fifteen dollars and must be able to prevent pipes either from bursting after they freeze or from freezing in the first place.

Exploitation: Should be patented in all northern countries and sold on a royalty in each country.

I cannot help but wonder why some wise fellow has not developed a simple compound for whitening piano keys. I once tried to buy such a thing and found that it was not manufactured. Here is a fine opportunity to develop a fast working material that any housewife may safely use and that may be protected with a formula patent.

Specifications: Should be made to sell for twenty-five cents and enough should be placed in each can or package to permit cleaning the keys at least a dozen times. The material should not only function in connection with pure ivory keys but it should also be effective in connection with the cheap celluloid substitutes.

Exploitation: This should be patented in all of the leading countries of the world and sold on royalty.

Our post offices are always closed on Sundays and holidays. What is needed is an automatic postage machine into which we may place either a letter or a small package and have it properly weighed and stamped after the proper amount is indicated on a dial.

Then the mailer need only insert the proper coin and his letter drops down into a chute to await collection. Today we have all the necessary electrical devices to bring this result about. It will simply take some ingenious fellow to assemble what has already been perfected into a new combination of elements.

Specifications: Should occupy a rather small space and should not be too complicated. Should be able to handle packages up to one pound and should not cost over two hundred dollars to build.

5. Furnaces That Need Not be Cleaned.

Hot air furnaces must be cleaned out at least once a season and more often than that if the fire did not have to be extinguished. By the middle of the winter every furnace in use has accumulated a thick coating of soot and foreign matter that has a low thermal transmission capacity and the result is the furnace starts to insulate itself from its surroundings.

What is needed is either a way of filtering this out of the furnace as fast as it is formed or else having a lever so arranged that when it is pulled, the soot will disappear down a chute and into the ash pit.

Specifications: This system cannot add over five dollars to the cost of building a hot air furnace and it should be a purely mechanical application. The design of the furnace might be changed in such a fashion as to automatically take care of this.

Exploitation: Should be sold outright for $25,000 and should be patented in the United States and Canada. Furnaces of this type are not used in Europe.

If I knew a bit about chemistry I would set out to lick this problem, for I know the result would be worth a young fortune. Count the lady friends and housewives among your own acquaintances who will not treat their floors with wax because it is dangerous. Wax does have the advantage of keeping a floor in good appearance and preserving it but it has been responsible also for a great number of serious accidents.

Why is it not possible to find something, somewhere, that may be added to the wax and that will not detract from its ability to keep floors in the proper condition and yet will prevent the wax from becoming deadly underfoot.

Specifications: The materials used should be inexpensive, should have no odor and should not harm wood. It should also be colorless.

Exploitation: Should be patented in all of the countries of the world and should be licensed only.

Here is a simple thing and yet it has escaped the attention of inventors for years on end. We need a new kind of price tag that will not make holes in the garments or articles upon which they are used. They could be sold to department stores by the countless millions and I feel sure that the inventor could roll up a tidy bank roll if he could solve the problem.

Specifications: Must use no pins or clamps. Should in no way damage the garment and should be easily removed. Cheapness is a great factor and the cost should be a small fraction of a cent.

Exploitation: Should be patented only in the United States.

I wish I had but one-hundredth of the money that has been made by the inventors of devices that could be used on sewing machines, to say nothing of the great fortunes that were piled up by the pioneers. There is still a great opportunity in this field. What is needed is a simple attachment that will lock the last stitch—that is, prevent the thread from coming loose.

Specifications: Should cost not more than a dollar and should be fashioned so that it could be applied to any machine regardless of manufacture. Might be made of pressed metal to keep production costs down to a low figure.

Exploitation: Should be sold on a royalty basis with $5,000 down payment and 3% of the retail price of each article. Should be patented only in the United States.