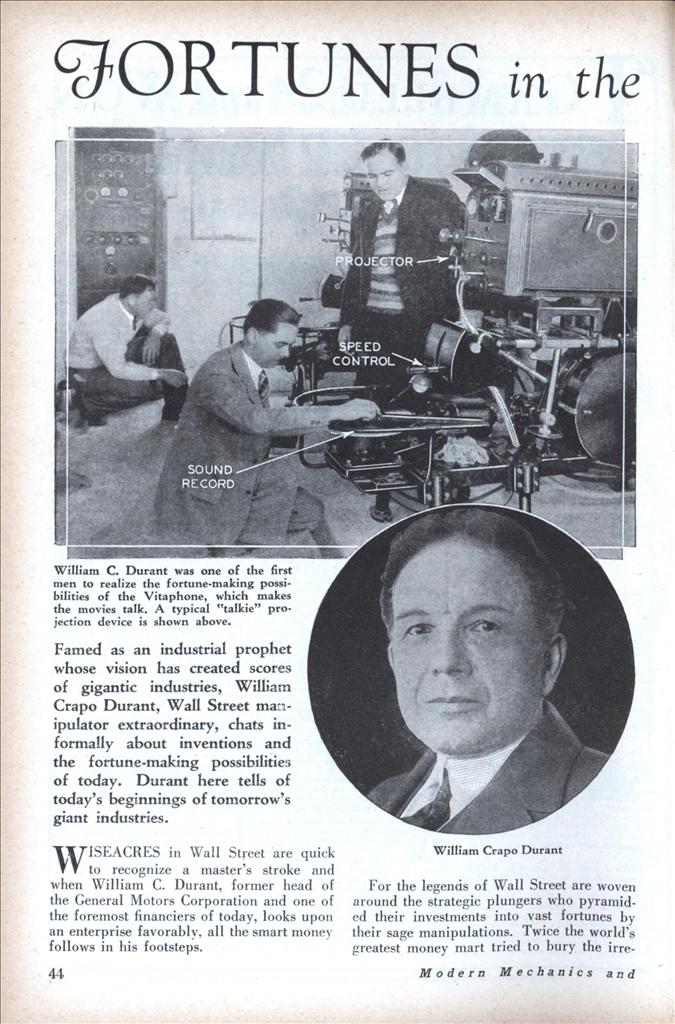 FORTUNES in the Making

W. C. DURANT tells of inventions which are about to reap millions, in an interview with ALFRED ALBELLI

WISEACRES in Wall Street are quick to recognize a master’s stroke and when William C. Durant, former head of the General Motors Corporation and one of the foremost financiers of today, looks upon an enterprise favorably, all the smart money follows in his footsteps.

For the legends of Wall Street are woven around the strategic plungers who pyramided their investments into vast fortunes by their sage manipulations. Twice the world’s greatest money mart tried to bury the irre pressible Durant, chanted his requiem on each occasion, only to see a mightier giant of industry arise from the ashes.

Two years ago Durant was like a prophet in a wilderness,.practically crying out to his brethren to put their money into Vitaphone. At that time “talkies” were unknown, and only a couple of short reels had been shown in New York theaters. Only 24 months ago was this prediction of Durant’s made— made at a time when the first full length talking picture was being ballyhooed on New York signboards and had not yet been shown. Nearly all theater-goers remember John Barrymore in the talking picture, “Don Juan”, and the revolution which has attended motion picture art within 24 short months since.

Think of the fortunes talking pictures have made in that time!

Such predictions are what the man in the street terms “calling the cards”!

It was with the idea of getting this dy- namic, magnetic executive’s point of view on present fortunes in the making that I interviewed him in his enormous suite of offices in New York City, where he maps out his campaigns in his ceaseless war for millions.

But before I convey to you the things Mr. Durant “called the cards on”, before I tell you of things which his friends and confreres have hit upon and which are making them fortunes, I want you to briefly resume the meteoric career of this stormy petrel of finance who founded General Motors and whose name has been a household word with ambitious American youth.

Back in 1908 William C. Durant, organizer of General Motors corporation, predicted that his infant company would some day show earnings exceeding those of the United States Steel trust, which was then the overpowering giant of American industry. Three years ago this prediction came true.

Durant foresaw the future of electric refrigeration, and ten years ago went on record with the statement- that Frigidaire, the name and capital for which Durant supplied, would some day make enough money to pay all the fixed charges of General Motors. Today, Frigidaire profits have exceeded that prediction and are running into millions.

These are only a few striking examples of Durant’s ability to pick winners in the great American Industrial Derby. But they go to show the wideness of Durant’s interests, and lend a wallop of almost certain predicted outcome to the views expressed to me by Mr. Durant.

He talked of fortunes in the making—of inventions in which he is interested which are already familiar to the public, and which are reaping millions of dollars for their backers; of other inventions which are not yet quite so well known, but which are gold mines in the rough, holding in them just as huge fortunes, as yet unwon, as General Motors and Frigidaire and Vitaphone represented in the early years of their development.

“One of my latest pets, and one which to me quite decidedly represents a fortune in the making,” said Mr. Durant, “is the rayon industry. The development of rayon in the last few years has been amazing in rapidity and volume. Rayon is a yarn which can be converted into artificial silk. It is made from wood pulp which, after a number of processes, is drawn out into lustrous threads which are an extremely pure form of cellulose, being practically identical with cotton chemically, but having physical characteristics different from either cotton or silk.

“I do not hesitate to state that I see a great future in the rayon industry. Personally, I supervised the building of the new plant of the Industrial Rayon corporation at Covington, Va. I find that rayon yarn is being used extensively and with increasing popularity in 21 articles which were previously made of silk or other fabrics.”

Rayon has already been on the market long enough to become familiar to everybody. It is well established in popularity and is already returning millions of dollars to the men back of the industry—this in spite of the fact that it is a mere infant as industries go. Possibilities for the future have scarcely been touched. Rayon might be described as being in a stage of development comparable to that of the automobile when it graduated from a one-lunger to a two-cylinder motor.

As many millions will be made in rayon in the next generation as were made by steel in the past. It is one of Ameri- ca’s infant giants, growing bigger every day.

Durant’s vision seems to be trained on the textile field, for another of his fortune-making inventions right now is the cotton-pick-ing machine. This device is on the point of making millions of dollars for many men.

“The first successful cotton-picking machine,” he explained, “has been made by the American Cottonpicker corporation in which I am now financially interested. It is not air suction that is used in extracting the cotton from the boll. The embryonic fortunes which are incorporated in this venture are to be found in the fact that the actual picking is accomplished simply and easily by a mechanical principle.

“I believe the cotton-picker will have as important a bearing on American agricultural life, particularly in the South, as the invention of the reaper by Cyrus McCormick has had since 1834. The foundation for a huge business lies in this machine, which makes an accurate mechanical process out of what was formerly a laborious and slow hand method of harvesting a perishable and gigantic crop.

“It was suggested by watching cattle ‘wiping’ or ‘swiping’ cotton out of the bolls with their tongues. This simple practice of the cattle has long been familiar to everyone interested in cotton.

“It is a light machine about the size of a motorcycle, two feet wide, five and one-half feet long, and four and one-half feet high, weighing about 300 pounds, rolling on three wheels between the rows. It carries its own bag, holding from 60 to 100 pounds of cotton. It is powered with a small gas engine, using about one gallon of gasoline in a full day’s running. This invention has got a flock of gold mines buried within it. Its widespread use has proved amazing and I can see that it will make millions for many men.”

Here is your chance to check up on Durant’s ability to recognize a fortune-making idea when he sees it, you who are skeptical. Will the cotton-picker take its place along with the Frigidaire, Vitaphone, General Motors and others whose success Durant predicted years ago.

Since he has been credited with being the largest individual operator in securities on the stock market, some of Mr. Durant’s views on the subject will be of interest.

To the question, “is it easy to earn a fortune in the stock market?” Mr. Durant’s answer was significant.

“It isn’t easy for anyone who hasn’t elaborate means of getting at and analyzing information to get at the bottom of what a stock or stocks are worth. The outsider plays the market at a serious disadvantage. It is one thing to buy trustworthy securities for investment and another thing to go in for speculation. Too many who think they are speculating carefully are simply gambling and taking a gambler’s chance.”