Modern Mechanix
Issue: Jul, 1933
Posted in: Sign of the Times
No Comments on Fortunes Waiting for Inventors (Jul, 1933) 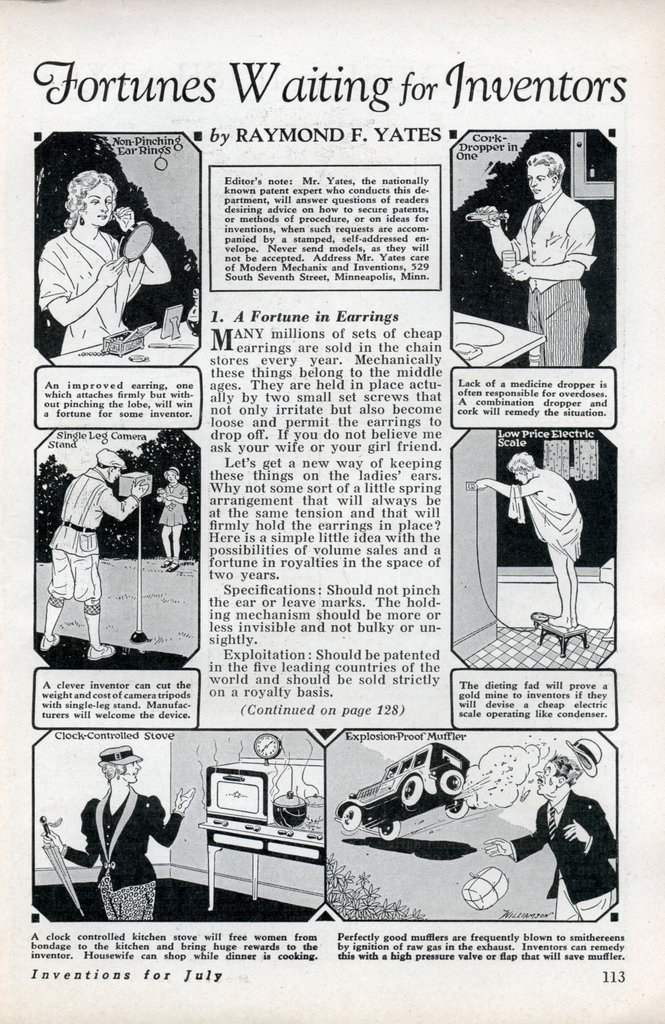 Editor’s note: Mr. Yates, the nationally known patent expert who conducts this department, will answer questions of readers desiring advice on how to secure patents, or methods of procedure, or on ideas for inventions, when such requests are accompanied by a stamped, self-addressed envelope. Never send models, as they will not be accepted. Address Mr. Yates care of Modern Mechanix and Inventions, 529 South Seventh Street, Minneapolis, Minn.

1. A Fortune in Earrings

MANY millions of sets of cheap earrings are sold in the chain stores every year. Mechanically these things belong to the middle ages. They are held in place actually by two small set screws that not only irritate but also become loose and permit the earrings to drop off. If you do not believe me ask your wife or your girl friend.

Let’s get a new way of keeping these things on the ladies’ ears. Why not some sort of a little spring arrangement that will always be at the same tension and that will firmly hold the earrings in place? Here is a simple little idea with the possibilities of volume sales and a fortune in royalties in the space of two years.

Specifications: Should not pinch the ear or leave marks. The holding mechanism should be more or less invisible and not bulky or unsightly.

Exploitation: Should be patented in the five leading countries of the world and should be sold strictly on a royalty basis.

2. A Tripod With a Single Leg

When one stops to think the matter over, one wonders why camera tripods have three legs. Why not just one leg? There MUST be some way in which this could be done. How about a rubber vacuum cup? The vacuum cup is removed from the end of the “tripod” when the camera is used out-of-doors and the pointed end is simply thrust into the soft earth.

The purely commercial angle of this problem is rather interesting for by the use of a single leg we could not only greatly cut the cost of a tripod but we could also cut its weight one-third. The telescoping single leg should be adjustable so that it could be held at different heights.

Specifications: Light weight and adaptability to various conditions are the chief requirements.

Exploitation: To be sold outright to a large manufacturer of camera equipment. Should be patented in the principal countries of the world.

As I have mentioned previously, many tidy fortunes have been made by inventors who have provided housewives with some little gadget that would save time and labor.

When one comes to think of it it seems rather peculiar that some inventor has not produced a clock-controlled stoveâ€”that is a stove with each burner subject to time control by a central clock regulator.

With such a device the housewife could put a roast or pie in the oven or a vegetable on the burner and leave it with the assurance that it will not burn and that the gas will be turned off at the proper moment.

Specifications: Should not be excessively priced and should also be made so that it could be attached to the type of stove now in use.

Exploitation: Should be licensed out to all of the larger manufacturers of gas stoves.

“Take ten drops before meals in a warm glass of water,” says the doctor. The patient has no really convenient method of measuring out these drops. It is high time some clever inventor developed some sort of a dropper-stopper for bottles, something that would not only act as a stopper but would also act as a dropper.

The dropping could be controlled by a slight squeezing or perhaps the thing could be made perfectly automatic. At any rate if such a thing could be made to sell for a dime in the drug stores I dare say that the royalty piled up within the space of one year would be sufficient to make the inventor rich.

Specifications: Cheapness and reliability are the two principal features to be sought. Both should be automatically sealed when standing in an upright position.

Exploitation: Should be patented in all of the principal countries of the world. Should be sold only on royalty.

It’s very easy. Bath room scales are very much in demand today, but they are too high. We need very cheap scales. Why doesn’t some electrical experimenter develop a scale in which the sensitive element, in place of being a spring, is a compressible electrical resistance? The greater the weight on the resistance, the greater the reading on the meter.

Naturally the electrical meter used in connection with the outfit could be a very cheap one and in place of being calibrated in volts, it would be calibrated in pounds.

Specifications: This scale should sell for three dollars or less. It should be accurate to within 2 per cent and should not be affected by temperature or humidity changes.

Exploitation: Should be patented in all of the leading countries of the world. Should be sold outright in the U. S. for $40,000.

When raw gas enters an automobile muffler it invariably explodes if a hot spark passes through the exhaust. The result is usually rather disastrous on the part of the muffler. Its sides are often blown out and the device rendered useless.

As a remedy, why not a high pressure valve or flap that will open under such strain and relieve this condition? At any rate I am turning the problem oyer to my readers.

Exploitation: Should be patented only in the United States and should be sold outright.