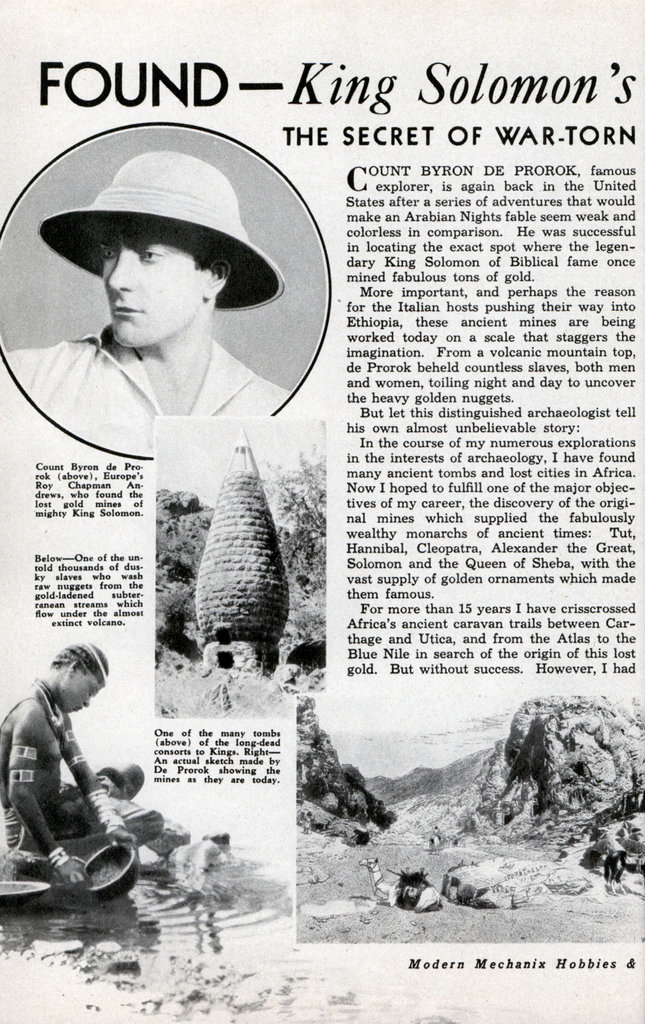 In the course of my numerous explorations in the interests of archaeology, I have found many ancient tombs and lost cities in Africa. Now I hoped to fulfill one of the major objectives of my career, the discovery of the original mines which supplied the fabulously wealthy monarchs of ancient times: Tut, Hannibal, Cleopatra, Alexander the Great, Solomon and the Queen of Sheba, with the vast supply of golden ornaments which made them famous.

For more than 15 years I have crisscrossed Africa’s ancient caravan trails between Carthage and Utica, and from the Atlas to the Blue Nile in search of the origin of this lost gold. But without success. However, I had located many valuable clues, some of them passed down from generation to generation, others mere whispers gleaned from adventurers who had been foolhardy enough to penetrate into these mysterious interiors and later lose their lives.

These clues convinced me that all trails led into the “back door” of Ethiopia, a remote western desert region ruled over by Solomon Ghogoli, a sultan who admits the supremacy of only one other ruler, Haile Selassie.

But an unforeseen difficulty presented itself:

In order to penetrate the land of mystery we positively must have Haile Selassie’s official permission, and in writing. Otherwise we would be certain victims of Sultan Ghogoli’s murderous warriors.

This was just before the Italo-Ethiopian war began. But even then Selassie must have foreseen the conflict because he was at that time so much occupied with military affairs that we found it next to impossible to see him. But finally, after endless formalities and diplomatic action, the Emperor gave us the first permission ever given to white men to explore the forbidden land of the Blue Nile.

After receiving the first official permit to cross the closed area of the British Sudan we reached Kumuk from Kaston by following the jungle-enclosed banks of the Blue Nile to where Selassie had promised us a military escort of 120. But at the desolate barrier we waited in vain.

Right here we made the mistake that almost cost us our lives. We decided to penetrate the interior in the hopes of meeting the escort there. This would have been a wise procedure if we had been properly supplied with official passports from the Emperor. Unfortunately the soldiers who were to bring them failed to show up, and we were so impatient to be on the move that we proceeded anyway.

So we headed straight for the Old Man of the Mountain, dread Solomon Ghogoli, Sultan of the Shangul. He was over 100 years old, maintained many wives and was, it was rumored, the owner of secret gold mines which no white man had ever seen. Never was he known to permit a European or American to visit his vast, savage realm.

For three terrible days we trekked across the enormous canyons and great mountains of this legendary land. Even in the shade our thermometers registered from 140 to 160 degrees Fahrenheit, so much greater than the heat of the human body that we were actually able to cool our hands by clamping them under our armpits. The merciless heat once reached 167 degrees, three-fourths as hot as boiling water.

Our porters were terror-stricken. They were fearful of being caught and killed by the savage sultan. No wonder many of them deserted.

On the fourth day we made a fantastic discovery. While daytime camping in a jungle with my companions I suggested we climb a great mountain about two miles from our camp. We did so and found its approximate center was the huge crater of a smoldering volcano. Aided by powerful binoculars from the heights on the far side we saw, a thousand feet below, a weird sight: untold thousands of black slaves, both men and women, working feverishly in the subterranean river bed.

Amazed, I asked our guide, Diressa, “What on earth are they doing?”

He warned “Come away, master! They are Ghogoli’s slaves, washing out gold.” The sight excited us, and soon we tumbled and slid down there. For the skeptical minded, let me add that our movie cameras took in the entire astounding spectacle. Some of those nuggets were as big as a man’s fist.

While the cameras were grinding away, my fellow scientists and I explored the rocks of the nearest canyons and found ancient hieroglyphics and rock drawings on the entrances of many of the abandoned mine shafts.

Our excitement knew no bounds. By purest chance we had achieved the major objective of our expedition. Think of it! We had found the precise spot where King Solomon of Biblical fame mined the gold that provided his court with unparalleled luxuries! Was there much gold here? There must have been untold tons of it, and the precious metal was being panned in the same crude way as practiced in Bible times.

Yes, these mounds and the rock markings told us the story students of archaeology had been seeking in vain to find ever since the mines were lost.

We were highly successful in bribing the guards with the aid of Ethiopian money, to permit us to look at some of the tombs. Which may sound strangeâ€”our “buying them” in this fashion, since they were handling such vast quantities of raw gold. But if a guard was caught with virgin gold in his possession he was executed or mutilated. But any actual money was not disturbed.

Then we heard the booming of giant tomtoms telegraphing messages to Ghogoli in his stronghold 50 miles away. His sacred territory was being invaded by members of the races he despised more than anything else in the world. And here in the mines danger lurked everywhere. The blazing heat was all but unbearable and the guards looked murderous.

Nevertheless, we started digging into the tombs and worked all that night and through the next day. But at dusk the tom-toms began to boom again. Time was short. We knew we must act with the greatest speed, and instantly.

Hastily we packed up our specimens and started on a race for the Yabus River and safety, and three days later, utterly exhausted, we reached Albi Moti, the nearest Ethiopian village, praying that the promised military escort was there awaiting us with our official passports. But it was not.

We camped on a hill near the village, and as if by magic suddenly found ourselves surrounded. Ghogoli and his warriors had beaten us to the river! Diressa, our guide, and a panic-stricken one, served as our spokesman, for the murderous sultan was coming up the hill with his mighty retinue. He looked like an apparition, wiry, eagle-eyed, ancient, hook-nosed and evil.

We had built our camp in a semi-circle. Guns in hand, we eight white men and our scant band of about 50 quaking porters prepared to parley.

It was a moment that might cost us our lives. Through chattering teeth our interpreter spoke with one of the sultan’s men and then told me:

“Ghogoli wants to know what right you have in his country?”

I told Diressa to say: “We are the guests of Haile Selassie, King of Kings.”

“Not king of this king! Where are your passports?”

“Coming any minute with Selassie’s soldiers from Walya.”

“We don’t believe you. Either you stay here as my slaves or pay me 1,000 thalers each for ransom!”

The savage sultan’s followers were behaving like any bandits would under like conditions, yet it was absolutely necessary that we show no fear in front of these murderous-looking Abyssinians. So we expressed willingness to accompany Ghogoli to his headquarters.

There was a long palaver. The sultan was not satisfied with our reason for invading his sacred territory. He was certain we came for his precious gold and pointed out that always he imprisoned or killed all trespassers.

When we asked the sultan why he was accumulating so much gold dust, the answer was: war clouds and fighting in the East. Gold to buy guns for the British to keep out the Italians.

Does Italy Want These Mines?

And this, mind you, was before the Italo-Ethiopian War began! Yes, here were the ancient mines of the Queen of Sheba being used to help preserve the independence of Abyssinia’s far off, savage provinces.

Did we sleep very well that night? Not a wink. As dusk fell, hundreds of savage warriors, behaving like madmen and shrieking a fiendish gibberish which even our interpreter did not understand, paraded all around us. From time to time they waved gruesome trophies, trophies made of shrunken heads.

Suddenly Diressa caught a few familiar phrases and told us that we were camping on the legendary “Execution Hill”! All night the giant tom-toms of the world’s most warlike savages boomed in our nerve-wracked and weary ears. Death to the invaders was certain.

Next day Sultan Ghogoli and his oldest son came to gloat over our precarious situation. Our filled money cases and our numerous packages of canned goods and other delicacies made them envious. They handled our modern rifles lovingly. And again Ghogoli repeated his threat of yesterday: “Haile Selassie doesn’t know you. You leave all baggage, money and guns here and get back to the British Sudan.”

Only a miracle could save us now.

But all was not lost after all. The very next day Ghogoli and company changed their attitude and procedure. Instead of gloating over our unhappy plight, they treated us like kings. Dressed in their grandest finery, they plied us with costly presents.

What had happened? Just this: that same morning one of Selassie’s swiftest riders had dashed into the village with the most welcome news of allâ€”that our long-hoped for military escort from Selassie, plus the all-important passports, was only a few miles away.

Yes, the mighty Sultan was a changed man. He was now exceedingly contrite and lavish. He showed us many things no white man had ever seen before: his most valuable golden idols, dating back many centuries, which his slaves had dug up in the surrounding region; also a number of huge, rough diamonds.

We in turn were quite willing to offer presents. And maybe we didn’t bless Haile Selassie! His name was indeed powerful in that wild stronghold of barbarism.

From then on our journey back to Addis Ababa was pleasant and uneventful. Next day, accompanied by the Sultan’s tamed, if somewhat sullen warriors, we met Selassie’s retinue of 120 warriors on the bank of the Yabus River.

After months of studying the movies and specimens of our exploration trip, I am convinced that this was the legendary land of Ophir of Biblical fame, whence came the gold, frankincense and other treasures for Solomon’s celebrated temple in Jerusalem. I also believe that this newly discovered oldest and richest of gold mines is one of the secret, but prime causes of the Italo-Ethio-pian war!