That sure worked out well… 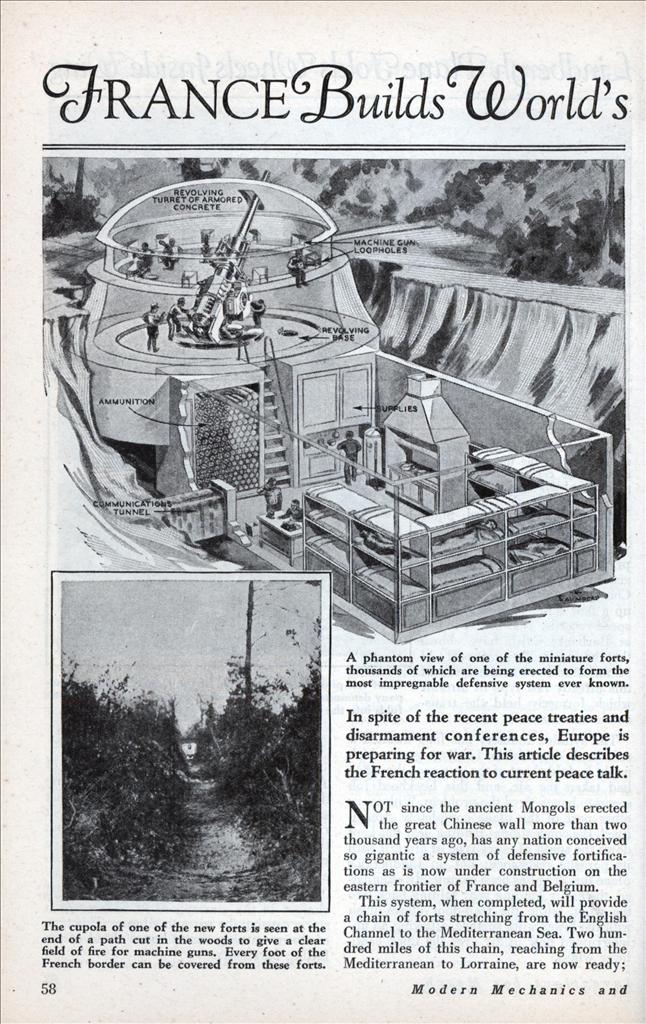 In spite of the recent peace treaties and disarmament conferences, Europe is preparing for war. This article describes the French reaction to current peace talk.

NOT since the ancient Mongols erected the great Chinese wall more than two thousand years ago, has any nation conceived so gigantic a system of defensive fortifications as is now under construction on the eastern frontier of France and Belgium.

This system, when completed, will provide a chain of forts stretching from the English Channel to the Mediterranean Sea. Two hundred miles of this chain, reaching from the Mediterranean to Lorraine, are now ready; and that this southern half should be rushed to completion first, shows that the French Republic fears Italy at this time more than disarmed Germany.

This defensive chain consists of armored concrete cupolas placed three-quarters of a mile apart, with a secondary chain of similar “pill-boxes” placed farther to the rear and half way between the first line. Any two of the front line forts, with its corresponding member in the rear, will form a triangle three-quarters of a mile on each side with its base toward the front. In wartime they are to be linked together with a system of trenches and underground passages connecting with each other and with the rear. The entrenched protection line connects to the rear with an underground railway for bringing up munitions and evacuating the wounded.

Each of these miniature forts will be equipped with heavy guns for long-distance firing, and will bristle with machine guns for use against attacking infantry.

The crew for each casemate numbers thirty men, and comfortable living quarters are provided forty feet underground. Under this forty feet of earth is a ten-foot layer of concrete, while the turrets themselves, which project but slightly above the surface of the ground, will be of heavily armored concrete.