Mechanix Illustrated
Issue: May, 1956
Posted in: Automotive
Tags: auto reviews, Renault
7 Comments on France’s Answer to the Volkswagen (May, 1956) 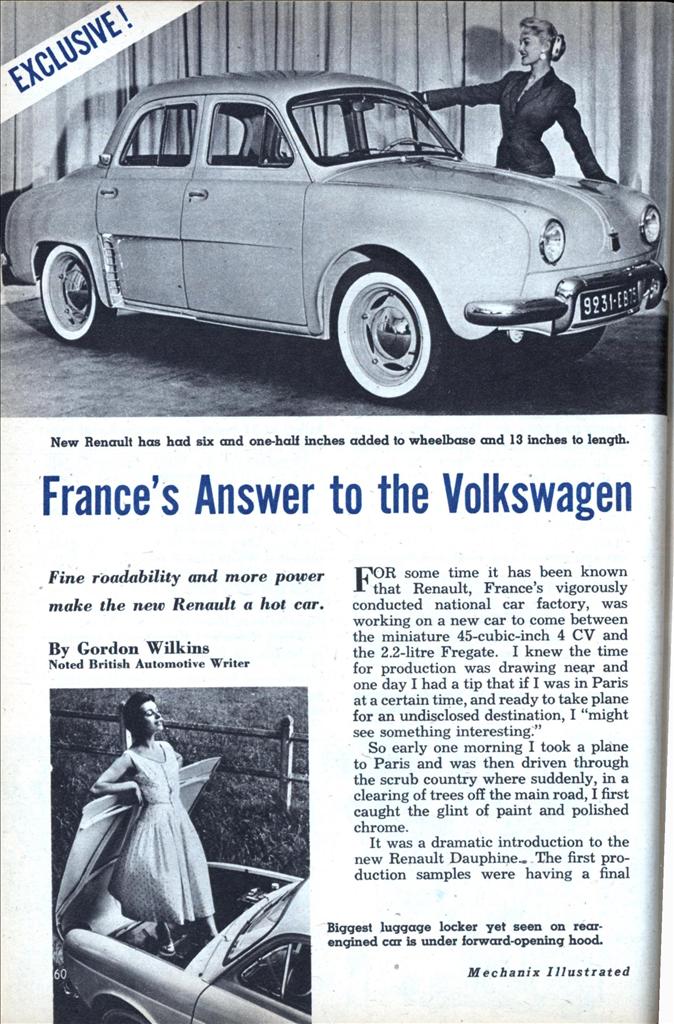 France’s Answer to the Volkswagen

FOR some time it has been known that Renault, France’s vigorously conducted national car factory, was working on a new car to come between the miniature 45-cubic-inch 4 CV and the 2.2-litre Fregate. I knew the time for production was drawing near and one day I had a tip that if I was in Paris at a certain time, and ready to take plane for an undisclosed destination, I “might see something interesting.”

So early one morning I took a plane to Paris and was then driven through the scrub country where suddenly, in a clearing of trees off the main road, I first caught the glint of paint and polished chrome.

It was a dramatic introduction to the new Renault Dauphine. The first production samples were having a final tryout prior to full scale manufacture at the big new factory at Flins outside of Paris.

No hasty effort this, for prototypes have already covered one and a quarter million miles in countries from the Arctic Circle almost to the Equator, not only in the hands of works drivers but with ordinary drivers at the wheel who often find the faults more quickly than the experts.

With lines inspired by the Fregate, it has mechanical parts developed from those of the 4 CV, and it represents a determined French effort to challenge the present superiority of the Volkswagen in overseas small car markets. At home its success is assured, for it fills a gap in current French production, and orders were rolling in before the public even saw it.

Where does it score? It gains points on performance and economy but above all on handling, riding comfort and space. Space in the rear seat is especially good for a car of this type. And by carrying the spare tire horizontally behind the front bumper, and putting the fuel tank under the rear seats, the nose has been left free for the biggest luggage locker yet seen on a rear-engined production car.

Figures fill in the picture. By comparison with the 4 CV Renault it has six and one-half inches on the wheelbase, 13 inches on the length. Front track is one and one-half inches up and width is three and one-half inches greater. Its height is slightly less. An extra .013 inch on the cylinder bores has raised engine size to 51 cubic inches, and a new head with larger valves helps in giving an output of 30 bhp. A lower numerical axle ratio reduces engine revs, contributing to savings in wear and fuel consumption.

But figures alone cannot convey the personality of a car and it was only after a couple of days of hard driving over the rough, narrow and tortuous mountainous roads of Corsica that one could appreciate the true worth of the Dauphine, not just as a pleasant small car but as one of the best-handling small closed cars, sports or touring, ever built. „ I thrashed it flat out, up and down, back and forth on those mad roads which for miles on end consist of hairpin bends strung together until you feel you must eventually run into your own tail lamp. I found nothing on wheels that could keep up with it.

The car had light responsive steering, good castor action and no discernible roll, no matter how viciously it was thrown into the swerves. Most rear-engined cars have inherent oversteer which makes them tricky to handle on wet and slippery roads. But on the Dauphine there is just enough to help the tail round on the sharp bends without causing complications during a swerve on the straight, or when the car goes into a downhill bend too fast. After a few minutes at the wheel you find you can start a slide or stop it whenever you want, guiding the car with coordinated throttle and steering like a first-class sports model.

Second gear is a splendid ratio, in which I drove for hours, sprinting to between 40 and 50 mph wherever there were a few yards of straight, then kicking the brake pedal to slow down for those wicked corners. The short central lever and the robust synchromesh are in character, the only complaint being a rather lengthy travel across neutral. Top gear is flexible, too, and the ratios are so well spaced that four speeds don’t seem nearly so desirable as they do on most small cars. After allowing for the error of a needlessly optimistic speedometer, a quick acceleration check showed the following results: Zero to 50 mph through the gears was 18.2 seconds. Best maximum speed on a fairly rough road was 70 mph. The average of two runs in opposite directions was 68 mph.

Driven flat out, up and down the mountain roads, spending far more time in second gear than in top, one car did 34.5 miles per Imperial gallon and another did 32. These figures may be regarded as the heaviest consumptions it is possible to get.

Driving briskly on normal roads there should be no difficulty in getting well over 40 miles to the gallon. (About 32 miles per American gallon.—Ed.) The brakes stood up to all the punishment we could give them and needed only a light pressure on the pedal. Add to all this the unexpected virtue of silence, lack of road rumble even over rough, loosely surfaced roads, and lack of engine noise even in the rear seats, and this new French baby with quite a conventional European design shows up a most unconventional set of advantages.

It is not easy to see how it has been done. Front suspension is normal, with wishbones, coil springs and an anti-roll torsion bar. The rack and pinion steering has return springs to augment the castor action, as on the 4 CV. The rear suspension is conventional swing axle with coil springs. Weight distribution, ready for the road, shows 61 per cent of the weight on the rear, dropping to 57 per cent at full load. This has to be compensated for by using much higher tire pressures at the back than at the front. The result is an advance in handling which one would not have thought possible.

Available as an extra is the Ferlec electro-magnetic clutch which eliminates the clutch pedal. Gear shifting is simply a matter of moving the lever; micro switches and electric relays look after the clutch action. It is not possible to make quite such instant changes as are possible with the classic clutch. But the extra driving ease makes it well worth while for everyone but the competition driver who has to consider every tenth of a second. And look out for the Dauphine in the big rallies for the French fanatics are already planning oversize sleeves to give 54 cubic inch displacement, twin carburetor sets and other modifications which should give it over 50 horsepower.

Practical layout and sensible controls make driver and passengers feel comfortable at once. There are four good doors and a surprising amount of interior space, knee room and head room at the rear being better than on most competitive small cars. A new type of thin but adequate backrest for the front seats saves space. Cushions are foam rubber on zigzag springs.

Interior trim is in gay plastic and cloth combinations but head lining is in cloth. Under the two-spoke steering wheel are convenient switches for head, side and parking lamps and self-cancelling indicator switch. The ignition key works the starter. Instruments are legibly arranged under a cowl in front of driver and the sloping bonnet gives a good forward view.

The bonnet opens forward, taking headlamps with it. The battery is in the locker and the spare wheel behind the bumper is reached by snapping down the front number plate. Release catch can only be reached from inside luggage locker, which in turn is controlled from inside car as an anti-theft precaution. Headlamps have rear lenses which illuminate interior of locker at night. A new feature is use of concave lenses for headlamps. It is claimed to trap a cushion of turbulent air against the glass, discouraging deposit of mud and insects; also reduces interior air volume in the lamp and so reduces possibility of mist and dust being drawn in to tarnish the reflector each time the lamp cools down.

For countries where dust is prevalent, the engine is provided with a second air filter, connected by a duct running through the body sills to an air intake in the luggage locker. This should cut down pollution in air going to the carburetor but obviously can only function effectively if the luggage locker itself is not completely airtight.

The engine compartment at the rear is insulated and allows unimpeded access to every part likely to require routine adjustment. Effective interior heating is provided by utilizing the hot air from the engine’s pressurized radiator. Ducts from round the fan bring air to the floorboards and windscreen and the driver can adjust the air temperature by a remote control blind covering the radiator on the air entry side.

The Renault Dauphine four-door sedan with French cloth trim will sell for about $1,495 in the U. S.; with artificial leather trim, approximately $1,535.

This new French car should provide the Volkswagen with some interesting competition. •