Modern Mechanix
Issue: Oct, 1930
Posted in: Aviation, History
No Comments on Freak Airships of the Ancients Reputed to Have Flown (Oct, 1930)

Freak Airships of the Ancients Reputed to Have Flown (Oct, 1930) 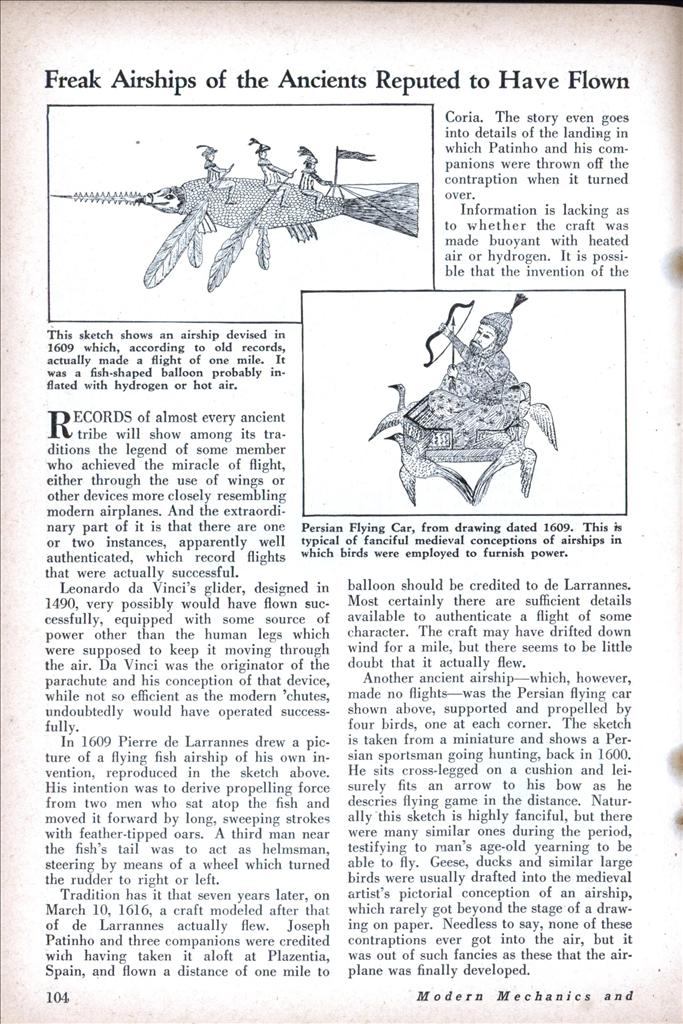 Freak Airships of the Ancients Reputed to Have Flown

RECORDS of almost every ancient tribe will show among its traditions the legend of some member who achieved the miracle of flight, either through the use of wings or other devices more closely resembling modern airplanes. And the extraordinary part of it is that there are one or two instances, apparently well authenticated, which record flights that were actually successful.

Leonardo da Vinci’s glider, designed in 1490, very possibly would have flown successfully, equipped with some source of power other than the human legs which were supposed to keep it moving through the air. Da Vinci was the originator of the parachute and his conception of that device, while not so efficient as the modern ‘chutes, undoubtedly would have operated successfully.

In 1609 Pierre de Larrannes drew a picture of a flying fish airship of his own invention, reproduced in the sketch above. His intention was to derive propelling force from two men who sat atop the fish and moved it forward by long, sweeping strokes with feather-tipped oars. A third man near the fish’s tail was to act as helmsman, steering by means of a wheel which turned the rudder to right or left.

Tradition has it that seven years later, on March 10, 1616, a craft modeled after that of de Larrannes actually flew. Joseph Patinho and three companions were credited with having taken it aloft at Plazentia, Spain, and flown a distance of one mile to Coria. The story even goes into details of the landing in which Patinho and his companions were thrown off the contraption when it turned over.

Information is lacking as to whether the craft was made buoyant with heated air or hydrogen. It is possible that the invention of the balloon should be credited to de Larrannes. Most certainly there are sufficient details available to authenticate a flight of some character. The craft may have drifted down wind for a mile, but there seems to be little doubt that it actually flew.

Another ancient airship—which, however, made no flights—was the Persian flying car shown above, supported and propelled by four birds, one at each corner. The sketch is taken from a miniature and shows a Persian sportsman going hunting, back in 1600. He sits cross-legged on a cushion and leisurely fits an arrow to his bow as he descries flying game in the distance. Naturally this sketch is highly fanciful, but there were many similar ones during the period, testifying to man’s age-old yearning to be able to fly. Geese, ducks and similar large birds were usually drafted into the medieval artist’s pictorial conception of an airship, which rarely got beyond the stage of a drawing on paper. Needless to say, none of these contraptions ever got into the air, but it was out of such fancies as these that the airplane was finally developed.