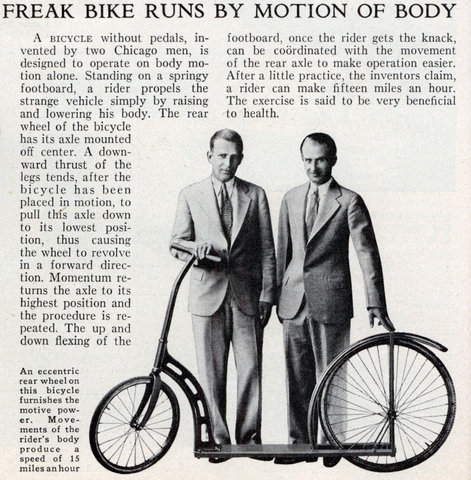 A bicycle without pedals, invented by two Chicago men, is designed to operate on body motion alone. Standing on a springy footboard, a rider propels the strange vehicle simply by raising and lowering his body. The rear wheel of the bicycle has its axle mounted off center. A down-ward thrust of the legs tends, after the bicycle has been placed in motion, to pull this axle down to its lowest position, thus causing the wheel to revolve in a forward direction. Momentum returns the axle to its highest position and the procedure is repeated. The up and down flexing of the footboard, once the rider gets the knack, can be coordinated with the movement of the rear axle to make operation easier. After a little practice, the inventors claim, a rider can make fifteen miles an hour. The exercise is said to be very beneficial to health.