I don’t have the last page of this article scanned in. 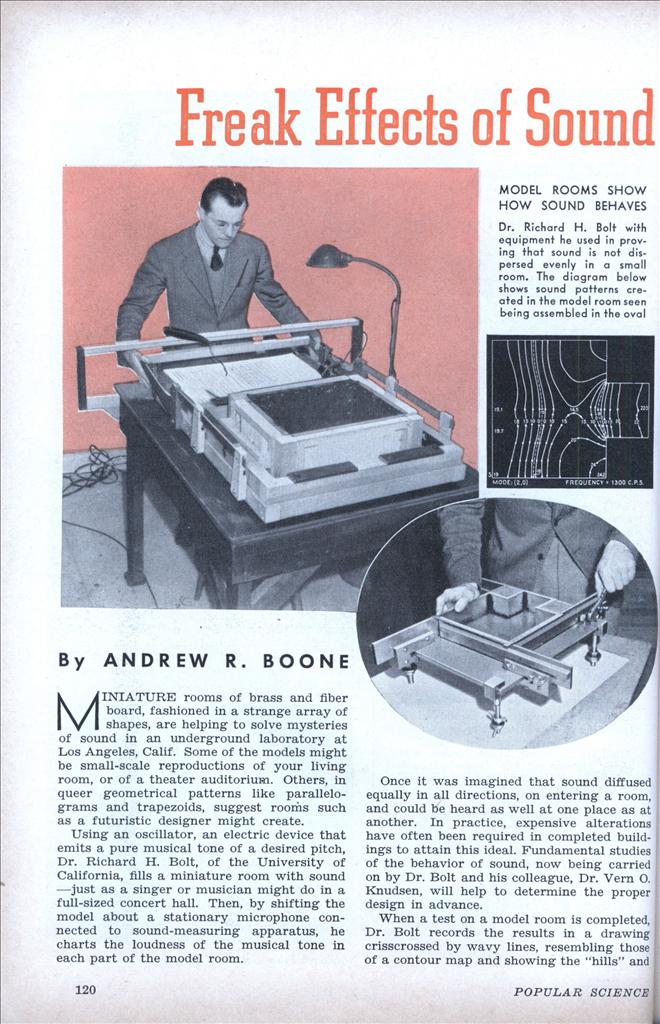 MINIATURE rooms of brass and fiber board, fashioned in a strange array of shapes, are helping to solve mysteries of sound in an underground laboratory at Los Angeles, Calif. Some of the models might be small-scale reproductions of your living room, or of a theater auditorium. Others, in queer geometrical patterns like parallelograms and trapezoids, suggest rooms such as a futuristic designer might create.

Using an oscillator, an electric device that emits a pure musical tone of a desired pitch, Dr. Richard H. Bolt, of the University of California, fills a miniature room with sound —just as a singer or musician might do in a full-sized concert hall. Then, by shifting the model about a stationary microphone connected to sound-measuring apparatus, he charts the loudness of the musical tone in each part of the model room.

Once it was imagined that sound diffused equally in all directions, on entering a room, and could be heard as well at one place as at another. In practice, expensive alterations have often been required in completed buildings to attain this ideal. Fundamental studies of the behavior of sound, now being carried on by Dr. Bolt and his colleague, Dr. Vern O. Knudsen, will help to determine the proper design in advance.

When a test on a model room is completed, Dr. Bolt records the results in a drawing crisscrossed by wavy lines, resembling those of a contour map and showing the “hills” and “valleys” of sound intensity. Solid lines connect test points where the loudness is equal, and accompanying numbers show how far it exceeds an arbitrary standard in the units known as decibels. High-numbered lines, where the sound is loudest, may in extreme cases be “whispering galleries.” Dotted lines with minus numbers represent “dead” spots, like a theater seat where you can scarcely hear a word that is spoken on the stage. The fault cannot be corrected merely by changing the shape of a room, hit-or-miss, since Dr. Bolt’s tests show that eliminating a “zone of silence” in one place may often set up a new one in another. The new studies are providing data for averting this.

Experiments on a larger scale confirm the tests with miniature rooms. Step down a passageway from the model-testing laboratory, and you will come to a “floating” room that rests upon a composite foundation of concrete, sand, and cork. An air space separates its foot-thick walls and ceiling from an outer concrete room. You enter, and its steel doors are closed. Now you could scarcely hear a cannon fired outside, but the buzzing of a fly in the room would be amplified almost to the roar of an airplane. The rigid walls of this “live room,” as the experimenters call it, are surfaced with shellac to make sounds echo and reecho as long as possible.

Dr. Bolt turns on a loudspeaker standing in a corner. It emits a sustained tone two octaves below middle C. While the sound continues, you walk diagonally across the room. At the corners of the chamber, the sound seems as much as four times as loud as at the center. This is the typical behavior of sound waves in a room, as shown by his models, Dr. Bolt explains.

He shuts off the loudspeaker. It takes exactly eleven seconds for the echoes to die away. That is “reverberation,” you are told. Too much of it spoils any advantage gained in loudness, by making a speaker’s words impossible to understand; you could hear him more plainly in the open air. Reverberation is reduced by putting any sound – absorbing material in the room. So perfect is the test chamber that even a hat, placed on the floor, observably diminishes the reverberation time.

There is a test to be made on a newly developed sound-absorbing material. A sixteen-foot square of it is laid on the floor. A wailing blast of sound from the speaker is suddenly cut off. In eight seconds the sound dies away—three seconds faster than before. Where did it go? “These blocks are porous,” explains Dr. Knudsen. “When a wave of sound hits them, it dashes into the holes like a breaker into rock caves on the seacoast. The energy is spent in tumbling about, and is converted into heat.” You wonder if this suggests the possibility of heating with sound waves, but you are soon disillusioned: “Two million men speaking at once would furnish as much heat as a single 100-watt electric-light bulb.”

WALKING farther down a long, dark corridor, you come to the experimenters’ “dead room.” Unlike the “live room,” this test chamber kills sound almost as soon as it is created. Burlap-covered frames, containing padding of mineral wool, make it only one thirtieth as reverberant as the other.

A huge parabolic reflector in the “dead room” projects sound in a beam, like that of a searchlight. A four-foot square of pressed redwood bark is placed at an angle to the beam, for a test. An assistant holds a microphone to pick up and record the reflected inclined plane.