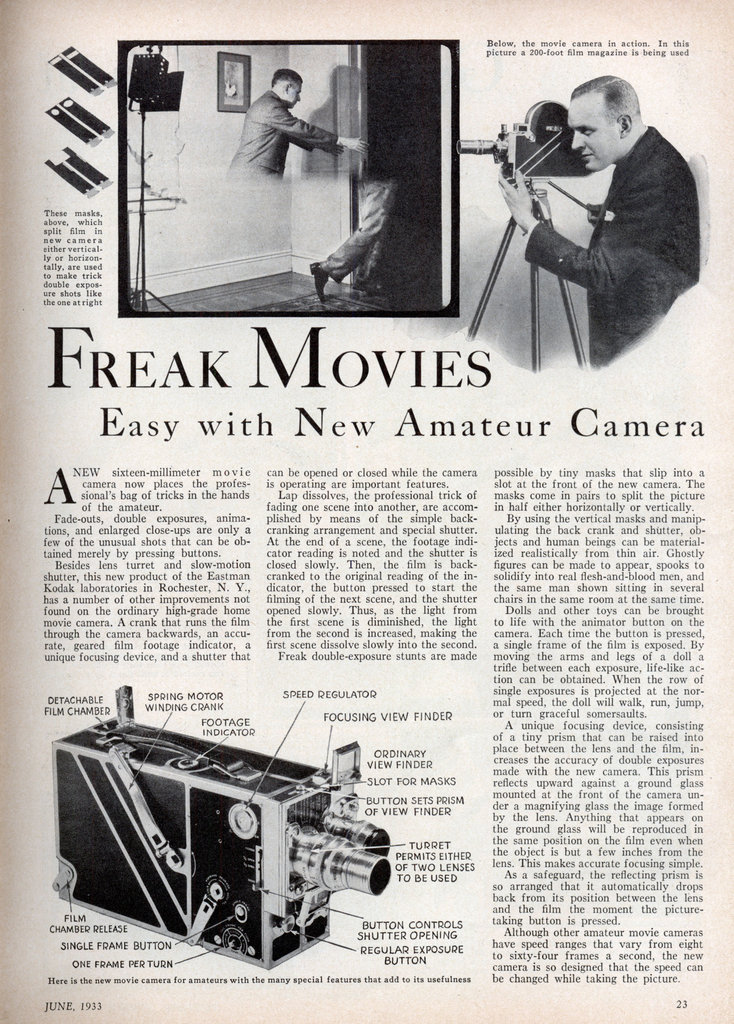 Lap dissolves, the professional trick of fading one scene into another, are accomplished by means of the simple back-cranking arrangement and special shutter. At the end of a scene, the footage indicator reading is noted and the shutter is closed slowly. Then, the film is back-cranked to the original reading of the indicator, the button pressed to start the filming of the next scene, and the shutter opened slowly. Thus, as the light from the first scene is diminished, the light from the second is increased, making the first scene dissolve slowly into the second.

Freak double-exposure stunts are made possible by tiny masks that slip into a slot at the front of the new camera. The masks come in pairs to split the picture in half either horizontally or vertically.

By using the vertical masks and manipulating the back crank and shutter, objects and human beings can be materialized realistically from thin air. Ghostly figures can be made to appear, spooks to solidify into real flesh-and-blood men, and the same man shown sitting in several chairs in the same room at the same time.

Dolls and other toys can be brought to life with the animator button on the camera. Each time the button is pressed, a single frame of the film is exposed. By moving the arms and legs of a doll a trifle between each exposure, life-like action can be obtained. When the row of single exposures is projected at the normal speed, the doll will walk, run, jump, or turn graceful somersaults.

A unique focusing device, consisting of a tiny prism that can be raised into place between the lens and the film, increases the accuracy of double exposures made with the new camera. This prism reflects upward against a ground glass mounted at the front of the camera under a magnifying glass the image formed by the lens. Anything that appears on the ground glass will be reproduced in the same position on the film even when the object is but a few inches from the lens. This makes accurate focusing simple.

As a safeguard, the reflecting prism is so arranged that it automatically drops back from its position between the lens and the film the moment the picture-taking button is pressed.

Although other amateur movie cameras have speed ranges that vary from eight to sixty-four frames a second, the new camera is so designed that the speed can be changed while taking the picture.