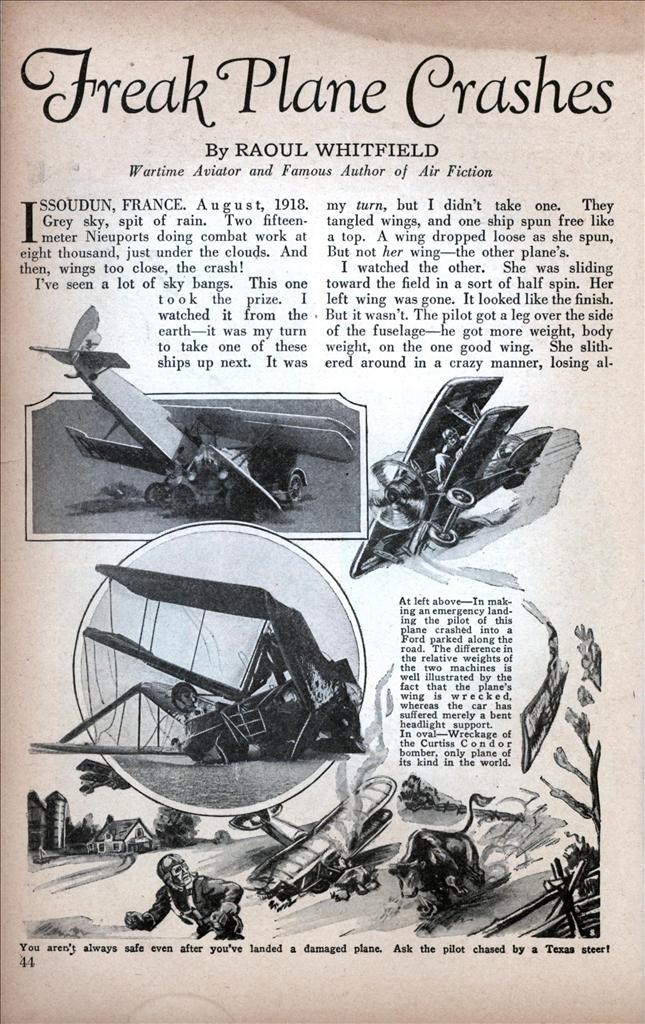 I’ve seen a lot of sky bangs. This one took the prize. I watched it from the earth—it was my turn to take one of these ships up next. It was my turn, but I didn’t take one. They tangled wings, and one ship spun free like a top. A wing dropped loose as she spun, But not her wing—the other plane’s.

I watched the other. She was sliding toward the field in a sort of half spin. Her left wing was gone. It looked like the finish. But it wasn’t. The pilot got a leg over the side of the fuselage—he got more weight, body weight, on the one good wing. She slithered around in a crazy manner, losing altitude in a series of queer dives and level-offs. The pilot was out of the cockpit—then in it again. He worked hard.

I looked for the other Nieuport. She was nosing straight for the earth—and pretty close. Suddenly she came out of the dive. She half zoomed, went off on a wing. She got level—lost altitude very slowly. She stalled, struck almost gently. My eyes went to the plane with only one wing. She was down to three thousand —and actually gliding! The pilot got down in a fast landing—got off with a broken leg and arm, and some cuts.

The other pilot had a scratch on his chin. And they’d sky-banged at eight thousand!

St. Jean de Monts, France. September, 1918. Flying at three thousand. Along edge of Bay of Biscay. Sergeant in rear cockpit, ready to throw out folded target, to be towed. I zoom her, so that the folded silk pack will have room in the toss. I start to zoom her. We hit a down current —the nose drops. Sergeant, off balance, throws back the silk. She jams between the rudder and elevator fins. I cut the power and try to move the elevator fin. No go. We glide for the beach—a mild glide. But we’re going to crash unless I can get the nose up. The stick is frozen —the silk target pack is jammed tight. All the way down I work. But that silk won’t free. We hit sand—the under-gear buckles. Wheels in one direction, struts in the other.

Ten days later, at the same field, a ground officer neglected to have petrol placed where petrol should be placed in a flying ship. DeHaviland Nine, she was. I took off, got about eight hundred feet over the beach, when the engine died abruptly. Couldn’t make the field—dove for the sand. I could use the controls, this time—but no power. Dropped straight for a half dozen of those bathing houses the French wheel down near the water. The bathers heard the D. H.’s wires shrill. They sped forth in various stages of dress and undress. But it wasn’t funny. Stretched the glide and cleared the last bath house by inches. Blew the left rudder in the set-down—nosed over. No personal damages.

Kelly Field, Texas. March, 1918. This particular cadet let a Curtiss “Jenny” skid on the ground, while taking off. He got her off, minus the landing gear. Just a few shreds left. They rolled out the ambulance, waved pieces of the under-gear up at him—and waited to see what he’d do. I’d like to write that he did the best thing—and stalled her down. But he didn’t. He stayed up until she was almost out of gas—and gave every one on the field a terrible hour. Then he made a fast forced landing. His plane pin-wheeled all over the place. The cadet had a broken nose and a lot of bruises.

Mines Field, Calif.—at the National Air Meet, last year. Lieutenant Hasselman, Navy pilot, was banking vertically around the home pylon, located some two hundred yards from the packed stands. He was doing about a hundred and fifty miles an hour, in a V. B. 2B Squadron, Boeing Pursuit ship. His plane’s nose got down when he had a wing to the sky, and a wing to the earth, about a hundred feet below. She slipped off, but he got her fairly righted before she struck dirt. It was a nasty crash. She pin-wheeled several times. The friend with me was very certain, with his view from the dead-line, that the pilot was finished. But I remembered past air crashes and ground crack-ups. I wasn’t so sure. Five days after the crash the pilot was transferred to a big Fokker hospital plane and winged back to his base at San Francisco.

Fatal air accidents, however, are becoming rarer all the time. The parachute saves hundreds of lives every year. They have even perfected parachutes which can lower a disabled airplane safely to the ground. Huge chutes they are, and mighty effective1. Passengers aboard tomorrow’s transport planes need have no worry in the very unlikely event that their machines crash in the air, as depicted on the cover of Modern Mechanics this month. All they’ll have to do will be to pull a lever and, zip! The chutes grab hold and the planes drift easily to earth.