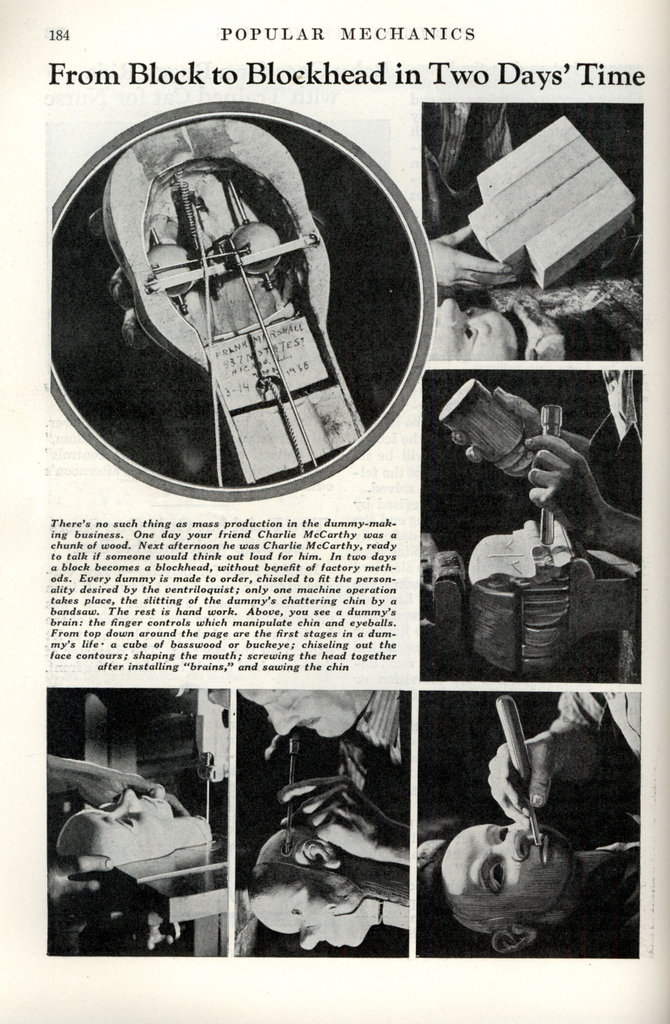 From Block to Blockhead in Two Days’ Time

There’s no such thing as mass production in the dummy-making business. One day your friend Charlie McCarthy was a chunk of wood. Next afternoon he was Charlie McCarthy, ready to talk if someone would think out loud for hint. In two days a block becomes a blockhead, without benefit of factory methods. Every dummy is made to order, chiseled to fit the personality desired by the ventriloquist; only one machine operation takes place, the slitting of the dummy’s chattering chin by a handsaw. The rest is hand work. Above, you see a dummy’s brain: the finger controls which manipulate chin and eyeballs. From top down around the page are the first stages in a dummy’s life a cube of basswood or buckeye; chiseling out the face contours; shaping the mouth; screwing the head together after installing “brains,” and sawing the chin.

Chiseling Dummies Is a One-Man Industry

“Daddy” of most stage dummies, including impish Charlie McCarthy, is Frank Marshall of Chicago. For twenty years he has been carving blockheads and marionettes for the theatrical trade; skilled fingers, a tool chest full of assorted chisels, a bandsaw and paintbrush his principal tools. The dummy starts as four slabs of wood glued into a block, with paper glued in the center so that the head can be split apart and hollowed out. Simplest of dummies have only a movable chin, but Mr. Marshall will, if you like, install eyes that roll from side to side, and a winking eyelid; or a soft leather upper lip that curls upward in a smile revealing a nice set of teeth. The mouth can be manipulated by a remote-control air bulb. In the circle is a split head, the wobbling chin sawed out, ready for installation of mechanism. Below, touching up eyebrows and complexion with special dull-finish paint containing pumice. Right, Mr. Marshall has a farewell chat with one of his “babies”