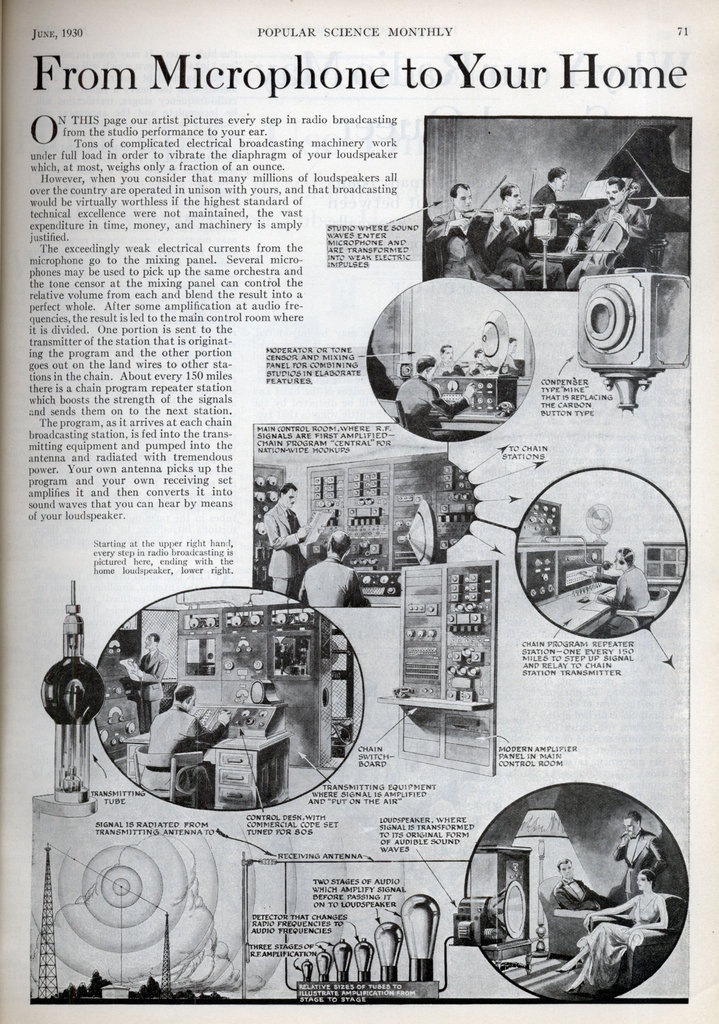 From Microphone to Your Home

ON THIS page our artist pictures every step in radio broadcasting from the studio performance to your ear.

Tons of complicated electrical broadcasting machinery work under full load in order to vibrate the diaphragm of your loudspeaker which, at most, weighs only a fraction of an ounce.

However, when you consider that many millions of loudspeakers all over the country are operated in unison with yours, and that broadcasting would be virtually worthless if the highest standard of technical excellence were not maintained, the vast expenditure in time, money, and machinery is amply justified.

The exceedingly weak electrical currents from the microphone go to the mixing panel. Several microphones may be used to pick up the same orchestra and the tone censor at the mixing panel can control the relative volume from each and blend the result into a perfect whole. After some amplification at audio frequencies, the result is led to the main control room where it is divided. One portion is sent to the transmitter of the station that is originating the program and the other portion goes out on the land wires to other stations in the chain. About every 150 miles there is a chain program repeater station which boosts the strength of the signals and sends them on to the next station.

The program, as it arrives at each chain broadcasting station, is fed into the transmitting equipment and pumped into the antenna and radiated with tremendous power. Your own antenna picks up the program and your own receiving set amplifies it and then converts it into sound waves that you can hear by means of your loudspeaker.