From Ten Parts You Can Build Twenty Model Planes (Aug, 1931) 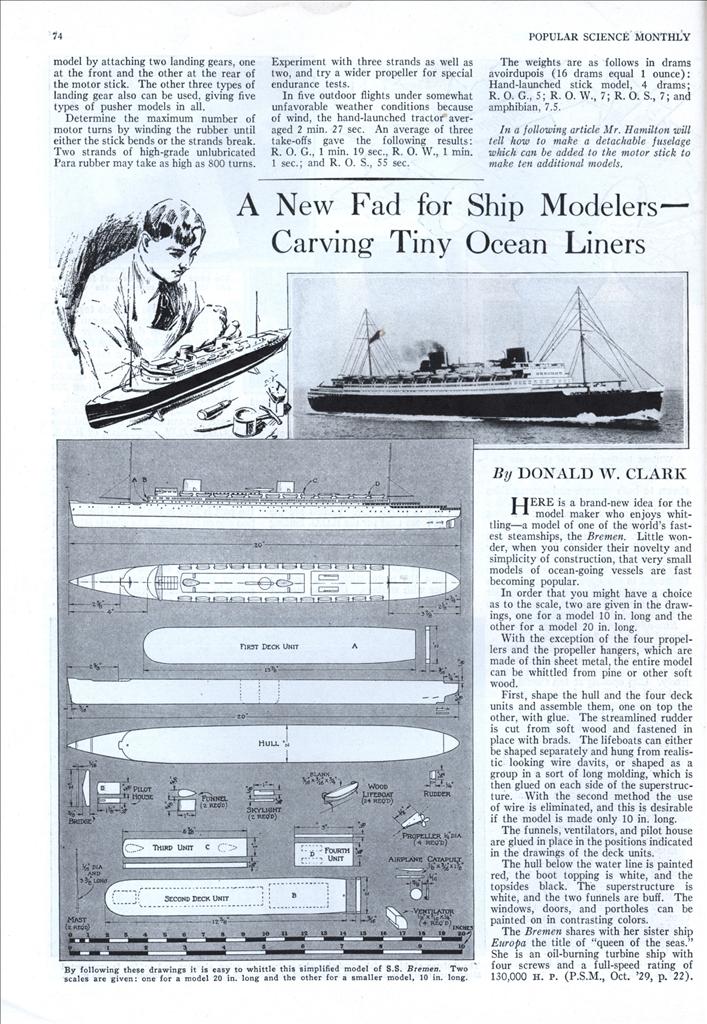 From Ten Parts You Can Build Twenty Model Planes

THIS single-stick airplane model of ten simple parts is so designed that it can be converted into twenty different types of flying models. It opens new fields for the model enthusiast to conquer. Through building it, the beginner can master a variety of construction methods while actually expending the time and material necessary to make only one model; and the expert can adapt the principles for use on any pet model of his own. To the best of the writer’s knowledge, the model is the first of its type.

During the designing, building, and testing of the model, several more complicated methods of construction were developed which might have been improvements, but simplicity was given the preference at all times. Experienced model makers should look upon this design—or, indeed, any design—mainly as a basis on which to build and experiment, but beginners should follow the plans closely so as to be certain of satisfactory flying results.

After you have constructed and flown the model, carry it to the next meet. It will enable you to enter a variety of contests and give you a much better chance of winning a prize.

In this article the ten single-stick arrangements will be described, while the ten fuselage variations will be explained in a following article.

To insure your success in building this remarkable combination of models, two sheets of blueprints (Nos. 135 and 136) have been prepared with full size drawings of all the parts. These can be obtained for fifty cents from the Blueprint Service Department (see page 91).

Motor Stick. Prepare a % by by 15 in. balsa stick. Bend the usual rear hooks and can hooks from No. 6 (.016 in.) piano wire and cement in place, and attach a propeller bearing. In the opposite end of the stick, cut a 1/16 by 1/8 in. slot, in. deep; this holds the rudderpost when the model is assembled as a tractor. Two No. 6 piano wire clips also are attached as shown at the front end of the stick and on the edge opposite the propeller bearing.

Wing. Leading and trailing edges of 1/16 by 1/8 in. balsa. Five 1/32 by 1/16 in. ribs with a 5/32 in. camber. Large wing clips of No. 6 piano wire are cemented as shown to both concave and convex sides of the wing. Cover wing on convex side only with Japanese tissue. Give one coat of diluted dope.

Rise-off-Ground Landing Gear. Shaped from No. 8 piano wire (.0197 in.). Wheels are of 1/16 in. sheet balsa. Rolled paper is cemented in the axle hole of each to allow the wheels to turn freely. Clip opening at top should be % by in. Two of these landing gears are necessary.

Rise-off-Snow Landing Gear. The skis are of 1/16 by by 8 in. bamboo, curved at their front ends. Two 1/16 by 3/8 in. balsa upright braces are cemented to each ski and are held together at the top with No. 6 piano wire clips, as indicated. A 1/32-in. split bamboo cross brace is cemented through the front uprights and the small triangular braces. The front uprights, braces, and bamboo cross brace are cemented together to the skis.

Rise-off-Water Landing Gear. Cut two triangular balsa ends from 3/64-in. sheeting and six balsa bulkhead pieces from 1/32-in. sheeting. One bulkhead is made by cementing three of the latter together. Complete both at this time. The pontoon stringers are of 1/16 in. square split bamboo cemented to the triangular balsa end piece and the three-ply balsa bulkhead. Cover the structure with Japanese tissue and dope it well.

Two 1/16 by 3/32 in. balsa uprights are cemented to each pontoon and are joined with No. 6 piano wire clips. Split bamboo braces are cemented in place as shown.

Amphibian Landing Gear. Cement two axles to the outer edges of the two pontoons as illustrated. These are shaped from No. 8 piano wire. Wheels are the same as those used for the R.O.G. landing gear.

To assemble the hand-launched tractor, attach thy elevator to the rudderpost by the elevator clips. Insert the rudder-post into the motor-stick slot. Attach propeller with washers. Use one loop of 1/16-in. square Para rubber 30 in. long as the motor. Tie the ends together, pass the rubber through the can hook, and fasten it to the propeller shaft and the rear hook. Attach the wing to the underside of the motor stick, using the clips on the convex side of wing. First test for a long smooth glide, then wind the motor from 200 to 400 turns and launch the model.

By adding the appropriate landing gear, you can convert this model into an R.O.G., R.O.W., amphibian, or R.O.S.

To assemble the hand-launched pusher, attach the elevator to the clip brace on the motor stick. Fasten the rudder to the motor stick by the two front motor-stick clips. The rudderpost projection slips through the loop clip, while the rear of the post is held in the jaws of the regulation clip on the stick. The wing is attached to the motor stick by the two clips on its concave side. When the model is a pusher, the wing rests on top of the stick; when a tractor, on the bottom. Attach pusher propeller, or wind tractor propeller in opposite direction.

This pusher is converted into an R.O.G.

model by attaching two landing gears, one at the front and the other at the rear of the motor stick. The other three types of landing gear also can be used, giving five types of pusher models in all.

Determine the maximum number of motor turns by winding the rubber until either the stick bends or the strands break. Two strands of high-grade unlubricated Para rubber may take as high as 800 turns.

Experiment with three strands as well as two, and try a wider propeller for special endurance tests.

In a following article Mr. Hamilton will tell how to make a detachable fuselage which can be added to the motor stick to make ten additional models.

HERE is a brand-new idea for the model maker who enjoys whittling—a model of one of the world’s fastest steamships, the Bremen. Little wonder, when you consider their novelty and simplicity of construction, that very small models of ocean-going vessels are fast becoming popular.

In order that you might have a choice as to the scale, two are given in the drawings, one for a model 10 in. long and the other for a model 20 in. long.

With the exception of the four propellers and the propeller hangers, which are made of thin sheet metal, the entire model can be whittled from pine or other soft wood.

First, shape the hull and the four deck units and assemble them, one on top the other, with glue. The streamlined rudder is cut from soft wood and fastened in place with brads. The lifeboats can either be shaped separately and hung from realistic looking wire davits, or shaped as a group in a sort of long molding, which is then glued on each side of the superstructure. With the second method the use of wire is eliminated, and this is desirable if the model is made only 10 in. long.

The funnels, ventilators, and pilot house are glued in place in the positions indicated in the drawings of the deck units.

The hull below the water line is painted red, the boot topping is white, and the topsides black. The superstructure is white, and the two funnels are buff. The windows, doors, and portholes can be painted on in contrasting colors.